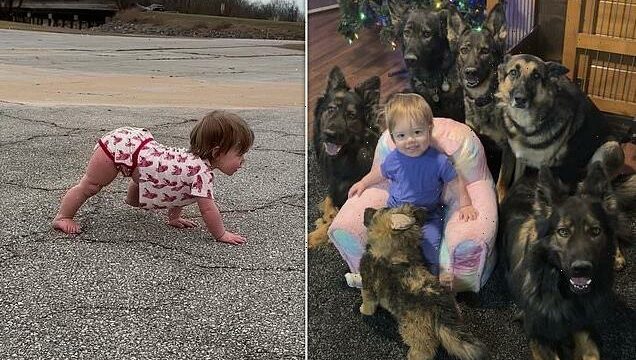 I wanna walk like you! Real-life ‘Mowgli’ girl raised with six German Shepherds goes around on all fours, uses the doggy door and even steals their kibble

A toddler has been dubbed ‘Mowgli’ by her mother, after she learnt to walk on all fours like The Jungle Book character.

River Shell who has been raised with her mother’s six German Shepherds has not just learnt to walk on all fours but also eats dog food when she gets the chance.

When the tot was first born, her mother, Ashley Shell, 31, claimed she was nervous about how the pack of large dogs would take to the tiny baby.

However, the 31-year-old, from Tulsa, need not have worried as the dogs instantly became best friends, accepting River like one of their own. 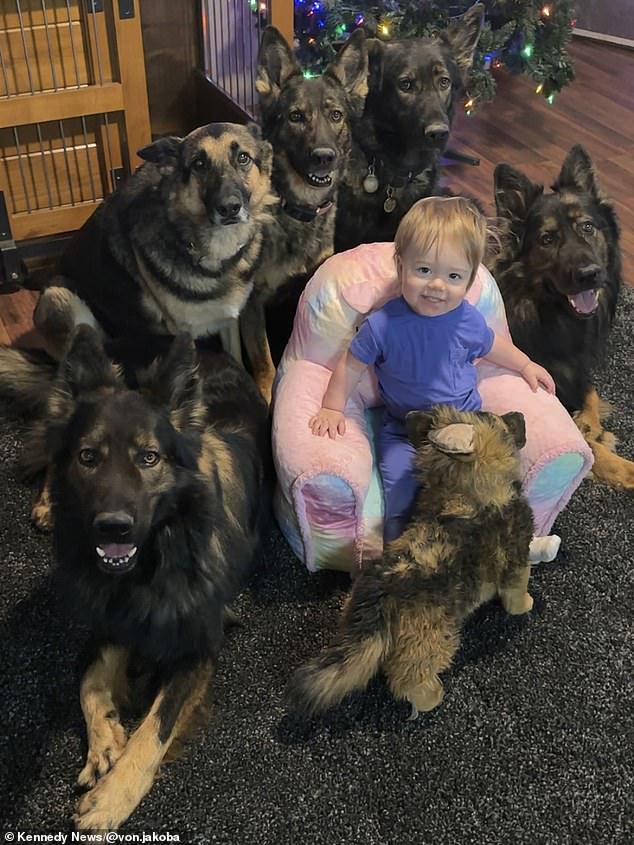 River Shell, a toddler from Tulsa, has been dubbed ‘Mowgli’ by her mother, after learning to walk on all fours like a dog. She is pictured here with five her mother’s dogs

Now inquisitive River enjoys playing with pooches, Meeka, Kai, Ryker, Koba, Brenna and Roma, so much every day that she has started to act like an adorable pooch herself.

Not only did the little girl begin to walk on all fours like her furry friends, influencer Ashley claims she has started climbing through the dog flap.

In a clip shared by Ashley, River is first seen as a helpless newborn with the animals surrounding her curiously, before she is more recently filmed playing with their water bowl.

The cute toddler likes to sit in their crate and play with her toys and even sneakily tries to eat their food ‘any chance she gets’ – with footage capturing Ashley appearing to have to fish around in her mouth to retrieve some kibble. 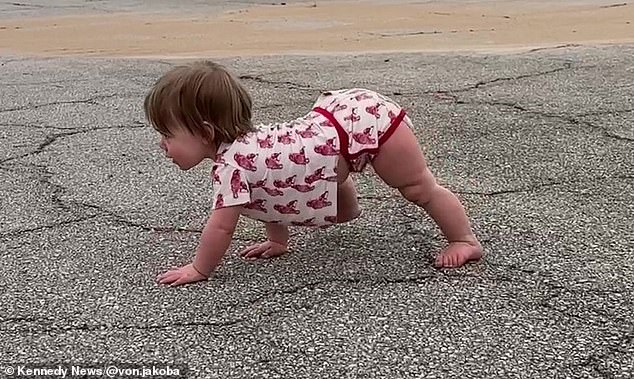 The toddler has learnt to walk on all fours like her furry friends. River (pictured) loves playing with her mother’s six German Shepherd dogs 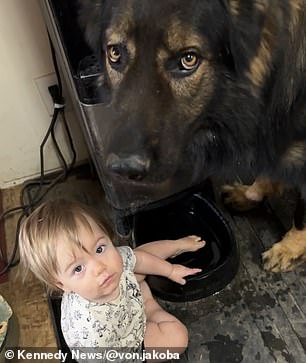 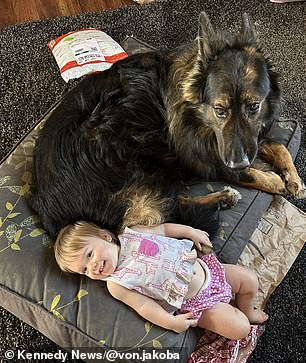 River has been filmed by her mother Ashley, 31, playing in the dogs’ water bowl and learning to be gentle with the dogs 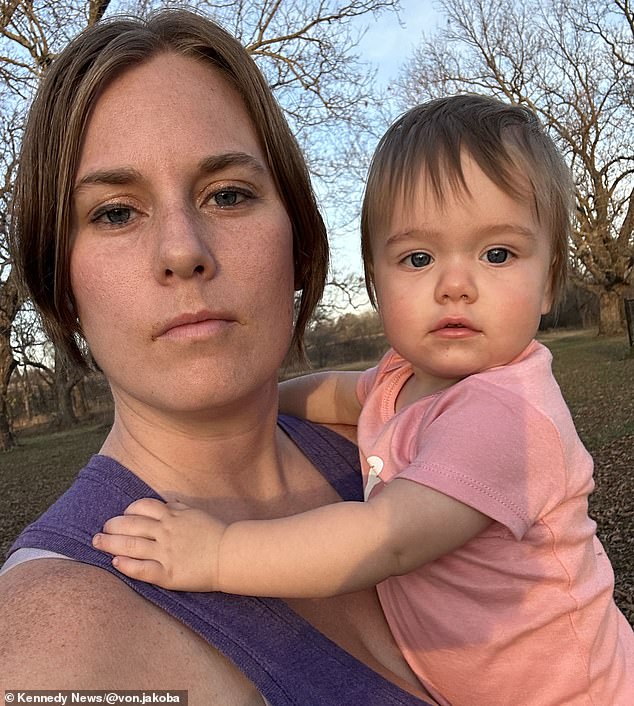 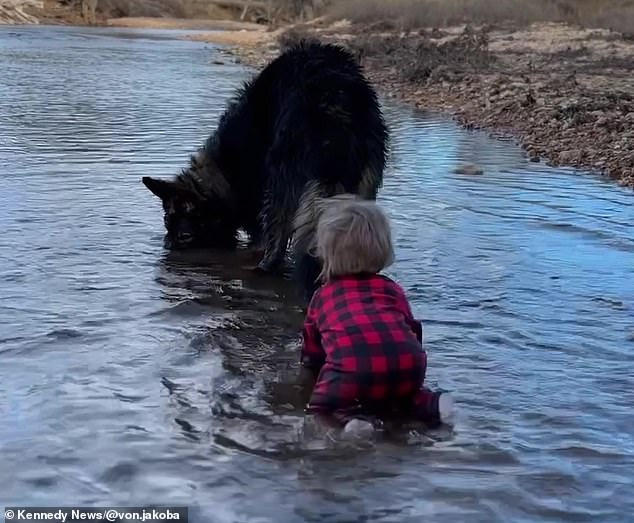 After sharing the video on TikTok, Ashley’s video attracted more than 9.1million views and more than 2million likes and comments.

Ashley explained: ‘When she was around eight months old, she started watching them and trying to copy what they were doing.

‘She loves playing in their water if we forget to pick it up and she tries to sneak dog food any chance she gets. She recently started trying to follow them out the doggy door.’ 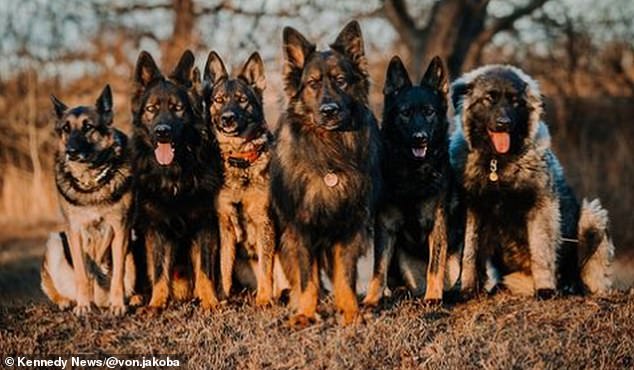 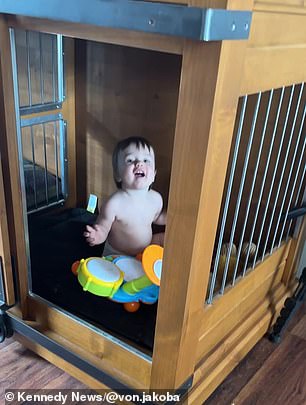 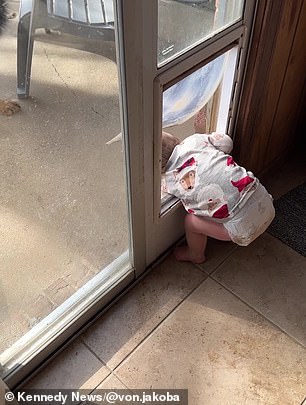 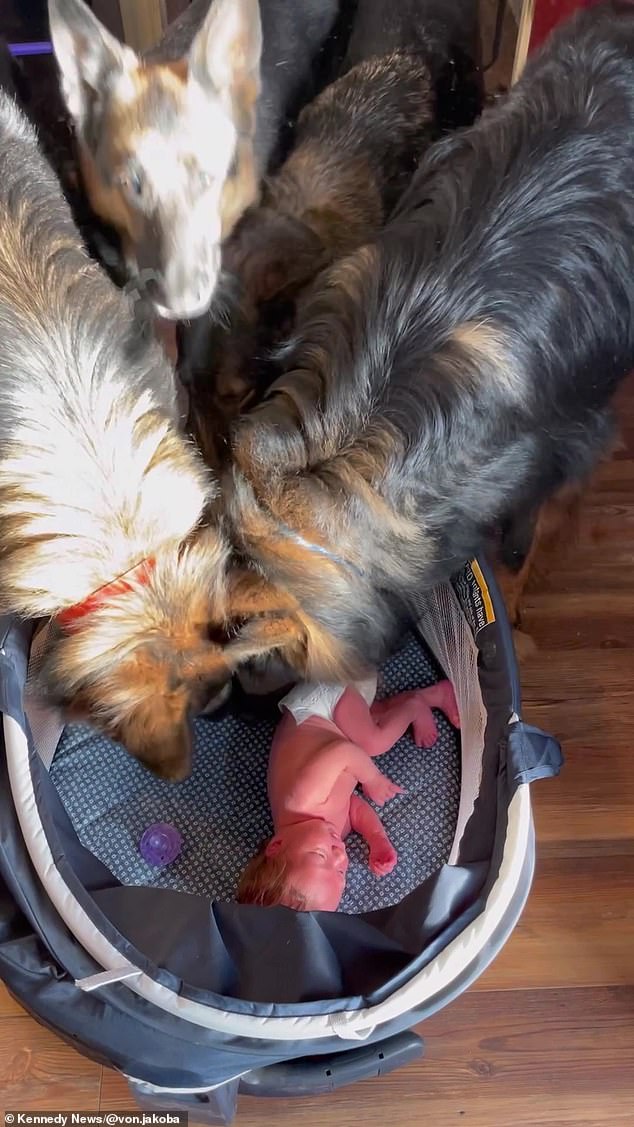 In a clip shared by Ashley, River is first seen as a helpless newborn with the animals surrounding her curiously

Ashley explained how her German Shepherds were gentle but curious from the start, when River was a baby and that River is still learning to be gentle around them by petting and hugging them.

Ashley said: ‘River usually smiles at them when she sees them and goes to give them a hug or kiss. She tries to say their names.’

After the clip was posted on social media, some viewers joked about her having a ‘great immune system’ – while others saw the comparison with Rudyard Kipling’s Mowgli character.

One viewer said: ‘She will have a great immune system. I think it’s awesome!’

Another follower said: ‘That’s the cutest thing I’ve ever seen.’

A fellow dog owner said: ‘Not the Mowgli walk.’

Another mum said: ‘A what a happy lovely baby she is.’