Tom Brady may be riding high on his way to his tenth Super Bowl this weekend, but Jimmy Kimmel has just the tweets to bring him back down to earth.

Many sports critics think Tom Brady may well be the best quarterback in the history of the NFL. He certainly made a strong case for that by taking Tampa Bay to the Super Bowl in his first season, but haters still gonna hate!

Maybe it’s because he is so consistently good at what he does — and has been for two decades now — that there is so much backlash against him, but Brady has always seemed to take it in stride. 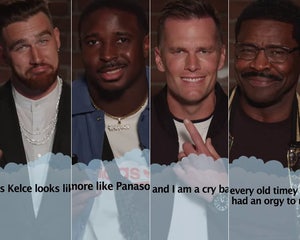 Nine previous Super Bowl appearances, and six titles, probably goes a long way to helping him feel better about all the haters in the world.

But just in case he was getting a little ahead of himself heading into Sunday’s big game against defending champs the Kansas City Chiefs, Jimmy Kimmel lined up enough “Mean Tweets” to give Tom Brady his very own segment.

There’s another record he can claim!

Right off the bat, Tom was feeling pretty good about the tweets, agreeing with the first one that he looks like the kind of guy who doesn’t know how to use a wrench.

But the good times didn’t last, with the very next tweet leaving him a little confused. “I’m Tom Brady and I am a cry baby and I have a butthole in my chin!” he read. Pointing at his chin, he only repeated the word, “Butthole?”

Another one took aim at a similar target with even more aggressive language, with Brady reading, “F— you, Tom Brady, you fat bitch, I hope you cry.”

Someone else was clearly projecting some jealousy, even going so far as to invoke Brady’s wife Giselle Bündchen. “I hope this loss depresses you so bad that you can hardly have sex with your supermodel wife in your giant mansion.”

What could Tom even say to what was basically a compliment about how great his life is. “I have no comment to that,” he said, miming zipping his lips closed.

Things only escalated from there, with Brady taking each darker and deeper insult with grace … until they finally crossed a line.

Even Kimmel conceded, “That’s Tom’s line — and you crossed it!”

Got a story or tip for us? Email TooFab editors at [email protected].