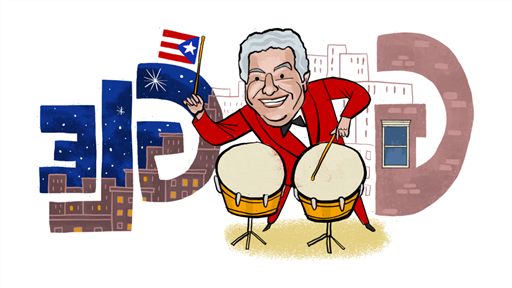 Tito Puente, the influential Nuyroican musician and entertainer, is being honored in a new animated Google Doodle.

The animated doodle highlighting Puente’s musical career, illustrated by New York-based Puerto Rican artist Carlos Aponte, will be visible on the main page of the search engine throughout Tuesday (Oct. 11). The doodle coincides with U.S. Hispanic Heritage Month and also comes on the one-year anniversary of the unveiling of the Tito Puente Monument in New York City’s East Harlem.

Puente was a percussionist, composer, songwriter, recording artist and bandleader whose career spanned five decades. Puente has been called “El Rey de los Timbales” and “The King of Latin music,” having recorded some 118 albums and being credited on dozens more — more than any other timbales bandleader to date.

Puente was born on April 20, 1923, in New York City’s Spanish Harlem and died June 1, 2000. He was surrounded by Puerto Rican, Cuban and big band music growing up, and displayed significant musical talent from an early age. He started his career as a drummer in his early teens and found his big break playing for Federico Pagani’s Happy Boys and Machito’s Orchestra. He served in the Navy during World War II, playing alto saxophone as the ship’s bandleader — along with more than 10 other instruments. He continued his studies at New York City’s Juilliard School of Music after the war.

He started his own band, the Tito Puente Orchestra, in 1948 and quickly earned a reputation for his performances that encouraged audiences to get on the dance floor. His parade of hits began with “Ran Kan Kan,” Puente’s first professional track recording, which serves as the soundtrack of the Google Doodle.

Beyond the mambo movement, Puente experimented across other genres of Latin music such as the Boogaloo, Pachanga and eventually Salsa. He was considered a musical pioneer for his creativity and experimentation, and is widely credited for popularizing Latin music in the U.S.

In 1969, he was awarded the key to New York City and and the Harlem street where he grew up — E. 110th Street — was renamed Tito Puente Way. Puente also was deeply dedicated to creating opportunities for the Latin community. In 1979, he introduced a scholarship fund that supported promising young Latin percussionists for more than 20 years.

In announcing the Google Doodle, the company gave special thanks to Tito Puente’s son, Tito Puente Jr., for his collaboration on the project.

You can also watch the 65-second animated doodle on YouTube: