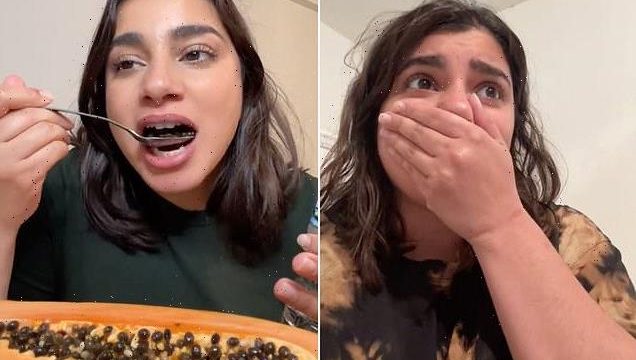 The worst wellness trend EVER? TikTok star tests out bizarre ‘parasite’ cleanse in viral video that sees her eating raw papaya seeds and claiming they made her ‘pass grey WORMS in her stool’

A TikTok user has gone viral after starting a trend that involves eating papaya seeds in a bizarre effort to help pass any parasites that might be in your body.

The US-based woman, known only as Ramena, filmed herself eating spoonfuls of the seeds after watchin a video which claimed that they are a natural antiparasitic.

Ramena, who has 193,100 followers on TikTok, then decided to sample the seeds for herself, in a bid to find out if she had ‘any bugs in my butt’ – a process that she documented for her fans on the social media platform, sparking a slew of questions and comments about the quirky process.

‘There was a TikTok that was talking about how the seeds of a papaya are antiparasitic, so I’m like, “Hmm, I wonder if I have any bugs up my butt?”‘ she told her followers while holding up a half of the fruit. 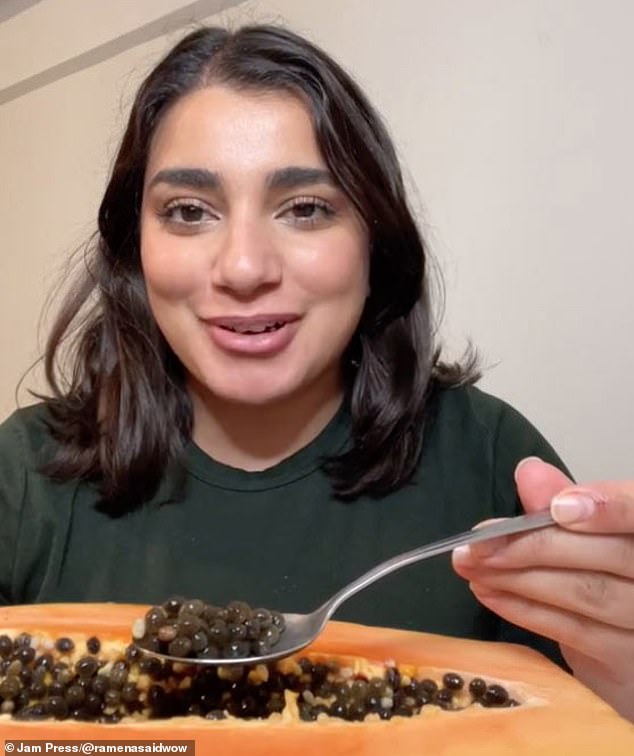 Experiment: A TikTok star has earned viral fame after testing out a bizarre ‘parasite’ cleanse that involves eating raw papaya seeds in order to expel any intestinal worms from the body 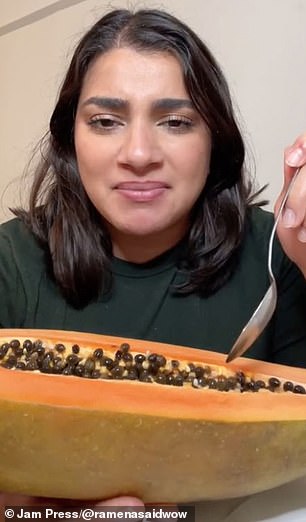 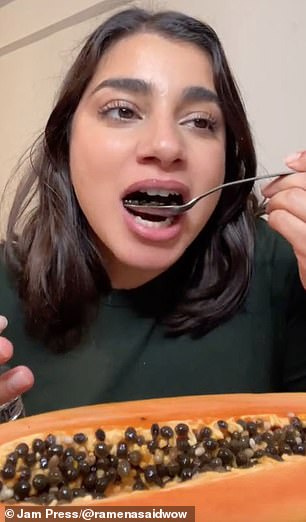 Oh dear: The US-based TikToker, known only as Ramena, attempted the cleanse during a TikTok video, in which she admitted that the seeds tasted like ‘dry erase marker’

Typically, an antiparasitic is a type of medicine that is taken to kill any parasites that may be present in a person’s body – or to inhibit further growth of the parasite.

What are intestinal parasites and what causes them?

There are several different types of intestinal parasites, also known as intestinal worms or parasitic worms, however the most common are flatworms and roundworms.

Parasitic worms can live in the intestine for years without causing any pain or discomfort, however some sufferers may include symptoms such as:

There are a number of causes of intestinal worms – which are most common in children and elderly people, particularly those living in underdeveloped areas – including poor hygiene, a weakened immune system, unclean water, and undercooked meat.

Ordinarily, doctors prescribe medicine as the most common form of treatment, however changes to diet may also be recommended, as well as the introduction of supplements.

Natural remedies, like papaya seeds, are popular, but these are not always recommended by medical professionals.

Prescribed antiparasitic medicine usually includes an antibiotic, and they have to be recommended to patients by professional doctors and medical experts, who usually put patients through a series of tests in order to confirm the presence of a parasite.

However, there are several ‘natural’ parasitics, like papaya seeds, as well as garlic and honey, that are touted by some as an alternative to cleanse the body of any intestinal worms by killing off the parasite, allowing it to be passed out of the body in feces.

There is very little professional research to suggest that these natural antiparasitics are actually effective, however that didn’t stop Ramena from testing the papaya seed option out, while documenting her experience for the world to see.

After giving a brief explanation about why she is eating the seeds, Ramena then spoons one of them into her mouth, remarking that it’s ‘not bad’ before consuming more of the seeds – which quickly made her change her mind about their taste.

‘OK that’s disgusting, it’s like dry erase marker and it was absolutely disgusting,’ she concludes, before adding: ‘I’ll let you guys know if I poop out any worms.’

True to her word, the influencer later followed up her initial post with a second clip, in which she updated her followers on the progress of her papaya seed experiment, revealing that she ended up consuming the seeds from one full half of the fruit.

Ramena explained that the seeds did have an impact on her bowl movements, and noted that she believed she had passed a parasite in the hours after she ingested the papaya.

‘It is almost one in the morning,’ she explained in her follow-up video. ‘I ate half of a papaya’s worth of seeds, which I don’t think I was supposed to do, but I pooped three times in a couple of hours, and I haven’t pooped in days.

‘I’ve pooped out one parasite so far.’

The influencer admitted that she felt strange about documenting her bathroom habits with thousands of viewers around the world, joking: ‘I can’t believe this is my life. I’m literally on the internet right now with God knows how many people…’

While the experiment appears to have had the intended results in so far as helping Ramena to pass parasites out of her system, she urged anyone else who is planning to test the process to check with their doctor before going ahead – confessing that the papaya seeds had also left her with some unpleasant side effects.

‘After having gone through the process, I definitely, definitely say check with your doctor first before doing anything because there were a couple of times where I was having really bad heartburn and I was so nauseous,’ she revealed.

‘I didn’t want to move around. I was kind of starting to develop a headache. I did not feel good at all. There were times when I was like, this was so stupid of me because I have no idea what’s going to happen next and I don’t feel good in this moment.

‘This whole process was so crazy, I am absolutely exhausted. I’ve felt nauseous all day, I couldn’t eat, I didn’t eat anything until not too long ago.’

As for the parasites that Ramena says she was able to expel in her feces, she claims that they were easily identifiable because of their worm-like appearance.

‘I had one final poop, no seeds came out, and I did pass another parasite, so I was able to get two parasites out of my body, which took… I look like I’m dead,’ she told her followers.

‘A lot of people were also asking how I know it’s a parasite. It looks very, very different from your stool – they literally are grey, well mine were, and they literally look like a worm shape.’

Ramena concluded that she won’t be eating papaya seeds again for a long time and claims she will need to ‘mentally and physically prepare herself’ better the next time she attempts the challenge.

The original video has racked up more than 700,000 likes, with thousands of people taking to the comments section to share their shock.

One person said: ‘Would try this but I’m scared of worms and if I see that coming out I think I would die right there and then.’

‘The worms are the ones making you think it tastes bad, don’t listen,’ another person joked, while one commented: ‘I’ve never been so excited for someone’s next bowel movement before.’

Viral: Her videos racked up millions of views and were flooded with comments from inquisitive viewers, some of whom said they want to try the cleanse for themselves

Say what? Some people were fascinated by the cleanse, while others were left completely baffled by the concept

‘What in the name of the lord did I stumble into,’ another person wondered.

‘How’d I get on poo TikTok?’ said another viewer.

One person commented that they were ‘terrified’ of passing a parasite, while others were left scared by Ramena’s results.

But some viewers were inspired to try the challenge themselves with a bizarre trend now emerging on the social media platform.

One person said: ‘The fact that you really pooped out a parasite makes me wonder if I have any, so now imma do it.’ [sic]

‘I am doing a full on parasite cleanse. Sadly, the US is the only country that doesn’t do this yearly or twice a year. It’s real, we all have them,’ another person claimed.

Other viewers advised blending the seeds with pieces of papaya and drinking it to help the taste.

It is advised to consult your doctor if you are concerned about having parasites or are considering attempting a non-prescribed method for dealing with these – and some medical professionals advise against trying any form of natural remedy.

Speaking to Health magazine, infectious disease expert Amesh A. Adalja MD, a senior scholar at the Johns Hopkins Center for Health Security, warned that papaya seeds are not proven to be effective in the treatment of parasites.

‘This has not been shown to be effective outside of a clinical trial setting,’ he said.

‘Certain foods have compounds in them that might have the ability to kill certain parasites and cause them to be expelled from your body, but there’s no definitive data to suggest you should alter your diet to make it anti-parasitic.’