Two in three Australians aged over 15 are working and the number of people looking for a job or underemployed has dropped to its lowest level in 40 years, adding to pressure on the Reserve Bank to accelerate interest rate rises to rein in inflation.

The jobless rate was steady at 3.9 per cent last month, Australian Bureau of Statistics figures show, with an extra 60,600 people gaining work while 7800 became unemployed. It was the seventh consecutive increase in employment since coronavirus pandemic lockdown restrictions started lifting late last year. 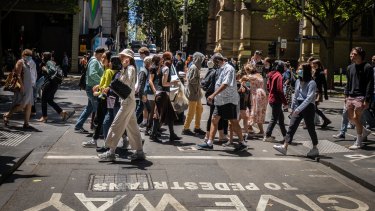 The number of people in jobs increased by nearly 61,000 in May, according to the ABS.Credit:Scott McNaughton

Unemployment in Victoria dropped to 3.7 per cent, breaking the state’s previous record low of less than 4.1 per cent reached in January, while in NSW it rose half a percentage point to 4 per cent.

Treasurer Jim Chalmers welcomed the labour force figures but warned there were economic challenges ahead.

“[It’s] tempered by significant challenges elsewhere in the economy including high and rising inflation, falling real wages and global concerns,” he wrote on social media on Thursday.

Shadow treasurer Angus Taylor said the figures showed how robust the economy was ahead of the federal election, but the Labor government must carefully manage inflationary pressures.

“It’s up to Labor to deal with this now and the key to it is a sensible, conservative approach to fiscal policy,” he said.

Economic growth and productivity will be front and centre when Prime Minister Anthony Albanese holds his first meeting with state and territory leaders on Friday.

The RBA this month lifted the official cash rate by half a percentage point to 0.85 per cent and flagged more increases as it works to curb inflation, which it expects to near 7 per cent by the end of the year.

Some economists warned the strong jobs figures, combined with the independent pay umpire’s decision on Wednesday to give Australia’s lowest-paid workers a $40-a-week pay rise, would add to inflationary pressures and could force the RBA to raise rates higher and faster.

AMP chief economist Shane Oliver said all the ingredients were in place for the RBA to raise rates by another half a percentage point in July.

To two decimal points, the unemployment rate rose slightly from 3.86 per cent in April to 3.90 per cent as people who were not in the labour market started looking for work.

Workforce participation rose to a record 66.7 per cent and the number of 15- to 24-year-olds in employment rose 1 percentage point to 71.9 per cent – the highest level of youth participation since October 1996.

The underemployment rate fell to a 14-year low of 5.7 per cent while the underutilisation rate dropped to 9.6 per cent – its lowest level since April 1982.

UBS economists said the drop in underutilisation – which combines unemployment and underemployment – showed there was shrinking spare capacity in the labour market.

“Overall, this argues for rapid RBA rate hikes ahead,” they said, adding the minimum wage rise and the US Federal Reserve’s 0.75 percentage point rate rise would act as further incentives.

CommSec chief economist Craig James said the jobs data highlighted why Australia did not need rates at “emergency” levels any more after dropping to a record-low 0.1 per cent during the pandemic. With other central banks “front-loading” rate rises to bring inflation under control, large increases should be expected from the RBA, he said.

“That focus on ‘front loading’ has increased the odds of the Reserve Bank lifting cash rates by 75 basis points on July 5,” he said.

“That will certainly give the RBA more confidence as they hike aggressively over the remainder of the year,” he said. “The next 12 months won’t be easy, but we enter this challenging period from a really strong position that will hopefully allow households and businesses to weather the storm.”