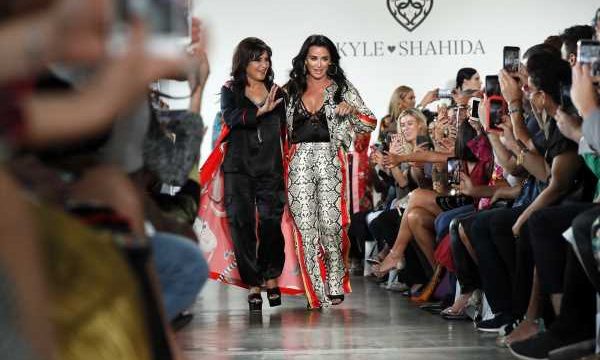 The Real New York Fashion Week Models of Beverly Hills have arrived. Some of the stars of The Real Housewives of Beverly Hills walked in Kyle Richards’ show at New York Fashion Week over the weekend, and it sure looked like a Bravo fan’s dream come true. Kyle + Shahida, Kyle’s new line with designer Shahida Clayton, was unveiled at NYFW on Sunday, Sept. 8, where stars Lisa Rinna, Erika Jayne, Teddi Mellencamp, Denise Richards, and Dorit Kemsley modeled the clothes. According to the New York Post, series newbies Garcelle Beauvais and Sutton Stracke were in the audience to show their costars their support. At the event, Kyle told Us Weekly that things have been "fantastic so far" with the latest additions to the cast. “Just starting to get to know them, but it’s new so, time will tell," she added.

If Season 10 doesn’t give us at least one episode that is all about the Beverly Hills Housewives walking in the Kyle + Shahida show, I will eat my The Agency hat. Fortunately for my digestive system, it looks like I will not have to try to figure out how to make a baseball cap palatable: The Kyle + Shahida debut will almost definitely be part of the upcoming season. As People reported, the Bravo cameras were at the runway show to film the RHOBH cast doing runway show things.

Season 10 is still a few months away, so there is only one thing to do until then. And that is let the Instagram posts from Sunday evening hold us over.

Dr. Christmas Jones is not messing around.

But when will we get the Kyle x Beverly Beach collaboration we crave? Hmm?

Extremely here for this look.

You want to see Rinna’s ponytail in action? Ask and you shall receive:

The Rinnatail is in it to win it.

Looks like we can count on the accountability coach to wear. That. Robe.

Here’s Kyle With Two Of Her Daughters Before The Show

The pair of collaborators basked in the well-deserved applause.

The Newest Additions To The ‘RHOBH’ Roster Went

On Aug. 29, Bravo announced Garcelle Beauvais and Sutton Stracke joined the reality show. Less than two weeks later, they did something Lisa Vanderpump would never do after Puppygate sent shockwaves through Beverly Hills. And that something was go to Kyle Richards’ fashion show.

Paris Hilton & Nicky Hilton Were There, Too

Kathy Hilton’s daughters were there to celebrate their aunt’s new line. There with bells and florals on.

Rinna’s model daughters went to the Kyle + Shahida show to cheer on their mom.

The Night Before The Show, The ‘RHOBH’ Painted The Town Rosé

Over the weekend, the RHOBH cast got together, and newcomer Garcelle graciously shared a photo from their night out in the Big Apple.

Man, this is going to be amazing. Looking forward to letting Season 10 stomp on me like a RHOBH star on a runway.