80 years later, The Wizard of Oz remains one of the most beloved movies of all time. It was also a huge cinematic achievement at the time; it wasn’t the first feature-length movie ever filmed in color, but it was certainly the first one to happen on such a large scale.

Behind the scenes, however, it was a different story. Garland — along with other cast and crew members — faced lots of personal problems throughout the production.

The Wizard of Oz would be nothing without Judy Garland’s iconic red-haired character Dorothy Gale.

In the past few decades, fans have witnessed the negative effects of childhood stardom on child stars. Beloved entertainers such as Britney Spears, Amanda Bynes, and Lindsay Lohan have gone through personal turmoil in the public eye, and have each worked hard to recover from how child stardom affected them.

Judy Garland was arguably the first one of these celebrities to experience the same phenomenon. Garland and her sisters were vaudeville entertainers from a young age — she was just 2 years old when she was first on stage — and she was eventually scouted by MGM Studios at just 13 years old.

Her age and her size proved to be a problem for the mega-movie studio, however. She stood at less than five feet tall, and her cutesy girl-next-door persona didn’t fit will with the more mature roles. According to the 1975 biography Judy, when Garland played younger characters (including Dorothy), she had to wear caps on her teeth and prosthetics on her nose.

Garland continued to develop body image issues as a result of how she was handled in the industry at such a young age.

According to the book The Golden Girls of MGM, studio chief Louis Meyer referred to her as his “little hunchback.” Charles Walters, who directed Garland in several movies later in her life, knew that her problems were a result of how she was treated. “She was the ugly duckling,” he said in the 1972 film Judy: Impressions of Garland. “I think it had a very damaging effect on her emotionally for a long time. I think it lasted forever, really.”

While The Wizard of Oz is Garland’s most beloved movie, that doesn’t mean it was a lovely experience for her filming it.  Throughout her early career, studio executives closely monitored her weight to make sure she kept her girlish figure. Sadly, Garland was already used to being manipulated with medication, as her mother gave her various pills starting at 10 years old. They were used to give her the energy she needed to perform and then to help her sleep.

Meyer continued allowing drugs to control Garland’s weight, TV Over Mind reported. On top of that, he forbade her from eating or drinking anything but chicken soup and black coffee. She was even forced to smoke up to 80 cigarettes a day to suppress her appetite. 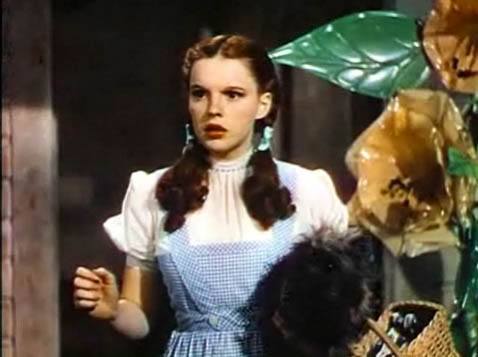 Judy Garland had a dangerous process of becoming Dorothy

In addition to being under a strict diet and pill regimen while filming The Wizard of Oz, Garland had to hurt herself physically for the role as well as medically. Biography.com reported on Garland’s not-so-magical experience filming the iconic movie.

To make sure she maintained a svelte figure and evoked what the “perfect” girl-next-door was supposed to look like, Garland was forced to wear tight corsets while filming and tape down her breasts. While Garland enjoyed a successful career after The Wizard of Oz, her personal demons eventually became her downfall. She died at just 47 years old, and her legacy lives on today through her daughter Liza Minelli.