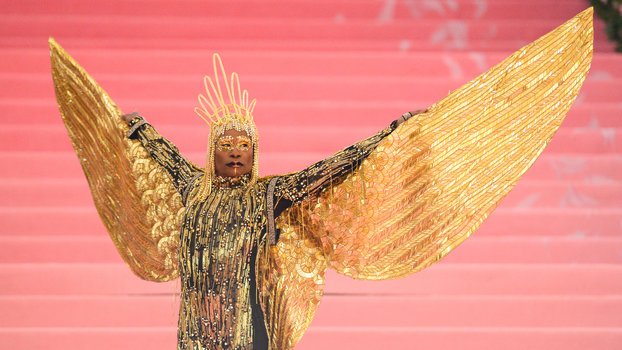 The theme of the 2019 Met Gala was “Camp” — an aesthetic that leans into that which would otherwise be deemed inappropriate or tacky. Camp is silly and also, per Susan Sontag’s defining essay on the topic, “dead serious.” And while many people will give you their less-than-expert opinion on what camp is (myself included), it’s really a “you know it when you see it” kind of thing. You also know it’s queer as hell.

This year’s Met Gala (from the theme to its attendees and — most importantly — their outfits) was so queer it threw the second brick at Stonewall. Because unlike its predecessors, this Met Gala made queerness a focal point as opposed to paying homage to queer designers, or simply having a few guests there to “queer up” otherwise not-so-queer themes (like Catholicism, for example). Camp is special because of its accessibility to almost everyone. It is a universal language, though some of us may be more fluent in it than others. For queer people, elements of camp are a part of our regular viewing, such as Lady Gaga wearing meat on a red carpet or showing in up cradled inside of an egg, but to create a space specifically for this kind of garishness is so fulfilling.

From its reliance on subverting the norm to its championing of the unusual as the usual, camp is queerness in motion. It can be a source of inspiration to the misfits we are, and a place where we draw our strength. Legendary queens of today and yesteryear have made the aesthetic not only inviting but also inspiring: Making this the Met Gala theme was making the Met Gala the queerest it’s ever been.

Queer culture is filled with camp masterminds like John Waters, Liberace, Elton John, Divine and Rupaul who represent the genre so well. This group of queer heavyweights have made long careers in the camp aesthetic. John Waters created camp masterpieces like Hairspray and Pink Flamingos which featured the drag camp excellence that is Divine (both a name and an adjective to describe her). Liberace and Elton John are bonafide show queens whose costumes and stage personas are world renowned for their campiness and flair. RuPaul, arguably the world’s most famous drag queen, has made over a three decade career wowing audiences with her signature blonde hair and Bob Mackie showstoppers.

RELATED: Sasha Velour On How Much It Costs To Be a Drag Queen

In queer media and entertainment, camp is king (or queen). Camp has been a way for queer people — a group of outsiders often mocked for our extravagance — to not run away from what makes us different, but instead to run toward it. Some might say we invented it. This year, not only did the theme represent a popular element of queerness, but so did the guest list. The LGBTQ community shined brightly from head to toe in this fashion extravaganza. With these icons as inspiration, the 2019 Met Gala truly challenged every last queen and subject to do the most.

Let’s take a gander at some of the highlights.

Tony Award-winning actor and gay icon Billy Porter stunned in gold from head to toe as he was carried down the carpet by a team of muscled men also clad in the color. The pink carpet was also lit ablaze by queer women who not only embodied the theme but represented for a group so often overlooked in the mainstreaming of subcultures and communities they so greatly influence (not to mention fashion in general). See: Cara Delevingne as a rainbow personified, courtesy of Dior Haute Couture, a look that took a cool 600 hours to make. Trans woman turned heads all night long. Orange is the New Black star Laverne Cox broke necks in Christian Siriano, while the stars of FX’s Pose, Indya Moore and MJ Rodriguez, served up looks with the gratuity already included.

Janelle Monae and Tessa Thompson did what they always do: deliver. Monae sported a many-hatted look that served a bit of AHH Real Monsters, complete with a winking boob. Thompson wowed in goth with a ponytail that was longer a CVS receipt and wrapped up like some kind of BDSM whip. Their looks represent some of the best of night. Lena Waithe used the carpet for a bit of a herstory lesson rocking a custom Pyer Moss tuxedo with the sentence “Black drag queens invented camp” on the back. And she’s right. Let’s be honest, black drag queens and queer people pretty much invented everything. From popular slang that has found its way to mainstream, to ballroom elements like voguing: If black drag queens and queers didn’t invent it, they likely perfected and elevated it. Credit is due either way.

Emmy Award-winning producer Ryan Murphy sported a Liberace tribute worthy of awe — and he bought a table so the stars of his show Pose could take their rightful seats at the event. Michael Urie served a full on Victor/Victoria fantasy that could not have suited him better.

Ezra Miller nailed the assignment, with a spectacular multi-eyed look. If this were a classroom, the teacher would share his work as an example for the rest of the class to follow. And the class would be like, Yes, he deserves extra-credit, and we will gladly do more homework to catch up.

Bisexual icon and Academy Award winning songtress Lady Gaga delivered four separate looks in a single red carpet. Starting with a dress that was grander than Central Station, the pop goddess unleashed a series of three reveals on the carpet that very much encapsulated what the event was all about. Instead of one Lady Gaga image to share we now have four. That is — I can’t stress this enough — GAY RIGHTS.

Adapting such an inherently queer theme such as camp gave the opportunity for many non-LGBTQ celebs to strut their stuff and tap into their campy side. Kacey Musgraves hit it out of the park in full Barbie fantasy that even Mattel would have to be in awe of. Harry Styles shined in sheer top with a look that says “Annette Bening would date me in a movie where she plays a lesbian.”

As for why this all makes 2019 the queerest Met Ball of them all? Last year’s Met Gala theme was “Heavenly Bodies: Fashion and the Catholic imagination.” Now it should be a surprise to no one that Catholicism hasn’t been historically kind to queerness or its people. And in some of the years before that, themes included “China Through The Looking Glass” and “Manus x Machina: Fashion in the age of technology,” neither of which are as overtly LGBTQ+ as Camp.

In short, this very flashy event has finally given the gays everything they want and deserve. Even if some of the attendees fell short. (Rami Malek and Taron Egarton just came off of playing two of the most camp queers alive — Freddie Mercury and Elton John, respectively — and still hit the function looking like Maitre’ds at Catch.) But no matter: Camp is in the eye of the beholder, and at this year’s Met Gala, we beheld a very queer sight indeed.