Pauline Menczer is just back from the morning shift driving a school bus north of Byron Bay. “I really love it,” she says cheerfully. “It’s really nice to be a good influence on the kids.”

It is a modest life for a forgotten Australian sporting champion. Much quieter than her two decades as a livewire freckle-faced surfer on the women’s professional tour. 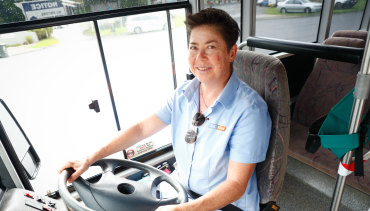 “I really love it”: Pauline Menczer at the wheel of the school bus she drives for a living. Credit:Danielle Smith

Menczer, who grew up as one of the few girls surfing at Bondi Beach, won the world championship in 1993. It was a year when there was no prizemoney, just a trophy she later realised was broken.

Now a new documentary on the trailblazing women who broke into the male-dominated surfing world in the 1980s and ’90s is drawing attention to Menczer, whose underdog-to-sporting triumph rivals Michelle Payne’s Melbourne Cup win and Steven Bradbury’s speed skating gold medal.

Director Chris Nelius’ Girls Can’t Surf, which opens in cinemas in March, relates how tough it was for every woman on the early tour but Menczer, now 50, had an especially hard route to a world title.

Inspired by her story, Nelius is lobbying Waverley Council to have a statue of Menczer at her home beach. “She’s the only world surfing champion from Bondi,” he says. “She deserves to be recognised.” 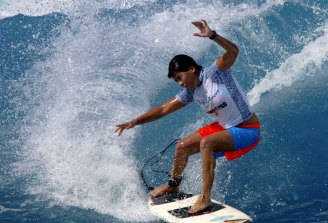 Pauline Menczer surfs on the way to winning The Turtle Bay Resort Women’s Pro in Hawaii in 2002. Credit:Pierre Tostee / tostee.com

In the US, two surfing fans who have seen the film, Mimi LaMontagne and Sophie Marshall, have started a Gofundme campaign to raise the $25,000 in prizemoney that Menczer should have received to donate to her.

“Pauline is one of the reasons female surfing is where it is today,” LaMontagne says. “She was super, super talented and she was one of the first women to really stand up and just be who she was.”

Growing up with a single mother of four after her taxi-driver father was murdered, Menczer was sometimes abused by male surfers in the Bondi break. “It was definitely hard knocks but I think it really made me a survivor,” she says.

When she joined the tour as a teenager, Menczer was so far from the industry’s then ideal of the blonde surfie chick that she was never able to attract sponsors. So she did whatever she could to stay competing — holding raffles and car boot sales, buying jeans in the US to sell in France at a profit and, like other women, sometimes sleeping in her board bag in the contest tent or under a grandstand.

“I was the wheeling and dealing queen,” she says. “I still am. My mum brought us up learning to survive on nothing. When there was a street clean-up in Sydney, she get one lot [of the kids] on one side of the street and the other lot on the other and we’d just grab whatever we thought we could sell at a garage sale.” 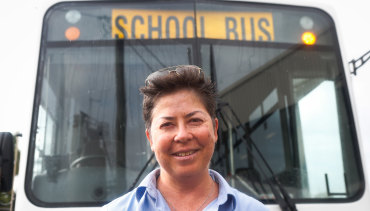 “I really love it”: Pauline Menczer after the school bus run. Credit:Danielle Snith

When Menczer was broke, it brought out her best in the surf. “I’d end up winning a contest,” she says. “I seem to do really well under pressure.”

A spirited character who once won a contest with a blue mohawk, Menczer struggled throughout her career with crippling rheumatoid arthritis. In the weeks leading up to the climax of her title season, she could barely walk.

When she wanted to shop, she remembers being pushed around in a supermarket trolley. Unable to surf, she would hook her leg-rope around a pole and paddle in a pool.

On the day of the climactic contest, “I can’t believe I even surfed”, she says. “When I was walking down to the water’s edge, I was freaking out thinking ‘I’m going to get smashed out there’.”

But when the hooter went, Menczer somehow forgot about her knotted hands and aching legs. “I surfed like there was nothing wrong with me,” she says. “That determination to win and the adrenaline managed to subside the pain for a while.”

She won, was announced as world champion … then hobbled back up the beach.

Menczer also had a secret throughout her career. The woman she told everyone was her coach, who travelled the circuit with her, was really her French girlfriend Nadege.

“I was in the closet for most of my career,” Menczer says. Having heard the homophobic slurs about Jodie Cooper, who had been outed on the tour, she thought “God, if that’s the way they speak about her, it’s better to be quiet”. 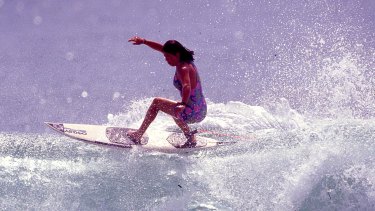 In the past two years, Menczer has developed a rare autoimmune disease that causes painful blisters and burns on her skin. Wary about dirty water after all the rain on the northern rivers and COVID-19, she has only been able to surf half-a-dozen times in the past year.

Waverley Mayor Paula Masselos is considering the statue proposal. “In principle it’s a great idea but trying to find where and how and the money for it could be a bit of a challenge and it might take some time,” she says. Initially, she has proposed Menczer be honoured in a new digital gallery in the renovated Bondi Pavilion.

The newfound attention and the prospect of that belated prizemoney, given her medical expenses, is appreciated. “To be finally recognised is really awesome,” Menczer says.

Girls Can’t Surf opens in cinemas on March 11. The GoFundMe campaign is here.