Foreign aid has never been something Coalition governments like talking about. Every internal poll shows the majority of Australians don’t want more of their money spent on developing countries.

Charity starts at home, pollsters are told, and the COVID-19 crisis has hardened these attitudes. In 2018, government polling showed 80 per cent of Australians did not want an increase in spending on foreign aid. The government won’t release its latest research, but sources say focus groups conducted over the past year show these views haven’t changed. 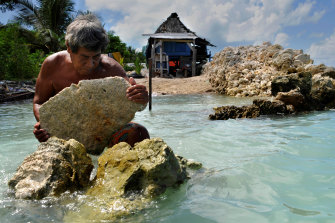 Australia’s foreign aid budget has been refocused on the Pacific in recent years.Credit:Justin McManus

But the Morrison government has done something notable during the global pandemic: it has increased spending on foreign aid for the first time since the Coalition came to power in 2013. With China pouring billions of dollars into large-scale infrastructure projects throughout the Pacific over the past decade, and the pandemic placing unprecedented economic strain on the region, Australia realises it needs to act.

It is just having a difficult time admitting it.

Despite the $1.1 billion over four years in new funding announced in 2020, the Department of Foreign Affairs and Trade is maintaining foreign aid will remain unchanged at $4 billion. In response to a recent question on notice from a parliamentary committee, DFAT said the funding would remain at that level across the forward estimates, or the next four years.

According to analysis by Australian National University economist Stephen Howes, Australia’s aid expenditure will in fact be $4.4 billion in 2020-21 – an increase of 9 per cent on last financial year. Professor Howes says DFAT’s insistence that spending on foreign aid will remain unchanged makes “no sense”.

“Forward estimates are meant to reflect the costs of government policy decisions, and the government indicated on budget day itself that it would be spending more than $4 billion next year,” he says. “It is disappointing to see DFAT provide such an obfuscatory answer.”

The Sydney Morning Herald and The Age asked DFAT and Foreign Minister Marise Payne why it wasn’t recording the increase in its official figures. The department took 11 days to concede there was a “series of temporary and targeted initiatives” supplementary to the aid budget.

While the government is a long way off the $5.5 billion Labor was spending on foreign aid prior to 2013, the strides last year have been welcomed by aid groups. Micah Australia executive director Tim Costello said it was “good news for our closest neighbours whose economies and livelihoods are reeling from the pandemic.”

But there is significant concern the increase in spending comes as DFAT has quietly shut down its key oversight body that scrutinised the aid program, the Office of Development Effectiveness.

The lack of publicity about the modest increase in the foreign aid budget is reflective of Australia’s uneasiness about promoting its soft power abroad in recent years. The federal government spends 10 times more on defence than it does on foreign aid, compared to a defence-to-aid spending ratio of five-to-one in 2013-14.

Australia’s total diplomatic and development spending sits at about 1.3 per cent of the federal budget, well behind comparable countries such as Canada (1.9 per cent) and the Netherlands (4.3 per cent). The new aid spending over the coming years will include an additional $211 million in COVID-related aid, $500 million in support of vaccine access and $485 million for south-east Asia.

This doesn’t take into account the other kinds of support Australia is offering the Pacific, such as concessional loans and grants for infrastructure projects aimed at directly taking on China’s decade-long lending spree in the region.

Australia is not spending more on foreign aid purely out of the goodness of its heart, but out of a hard-headed realisation of its strategic merits amid the growing influence of China across the region.

As the Coalition cut aid from 2013, Beijing went on an infrastructure blitz throughout the Pacific. After Australia took money from elsewhere in the aid budget to pay for its Pacific “step-up” over the past three years, it realised regions such as south-east Asia could not be neglected either.

There is no consensus within the government on how to talk about the increase in foreign aid spending. Some officials within DFAT believe a failure to trumpet the increase in spending robs the country of its soft power win. There is also concern it will result in bad budgeting and oversight of the aid dollars being spent.

Australia’s aid program is still recovering from the significant loss of experience sparked by the 2013 merger between DFAT and AusAID. The justification for the merger was Australia needed to align the aid budget with the government’s diplomatic policies – in other words, the aid program needed to be more strategically targeted. Perversely, the opposite happened. Insiders say the merger has resulted in a department that is less strategically minded than ever before, with former AusAID officials assuming senior positions in the diplomatic corps.

Within the government, some want to start talking about foreign aid and diplomacy in the same kind of language that is used to justify increases in spending on defence and security agencies. Foreign aid, it could be argued, is another arm of Australia’s national security apparatus.

Liberal senator Concetta Fierravanti-Wells, who was minister for international development between 2016 and 2018, says she advocated for a greater share of foreign aid to be spent on the region, especially in the Pacific, on the basis that it enhanced the nation’s security.

“As Minister, I frequently stated that the stability, security and prosperity of our region was second only to the defence of Australia,” she says.

“I also pushed – and was successful – for the Pacific to be one of the five priorities in our foreign policy white paper. Much of the Pacific step-up which I initiated was to affect economic prosperity and in turn, stability and security of our region.”

But many in the government argue it would be politically dangerous to talk about spending more on developing countries as Australia recovers from the economic damage of the coronavirus.

Some say it is easier to talk about foreign aid for the Pacific, but Australians don’t like to hear about support for anywhere further afield such as south-east Asia.

They also say they don’t want to open themselves up to the attack in a few years that they have cut the foreign aid budget after the temporary COVID-related measures expire.

Tamas Wells, a research fellow at the University of Melbourne, is looking into the attitudes of federal MPs about the aid program.

After interviewing more than 20 MPs across the political spectrum, Dr Wells says there is a concern about the “nothing to see here” approach from the government.

“On the one hand, there is a growing consensus that we need to be active in the region,” he says.

“But the other hand, it was really clear to me was that there is a real concern about the narrative. How do you talk about increasing aid at a time when people are suffering because of COVID lockdowns and losing their jobs?

“The way through that dilemma for the government has been to sneak in some increases and find a way to do it in a low-key way. But it has done so at the same time it has stripped back the oversight bodies, and that’s really worrying.”

The politics of foreign aid has changed since the Coalition came to power and slashed the overseas development assistance budget. Last month, the Business Council of Australia – which backed the Abbott government’s cuts eight years ago – called for an urgent boost to the nation’s diplomatic and foreign aid footprint across the Indo-Pacific region to keep up with China’s growing influence.

Allan Gyngell, a former senior diplomat and intelligence chief, says spending on foreign aid should be talked about in the context of “shaping outcomes”.

“Aid like the sort we’ve been giving is a visible sign of an Australian desire to engage with the region,” says Gyngell, national president of the Australian Institute of International Affairs.

“Whenever you have polled Australians, they don’t like foreign aid very much. But the same is true of foreign investment.

“The point is that no government simply goes along with the immediate uninformed responses to generalised questions like that, and I think that we ought to be able to construct a story which not only plays well overseas but which is accepted more by Australians, but I’m not under any illusion that this is going to be the most popular measure a government can announce.”

Labor’s foreign affairs spokeswoman Penny Wong says the Morrison government doesn’t want its political base noticing the increase in spending, but it also doesn’t want security analysts to criticise it for cutting aid when the temporary assistance ends.

“The result is a political fix that doesn’t deliver the return on investment that is in Australia’s interests,” she says.

“This temporary step is a drop in the ocean compared to the resources Australia needs to support our region’s pandemic recovery and stability – while other countries are already stepping up to fill the void.”

It shouldn’t come as a surprise Prime Minister Scott Morrison’s government has begun increasing the foreign aid budget. In his maiden speech in 2008, Morrison called for an increase in foreign aid, saying “it is the Australian thing to do”.

Since then, not much has been said.

At the end of each day, we’ll send you the most important breaking news headlines, evening entertainment ideas and a long read to enjoy.  Sign up to The Sydney Morning Herald’s newsletter here, The Age’s here, Brisbane Times’ here, and WAtoday’s here.