It may have been savaged by critics and commentators alike, but the first “volume” of Harry & Meghan has become the most-watched documentary title in a single week on Netflix.

The streaming service claims the first three episodes of the six-part series, which were released on December 8, have smashed previous viewing records. 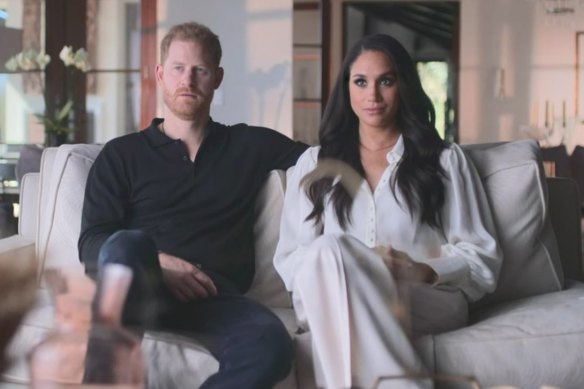 Harry & Meghan’s six-part documentary is being released in two parts.Credit:Netflix

“Volume I of the unprecedented and in-depth documentary series Harry & Meghan debuted with 81.55 million hours viewed, the highest view hours of any documentary title in a premiere week,” the streamer said.

“The series from Oscar-nominated director Liz Garbus appeared in the Top 10 TV list in 85 countries, including number one in the United Kingdom. After just four days, over 28 million households have seen the first three episodes.”

That figure was arrived at by dividing the viewing hours (81.55 million) by the total run-time (2.9 hours). There is, of course, no guarantee that everyone who started watching the first episode was still hanging in there by the end of episode three – nor that they will return when the second tranche of episodes drops on Thursday night.

Having paid the Duke and Duchess of Sussex between $US100 million and $US150 million ($146-219 million) for what Deadline described as “a multi-year deal … for scripted series, docuseries, documentaries, features and children’s programming”, Netflix is understandably keen to sell the idea that the show has been an “unprecedented” success.

The fact the streaming giant cancelled the Duchess’ children’s series, Pearl, in May as it looked to cut costs after shedding subscribers for the first time in its history has only added to the pressure to prove that signing the couple was a wise move.

But while those viewing numbers are indeed impressive, the series may ultimately prove to have less appeal than some of Netflix’s other documentary hits.

The streamer has only published its Top 10 lists since June 2021, making direct comparison extremely difficult. Those figures also capture only viewing within the first 28 days on platform, and documentary series often have a slow build and a long tail.

Netflix has enjoyed major success in the long-form documentary space with shows such as The Staircase, Making a Murderer (across two seasons), Fyre, The Social Dilemma and Tiger King. But none of them were released in the era of Netflix’s Top 10 lists, so our knowledge of how they performed is either anecdotal or at the behest of the company.

Harry & Meghan is likely to have a much shorter tail on the platform too, with intense pre-launch interest generating immediate demand. That sort of clamour rarely attends regular documentary series, which tend to pull viewers because of reviews and word of mouth.