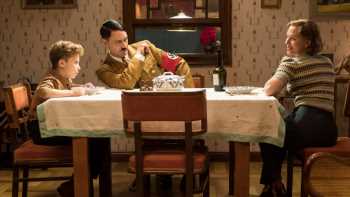 The honor positions the film for a potential Oscar run and bolsters its awards chances. That’s good news for Fox Searchlight, which must have been disappointed by the lackluster critical reception for the movie, a dark comedy set in the waning days of the Nazi Empire. Reviewers faulted the picture for delivering satire without the necessary sting and the general consensus was that “Jojo Rabbit” may have stumbled out of the gate.

That no longer appears to be the case. Toronto’s top prize has had uncanny predictive powers when it comes to Oscar winners. Last year’s winner, “Green Book,” went on to capture the Academy Award for Best Picture. Previous victors include “La La Land,” “Room,” “Three Billboards Outside Ebbing, Missouri,” and “The Imitation Game,” all of which went on to score with Oscar voters and other awards bodies. That track record has helped position the festival as a key stop for awards season hopefuls.

The first runner-up for the People’s Choice award was Noah Baumbach’s “Marriage Story” and the second runner-up was Bong Joon-ho’s “Parasite,” both of which were more warmly received by critics. Netflix is backing “Marriage Story,” a bruising portrait of a disintegrating relationship that has been likened to “Kramer vs. Kramer.” Neon is releasing “Parasite,” a twisty thriller that provides a blistering commentary on income inequality.

Awards sages believe that “Marriage Story” could score a Best Picture Oscar nod along with nominations for Baumbach’s direction and screenplay, as well as for the performances of Adam Driver, Scarlett Johansson, and Laura Dern. “Parasite” seems destined to be a Best International Feature Film prize and could even elbow into the Best Picture and Best Director categories.

This year’s festival included several splashy premieres. “Hustlers,” “Joker,” and “Just Mercy” were among the big studio releases that raised their profiles by screening in Canada.