Check her out! Sophie Wessex looks elegant in a pink gingham coat and matching hat for carriage ride alongside Prince Edward at Trooping The Colour

Sophie Wessex was pretty in pink today as she made her appearance alongside other senior royals in London as the celebrations for the Queen’s Platinum Jubilee kicked off this morning.

Doning a gingham dress and a matching hat, the Countess looked delighted to be marking the monarch’s milestone and she rode in a carriage alongside Prince Edward.

The 57-year-old royal is married to the monarch’s youngest son Edward, 58, with whom she shares children Lady Louise Windsor, 18, and James, Viscount Severn, 14.

She is one of the members of the Firm taking part in this morning’s Queen’s Birthday Parade, the first official Platinum Jubilee event of the bank holiday weekend.

Sophie was spotted riding in a carriage with her husband and children, waving at the crowds as they travelled from Buckingham Palace along The Mall to the parade ground.

Sophie Wessex, 57, was snapped riding in a carriage alongside husband Edward, and their children Lady Louise Windsor and James, Viscount Severn 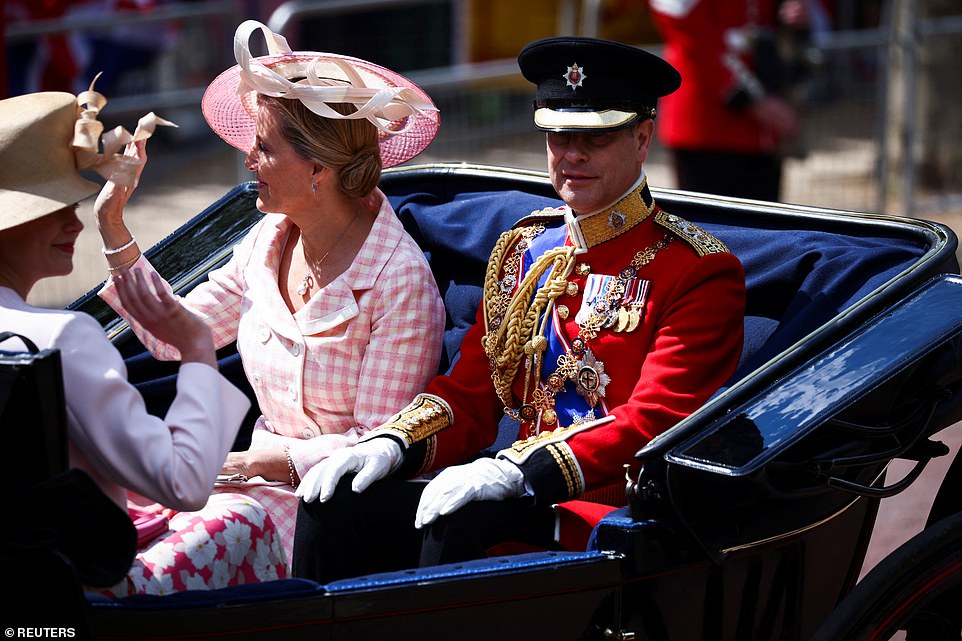 The royal was seen waving to the crowds as she rode in a carriage during the Trooping the Colour parade this morning, accompanied by her family 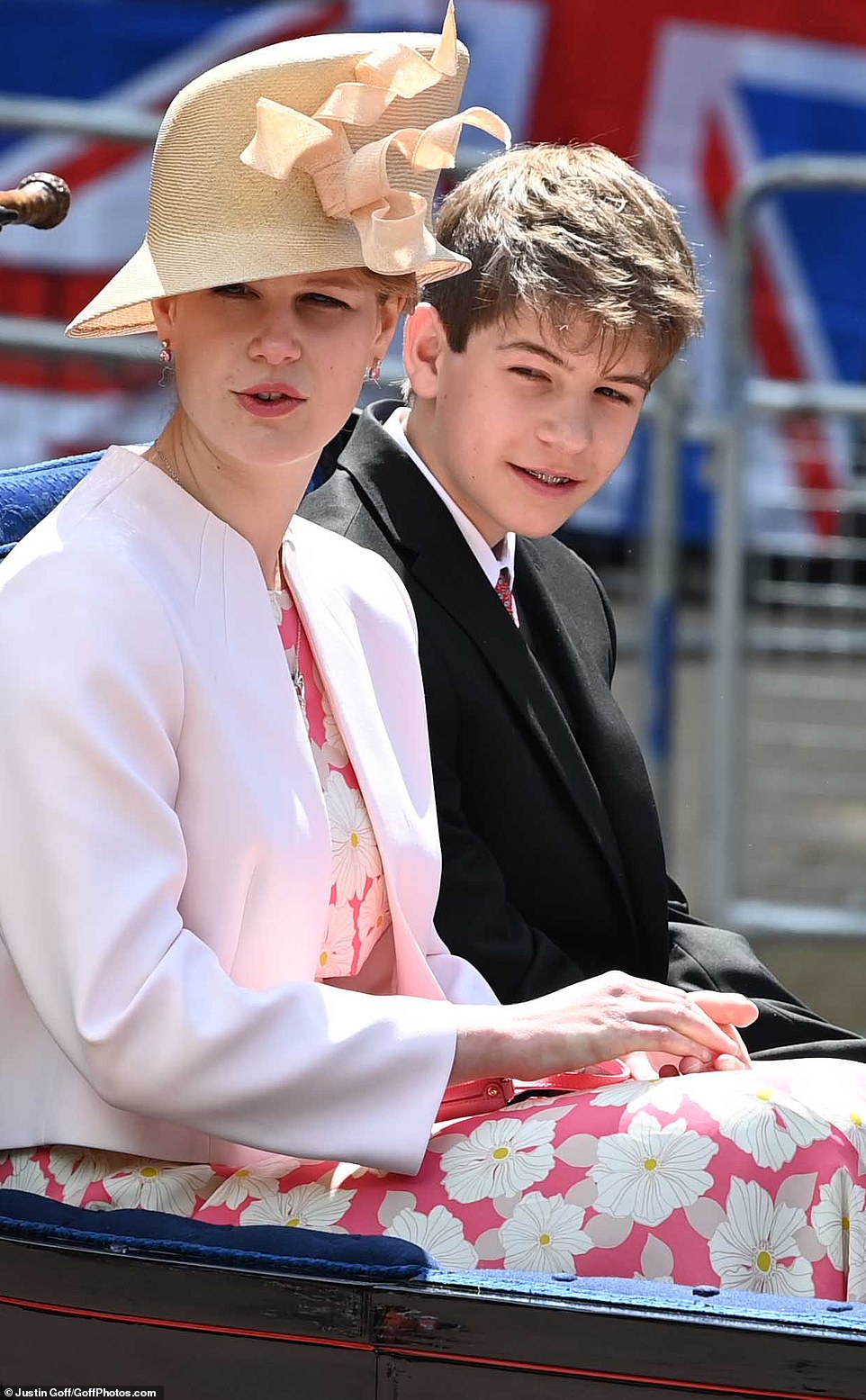 The couple’s children, Lady Louise Windsor and James, Viscount Severn, were photographed alongside their parents, with Lady Louise also donning pink, while her brother opted for a smart black suit 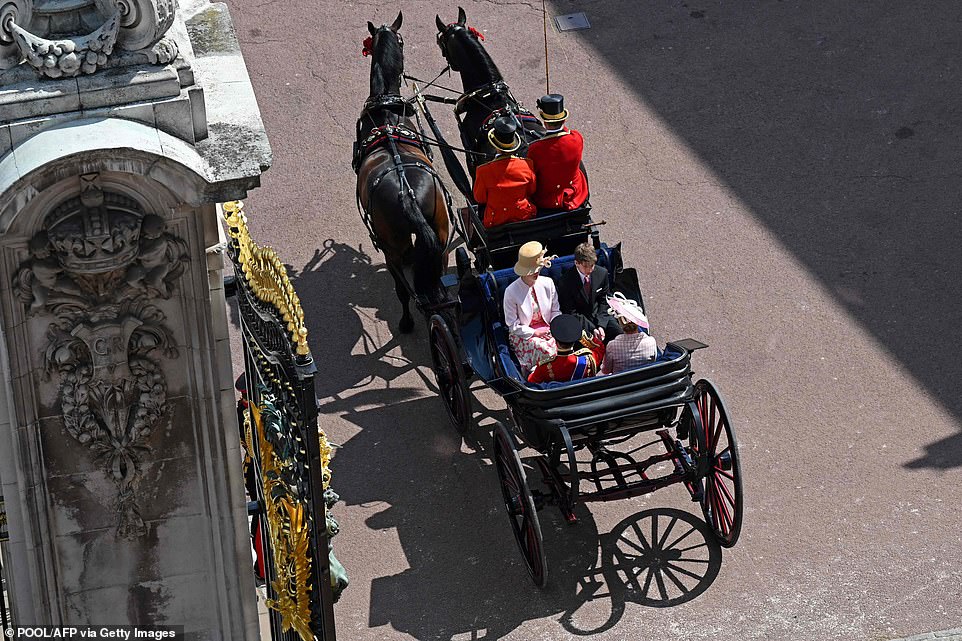 An aerial shot of the Wessex family, showing Sophie, Edward, and their two children Lady Louise and James, Viscount Severn, as they travel in a horse-drawn carriage during the Queen’s Birthday Parade

Other senior royals spotted riding in carriages included Kate Middleton, 40, and the Duchess of Cornwall, 74. Meanwhile, the Prince of Wales, the Duke of Cambridge and the Princess Royal all travelled on horseback.

Their journey preceded the Trooping the Colour, which marked the monarch’s official birthday, as has been tradition for the last 260 years.

This year the colour was trooped by the 1st Batallion, Irish Guards, with up to 1,450 officers and soldiers from the Household Division, together with 400 Army musicians and around 240 horses.

While the full extent Queen’s involvement in the celebrations is yet unknown, due to her recent mobility issues, we are expected to see the monarch three times during today’s events.

Her Majesty is expected to appear on  the Buckingham Palace balcony at 12.20pm during Trooping the Colour.

Next, she is set to share the balcony with working royals for the RAF flypast at 1pm.

For her third appearance today, Her Majesty will reportedly attend the lighting of the principal beacon – a 21-metre Tree of Trees sculpture at the Palace. 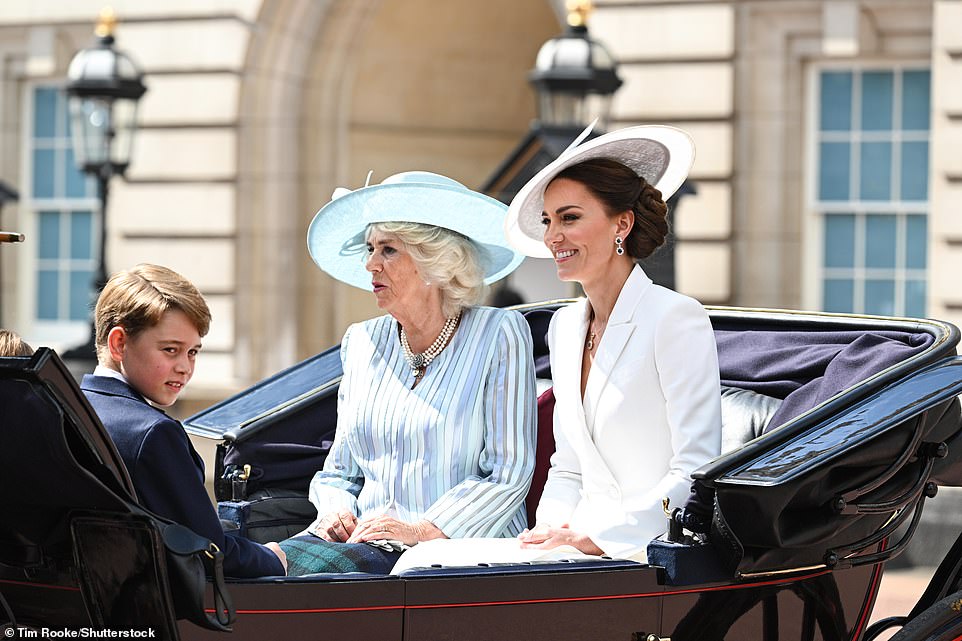 Kate Middleton, 40, and the Duchess of Cornwall, 74, also took carriage rides during the event, alongside the three Cambridge children 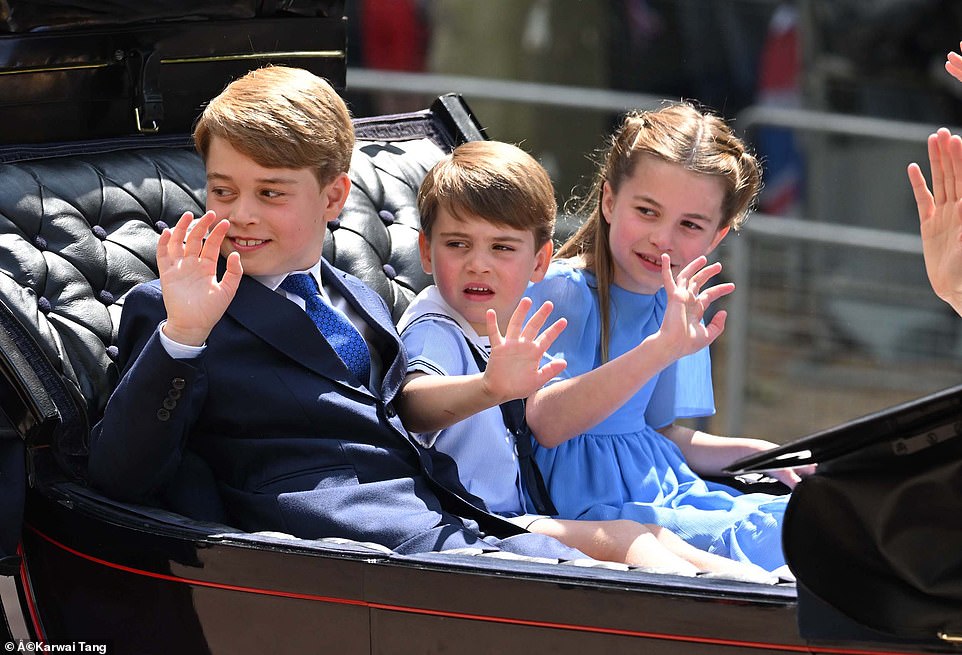 Prince George, eight, Prince Louis, four, and Princess Charlotte, seven, waved at crowds while they took part in the carriage procession at Trooping the Colour 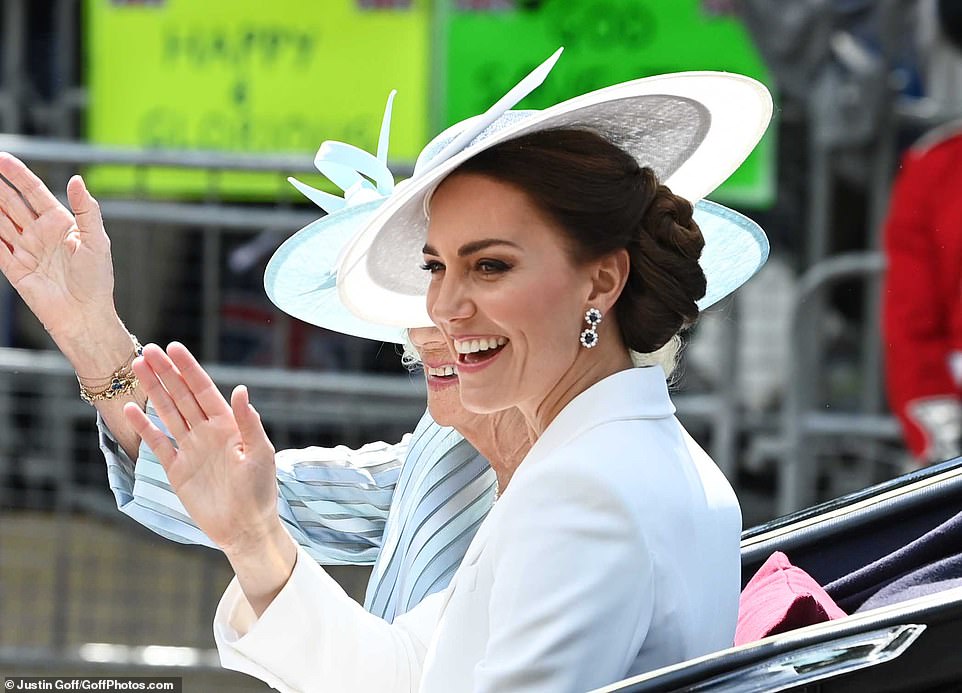 The Queen is the first British monarch in history to celebrate her Platinum Jubilee.

Millions across the country are gearing up to take to the streets for parties and national commemorations held in in her honour during the special extended bank holiday weekend.

The Queen, who at the age of 96 has mobility problems, returned to her Windsor Castle home with her dogs on Tuesday after a pre-Jubilee a break at Balmoral as she paces herself ahead of the four days of festivities.

Her flight back to London was forced to abort a landing when her 13-seater plane was caught in lightning storm.

The commemorations kick-start with the traditional Trooping the Colour military spectacle on Thursday, involving more than 1,500 officers and soldiers and 350 horses from the Household Division.

But the Queen’s attendance is only likely to be confirmed this morning, with royal fans hoping to see her appear on the balcony with her family for a special flypast, and possibly even review the troops.

In the evening, more than 3,000 beacons will be set ablaze across the UK and the Commonwealth in tribute to the Queen, with the principal Tree of Trees beacon illuminated outside the Palace.

There will be no ceremonial journey to the service of thanksgiving at St Paul’s Cathedral for the Queen on Friday June 3, and the monarch, if she attends, will use a different entrance rather than scaling the steep steps. 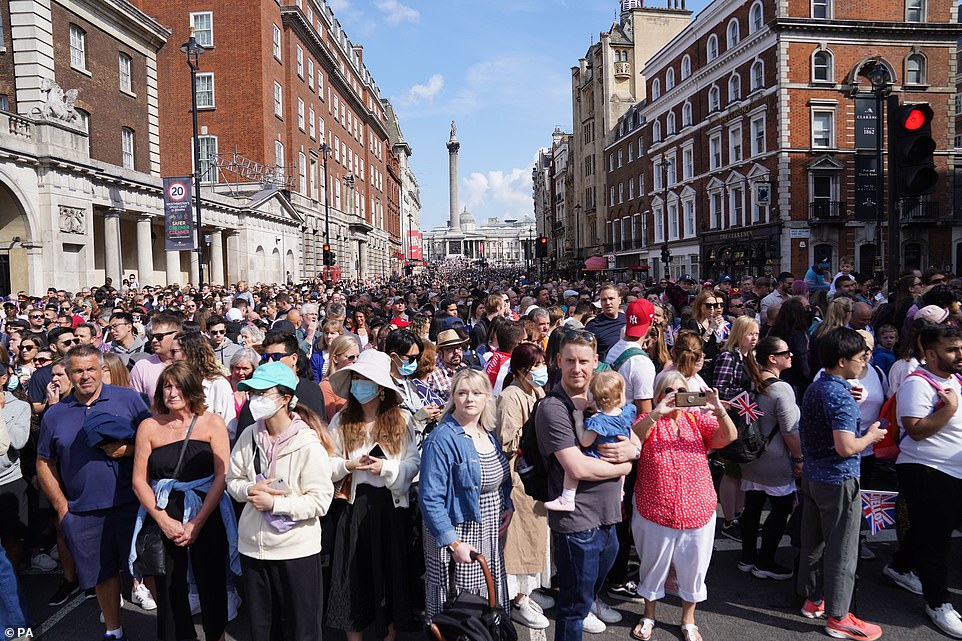 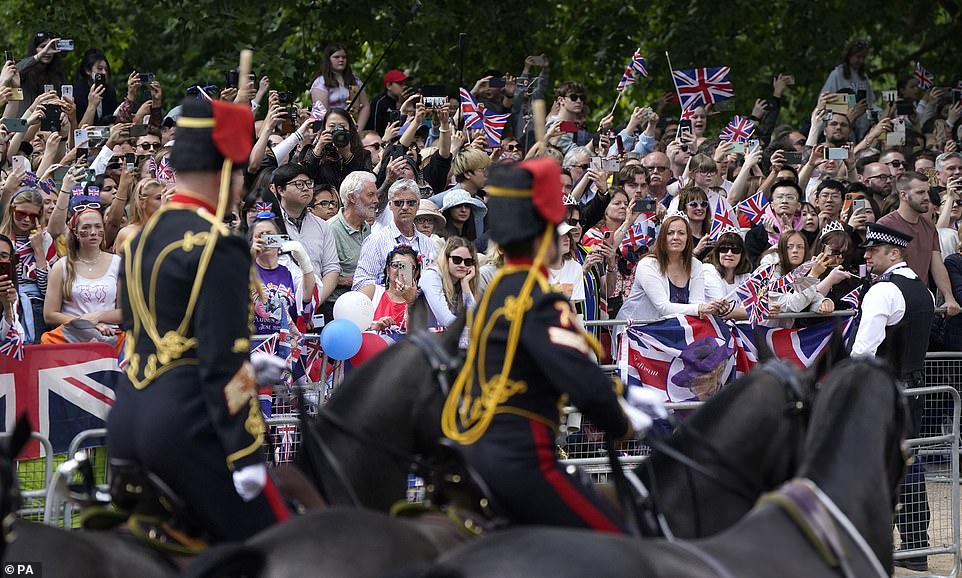 And the Queen’s planned visit to Epsom for the Derby on Saturday is off, with members of the royal family attending on her behalf.

Saturday is also the first birthday of the Duke and Duchess of Sussex’s daughter Lilibet, amid speculation the Queen will get to meet her namesake for the first time and possibly attend her christening when Harry and Meghan fly back for the Jubilee.

In the evening, the BBC’s Party at the Palace – set on three stages in front of Buckingham Palace – will entertain a live crowd of 22,000 people and a television audience of millions.

Charles and William are preparing to deliver public tributes at the concert to the Queen, who is due to be watching on television from Windsor.

On Sunday, millions will gather for patriotic street parties, picnics and barbecues, with more than 85,000 Big Jubilee Lunches being held across the UK.

The finale is the Jubilee Pageant through the streets of London, with a cast of 6,000 performers and close to 200 celebrities joining the carnival procession.

It is hoped the monarch will make a final appearance on the Buckingham Palace balcony to round off the weekend to see Ed Sheeran singing the national anthem with a choir made up of Britain’s ‘national treasures’.