It’s the first week on the new job and the former prime minister hasn’t rocked up to work.

Yep, in case you missed it, Scott Morrison decided to skip this week’s sitting of parliament, the first since the election, to go to the pub with a few old mates. Only a slight exaggeration on my part. It’s a conference in Tokyo to meet up with former conservative world leaders, aka has-beens. His excuse is that he’d already accepted the invitation to attend before the government finalised the sitting dates for the year. He says he’s advised his two successors: Prime Minister Anthony Albanese and Liberal Party leader Peter Dutton. 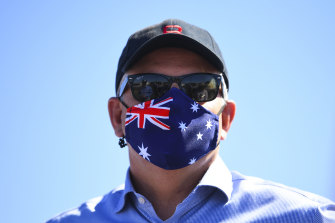 This is so on-brand. The man who couldn’t hold a hose can’t hold his post, post-election. So what should a boss do? The voters of Cook ought to issue Morrison with a first and final warning. Assistant secretary of the ACTU Liam O’Brien tells me that’s the appropriate response when a worker doesn’t show up to work without a reasonable excuse. He didn’t follow our lawful and reasonable instructions to attend the parliament and some might argue his attendance at the conference was not a reasonable excuse to miss a sitting day.

Let’s remind Morrison and others how much they loved the concept of mutual obligation while they were in power, those “tasks and activities you agreed to while getting certain payments from us”.

I feel desperately sorry for those anti-Morrison voters of Cook who are now casting around for a new member to stand up for the leafy seat in their hours of need. Mind you, Cookers had a choice of doing a Bennelong and dumping a PM but Morrison won easily, says independent election analyst Kevin Bonham. 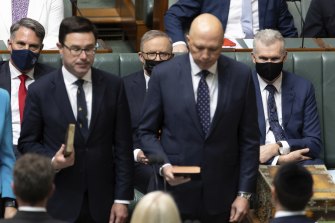 Liberal leader Peter Dutton (right) and Nationals Party leader David Littleproud in the House of Representatives on the first day of the new parliament.Credit:Alex Ellinghausen

Maybe his absence on day one is wounded pride, wanting to avoid what he sees as the abject humiliation of being a backbencher in a place where he once led – and his sermonising and overseas visits are just a way to firm up his employment options post-politics. Those of you who have followed Morrison’s career, including his turbulent stint at Tourism Australia, will know he already has his eye on the main game.

Morrison may have missed the beginning of parliament, but his preoccupations sounded loud and clear – the pomp and circumstance, religion and monarchy. This is a man who adores ritual – but perhaps he’s had enough now. Australians certainly have. If we could get rid of gods and foreign heads of state, parliament could have got straight to business. There is, as we know, no time to waste.

Still, I loved watching member after member get called up, in their first-day best. Smart jackets. Well-ironed shorts, a tiny bit too much coughing for my liking (please let this not be a superspreader event).

There is a somewhat job-lot mentality on the first day of parliament. Groups of members are called up to make either oaths or affirmations. Let me give you the shorthand version – it’s about promising to put the Queen first and doing it under God’s eye. And you can do that by swearing on the holy book, whichever one you pick, or just by gently affirming (no god required). 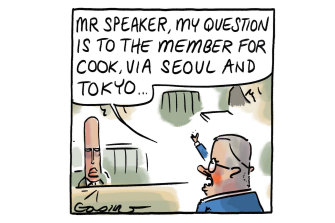 I am completely puzzled why we should continue to have either. Let’s rewrite these verses to put the people of Australia first. Ditch the Queen, at least in parliament but also in general. Ditch gods, at least as part of state operations. Fine to have them in places of religion, the only place they belong. (I tried to see who was oath-ing or affirming as they were sworn in on Tuesday, but the camera sight lines did me no favours. Certainly, the holy book users sounded louder, but maybe that’s just a hangover from the last parliament, where it was the fashion to be godly.)

You’d imagine that, in 2022, there would be a rush of politicians affirming enthusiastically, in a mirror image of the people they represent. The last census shows a distinct uptick in Australians identifying as having no religion and a real slump in Christianity. The last time those saints in the parliamentary library published anything on oaths versing affirmations, the affs were rising hell for leather (in the Reps, 25 per cent in 2010; Senate, 39 per cent. In 1901, just about the entire parliament believed in gods).

And while we are hard at modernising parliament, can anyone explain why we are still opening parliament with prayers? Let’s save time and ditch the folderols and have the kind of workplace rules the rest of us observe (good luck, Stephanie Foster and all who sail with her).

Even if he did agree to go on this trip while he was still PM, I doubt if anyone besides Morrison has a job where the day starts with a prayer and a bob, but you can go off and further your own self-interests on the national dime.

Make everyone feel as if they are part of the team and can rely on everyone else. That includes getting everyone to show up to every day of work, where they are paid at least $200,000 to represent the people who voted for them. I doubt very much the citizens of Cook will get much value out of a bunch of failed conservative prime ministers.