It has been a very long journey for Nades and Priya Murugappan. Originally from Sri Lanka, they came separately by boat in 2012 and 2013. Both claimed asylum on the basis of their links to the Liberation Tigers of Tamil Elam, which had fought a long and bloody war against the Sri Lankan government.

Their claims took so long to wind their way through the courts and tribunals that Priya and Nades met, married, and were allowed to settle in the town of Biloela, Queensland, where they had two children, Kopika and Tharunicaa. 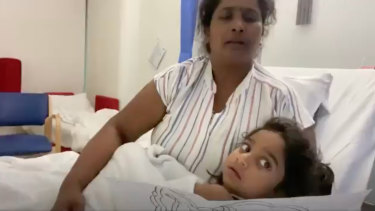 Priya Murugappan with her daughter Tharunicaa in Perth Children’s Hospital.

Their freedom came to an end in 2018 after all their appeals for asylum were rejected and they were forcibly detained in Melbourne. The following year, the Coalition government put them on a plane back to Sri Lanka but was thwarted mid-flight by an injunction in court. After landing in Darwin, the family was sent to Christmas Island to be detained.

Since their detention as illegal arrivals, the plight of the Sri Lankan couple and their Australian-born daughters has been a cause celebre. Not only do the usual advocates who oppose the Coalition’s tough border policies want them to be allowed to stay, but so do former Sydney radio shock jock Alan Jones and the former National Party leader Barnaby Joyce.

All pleas for a reprieve have been stymied. Then, as the case once again started grabbing headlines after the younger of the two girls was flown to Perth and diagnosed with septicemia and pneumonia, the government appeared to reconsider.

Foreign Affairs Minister Marise Payne said on Tuesday the government was thinking about possible resettlement in either New Zealand or the United States. Two days later, Home Affairs Minister Karen Andrews suddenly ruled out either option, with the backing of Prime Minister Scott Morrison, saying these places were only for refugees.

While it appears the Coalition has, once again, locked itself into sending the family back to Sri Lanka, the government is clearly feeling the political heat. According to The Age’s chief political correspondent, David Crowe, Liberal MPs are privately seeking a solution that lets the family return to the Australian mainland after almost two years of detention on Christmas Island. Coalition backbenchers were not breaking ranks publicly, he wrote, but were urging ministers privately to fix the problem as soon as possible.

It has also been reported that briefs are before the Immigration Minister, Alex Hawke, to consider whether to lift the bar preventing three-year-old Tharnicaa from making a visa application, and another case to have the family released back into community detention.

There was a time, even a few years ago, when any exception to Australia’s harsh border policies might have signalled a green light to people smugglers. The measures were unpopular in some parts of the community but there is an argument that they saved lives by deterring people coming here on dangerous sea voyages.

But that point has long since been proven. The boats have been stopped. A small exception for this one case would not undermine the message and restart the boat voyages. The government has proved its credentials on this issue. It’s time for the whole family to be returned immediately to the Australian mainland where they can receive adequate care.

After that, Mr Hawke should use his legal discretion to allow them to stay permanently. A small act of compassion, would save millions of dollars wasted on detaining this family. Their long journey must come to an end. And it should end with a new beginning, most likely in Biloela, the town of fewer than 7000 people in central Queensland whose community would welcome them back with open arms.