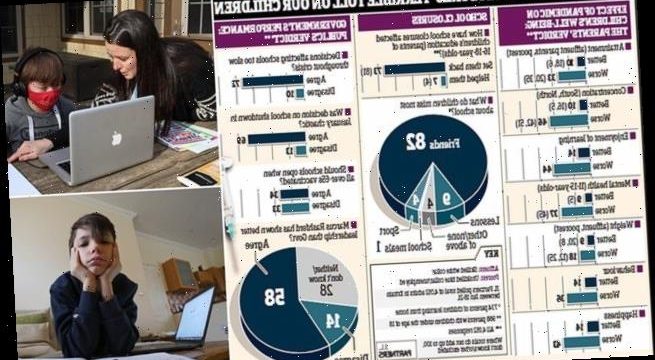 SIMON WALTERS: Proof that the poorest are bearing the brunt of this crisis

The devastating way that pupils’ attainment levels and ability to study have plummeted because of school closures is laid bare today.

One in three parents say that their children’s sense of educational fulfilment has been damaged, with the poorest being worst affected.

Approximately half say their ability to concentrate has suffered in lockdown while more than four in ten say their joy of learning has dimmed.

These are among the latest worrying findings of a JL Partners poll for the Daily Mail.

The survey also underlines how parents believe the pandemic has taken a terrible toll on the general mental and physical wellbeing of their children.

Nearly four out of ten say their offspring’s mental health has deteriorated: They have put on weight, are lonely, less happy and worse behaved. The findings will add to growing pressure on Boris Johnson from Tory MPs to set a target date for the re-opening of schools to all children. 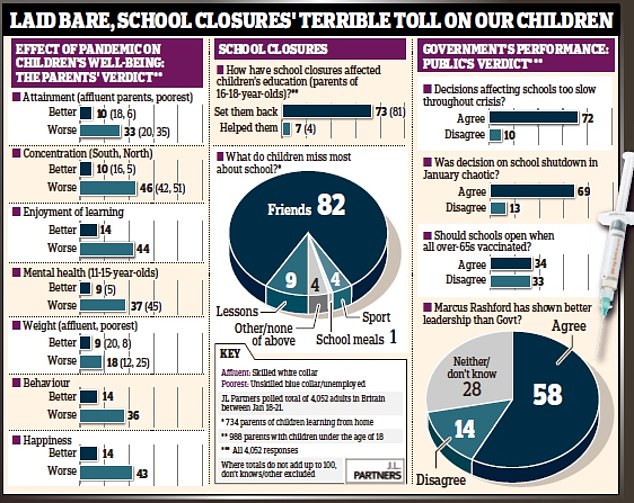 Seven in ten voters say the Government’s handling of school closures in January was ‘chaotic’ and a significant number want them to re-open when all over-65s have had a vaccine.

Yesterday the Mail reported how the survey had disclosed that one in three families does not have enough computers or laptops for their youngsters.

It also indicated that parents say the pandemic may have wrecked their children’s chances of getting a good education and job.

Today we can disclose how the poll reveals parents’ wider fears of the way Covid curbs, especially school lockdowns, have fundamentally affected their basic ability to learn.

One third (33 per cent) say that the attainment level of their children has declined, while 10 per cent say it has improved.

There is a sharp divide between rich and poor: The attainment level of children from affluent families has been barely dented by the pandemic, the figures show. 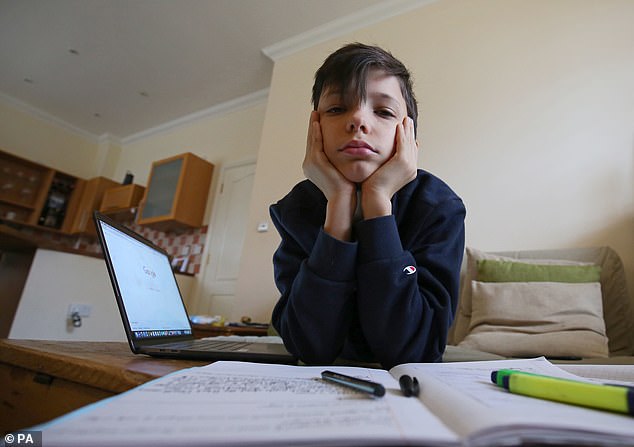 One in three parents say that their children’s sense of educational fulfilment has been damaged, with the poorest being worst affected

But 35 per cent of the poorest parents say their children’s attainment level has dropped and only 6 per cent say it has improved. The North-South divide is manifested in the effect on children’s reduced ability to concentrate.

In the South of England, 42 per cent of parents say their children’s concentration level has dropped, 16 per cent say it has improved.

Among parents in the less prosperous North, 51 per cent believe their children’s concentration has got worse, 5 per cent say it has improved.

Parents of children hit by disruption to GCSEs and A-levels are most worried about the effect of closures on their education. 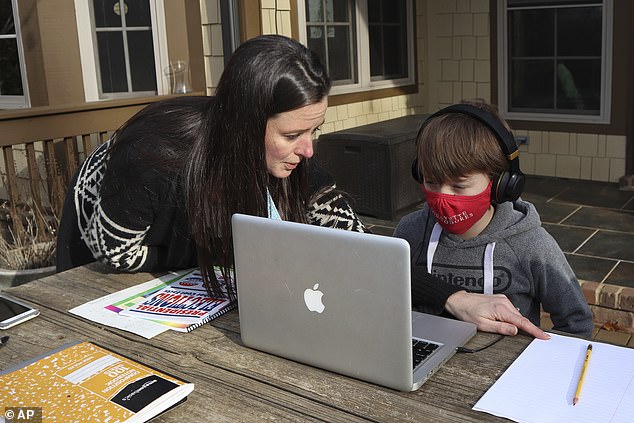 More than four in five (81 per cent) of parents of pupils aged 16 to 18 say their education has been set back by this, 4 per cent say it has been helped.

Forty-four per cent of parents say their children’s joy of learning has been diminished and 14 per cent say it has been enhanced.

One in four parents (25 per cent) from the poorest families say their children have piled on the pounds since last March; 8 per cent have lost weight.

In stark contrast, among affluent families, one in five (20 per cent) of children have become slimmer; 12 per cent have got fatter.

The poll suggests the slump in children’s interest in education and overall contentment is linked to school closures making them feel lonely.

Asked what their children most miss about not being at school, 82 per cent of parents of those studying at home say it is not seeing their friends.

A total of 34 per cent of all adults say schools should re-open as soon as all over-65s are vaccinated; 33 per cent say they should stay shut when this target is reached. Asked if the Government’s handling of schools in recent weeks – when the Prime Minister reversed a pledge to keep them open in 36 hours – was ‘chaotic’, 69 per cent of all voters agreed.

An even larger proportion of the public, 72 per cent, say decisions affecting pupils were too slow from the start of the pandemic.

Nearly six out of ten voters (58 per cent) say footballer Marcus Rashford, who has campaigned for more help for poor children, has shown more leadership.