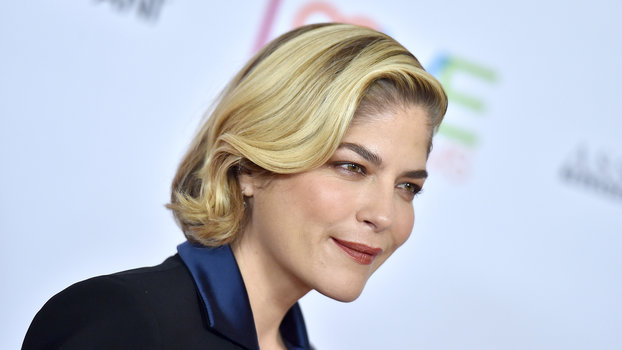 Since earlier this year, Selma Blair has been honest about her journey battling multiple sclerosis, sharing her symptoms and treatments with her followers on Instagram and opening up about the mental toll of the illness.

On Sunday, the actress posted a photo of herself on Instagram wearing just a Thom Browne tweed jacket and holding a crab-shaped purse. She also had her hand on her head, which she recently shaved after completing a round of treatment for MS.

Portrait of a lady. @thombrowneny in #calfornia. Shot by @creativerehabnyc #subversive universe #barbie

The photo garnered plenty of support from fans and celebrity friends (like Michelle Pfeiffer, who commented that she was "perfection"), but some people left negative comments, which Blair responded to with her trademark sense of humor.

"Wear your pants," someone wrote — to which Blair replied, " I don’t have any. Can you believe it! Minimalism

." After someone commented that she was starting to "loose [sic] her mind," she responded, "todah rabah. My mind is just fine," using the Hebrew words for "thank you."

When someone asked about the point of the picture other than "shock factor," she said, "I think it’s a vulnerable, humorous, odd and interesting fashion shot. I like it."

She also liked it in Barbie form, sharing Sunday evening a post by LoopLoft that showed a doll in the same pose, and bare-bottomed outfit.

Thank you @looploft for making my day. (Clutching my pearls) #baldbarbie #fashionweek in the valley.

Blair, who was diagnosed with MS last year, has been undergoing various treatments and recently opened up about self-love in the process. "Even though I may seem like I have gone farther away, I am learning and getting healthier,” she wrote in an Instagram post in July. “Even as I get seemingly sicker. I will jump this horse around again.”