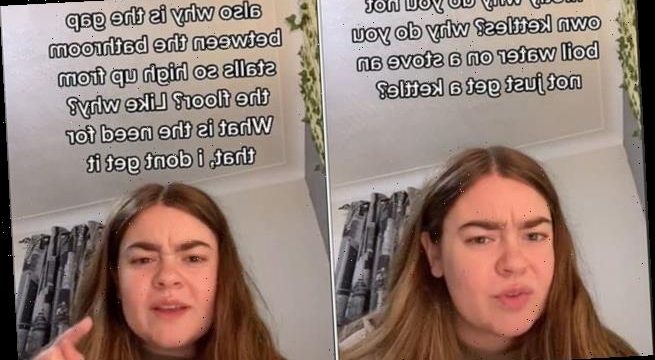 ‘Why do you not own kettles?’ Scottish woman who worked in the US complains about customs she found most confusing, from not including tax in prices to calling petrol ‘gas’

A Scottish woman who spent four months living in the US is sharing her questions and complains about what Americans do differently.

In a viral TikTok video that has been viewed 3.9 million times, Kirsty Clyne quizzes Americans about why they say ‘gas’ instead of ‘petrol,’ why they don’t use kettles, and why they’re so proud of their Scottish heritage.

Her video has been met with impassioned responses, some from other Brits who are equally confused, and others from Americans explaining why things are done differently across the pond. 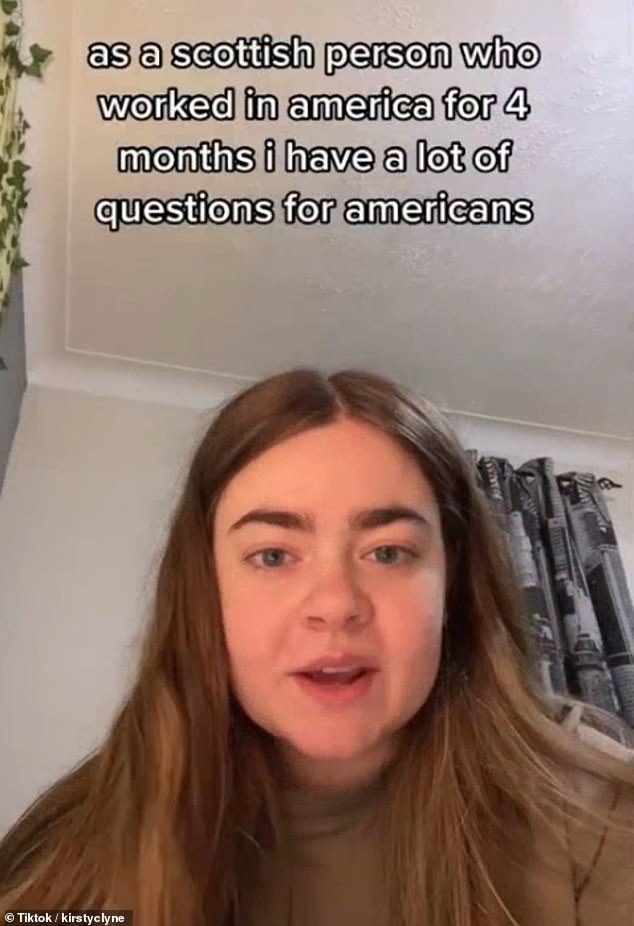 Viral: Kirsty Clyne, from Scotland, spent four months living in America. She has shared a TikTok video in which she asks questions about things she doesn’t understand about the US 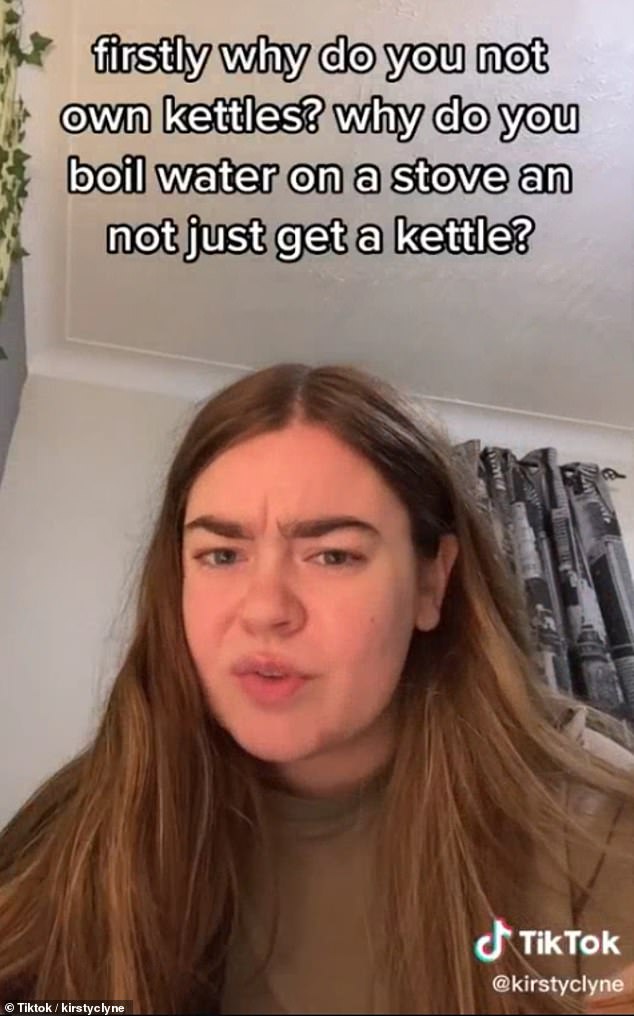 Boiling! She doesn’t understand why Americans don’t own kettles. Tea is much less popular in the US than it is in the UK, and Americans most frequently drink it iced

‘As a Scottish person who worked in America for four months, I have a lot of questions for Americans,’ she asks at the beginning of the video, having not appeared to have actually asked any Americans these questions during the four months she worked in the US.

‘Firstly, why do you not own kettles? Why do you boil water on the stove and not just get a kettle?’ she asks disdainfully, wrinkling her brow.

Hot tea is hardly as popular in the US as it is in the Scotland or the rest of the UK. According to Quartz, Brits drink 4.281 pounds of tea per person annually, compared to just. 503 pounds per person in the US — meaning Brits drink over eight times as much tea as Americans.

And according to the Washington Post, 80 per cent of tea consumed in the US is iced tea.

Coffee is a much more popular beverage — so most US homes have coffee makers, while kettles are rendered an unnecessary appliance.

Next, Kristy asked: ‘Why do you call petrol diesel for your car “gas” when it’s a liquid, not a gas?’

Gas is short for gasoline, another word for petrol. The term gasoline, or gas, is more widely used in the US.

Kristy went on: ‘Why do people look at me as if I’ve grown three heads when they asked what the time was, and I said half past two? Like, how do you not understand that?’

This experience was likely an isolated one, or perhaps due to regional differences. Saying ‘half past’ the hour or ‘a quarter to’ the hour is not uncommon in the US.

‘This one winds me up,’ Kristy continued. ‘Why is it when you tell an American you’re Scottish, they’re like, “Oh my god, I’m a ninth Scottish on my grandad’s side.” What?’

As commenters have explained to her, US history doesn’t go back nearly as far as many other countries, and many Americans are made up of a lot of immigrant backgrounds. Many are interested in their heritage, and if they’re telling Kristy about their Scottish heritage, they are likely just trying to relate to her. 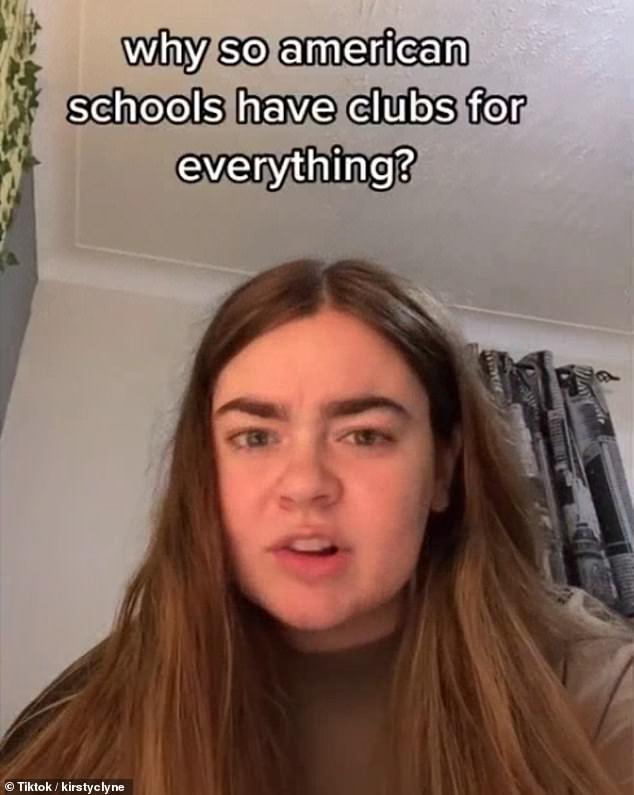 Joining in: The abundance of high school clubs had Kristy scratching her head 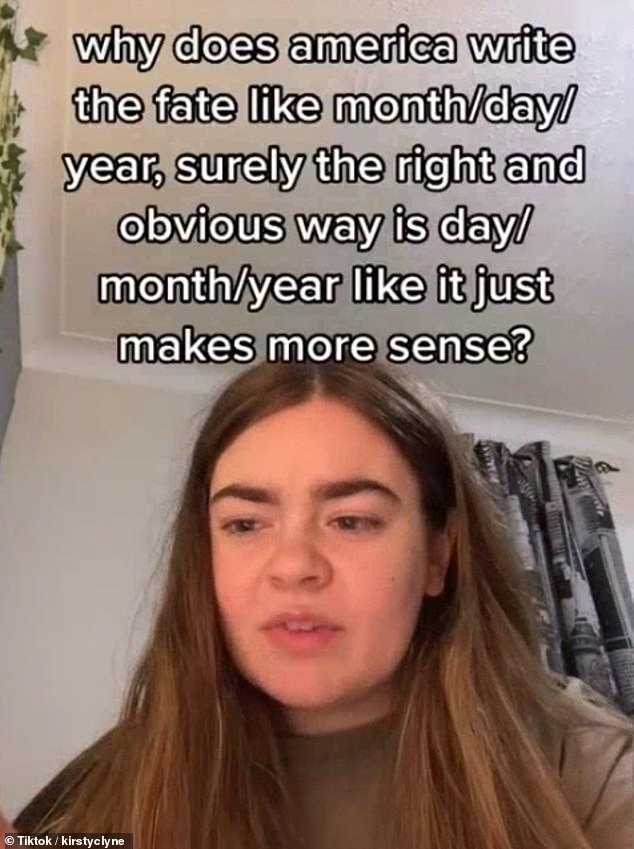 ‘Why does America write the date, like, month/day/year? Surely, the right way and the obvious way is day/month year. It just makes more sense,’ Kristy insisted

‘Why do American schools have clubs for everything?’ she asked.

This one appears to merely be a cultural difference in how socialization is promoted among adolescents.

Acceptance to top colleges and universities in the US can also be quite competitive, and commitment to extracurricular activities is often considered a plus for an application.

‘Why does America write the date, like, month/day/year? Surely, the right way and the obvious way is day/month year. It just makes more sense,’ Kristy insisted.

While American commenters on the video disagree that one way is necessarily ‘right’ or more ‘obvious,’ the exact reason why people in the US list month before day is a bit cloudy.

In fact, several people have tried to get to the bottom of this mystery, without much success.

Next, Kristy asked: ‘Why do your price tags not include tax? Why do you then have to add tax on at the counter? Like, why is not the tax included in the price?’ 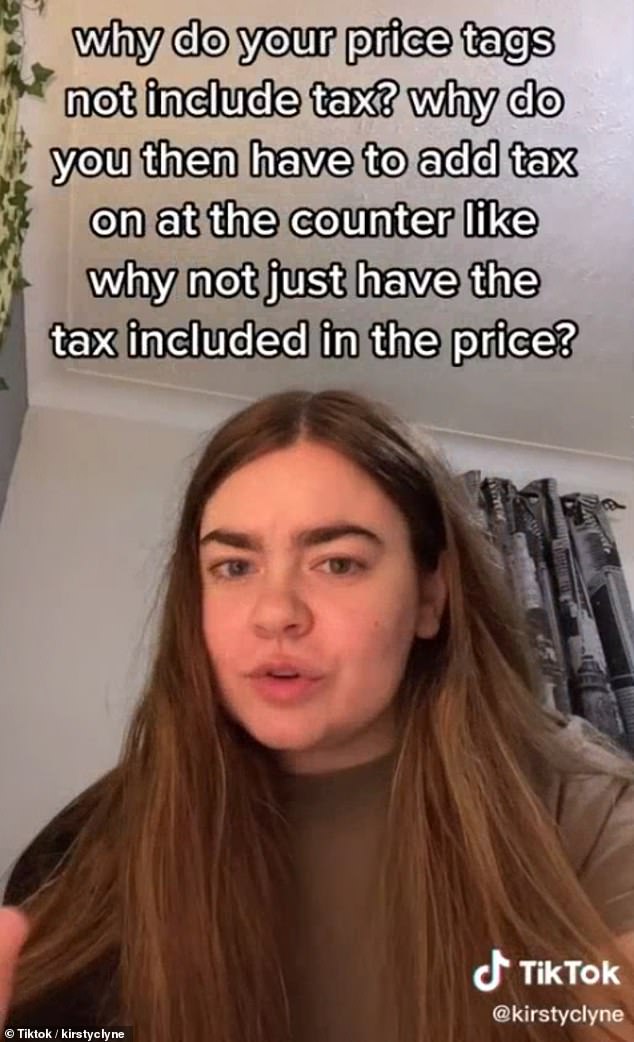 Up to the states: Sales tax left her baffled, but since the 50 states all have their own sales tax, posting prices that include tax becomes tricky 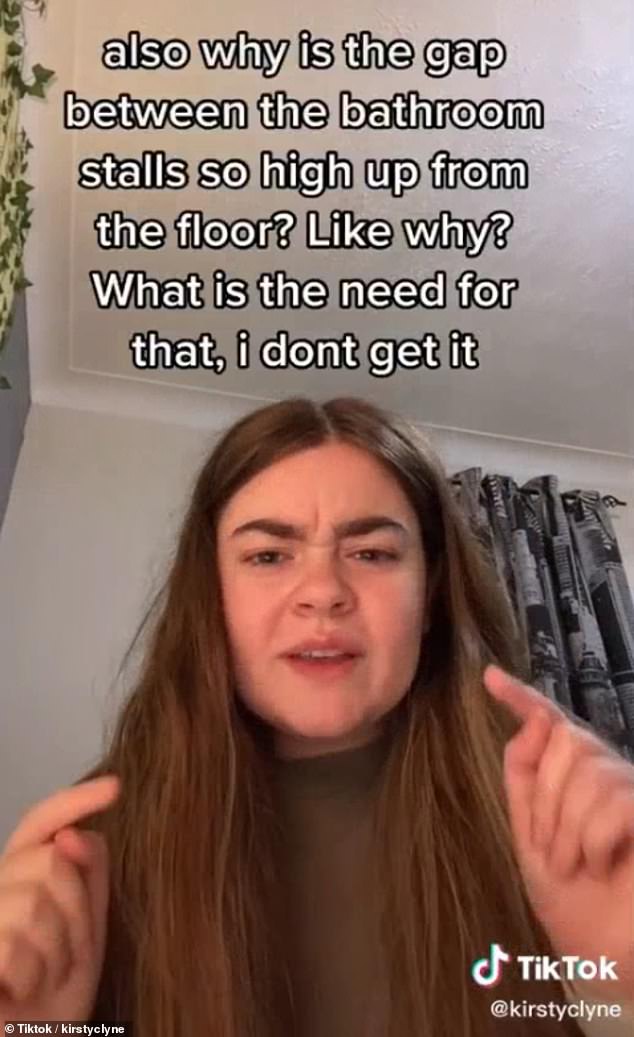 ‘Also why is the gap [underneath] the bathroom stall so high up from the floor? Like, why? What is the need for that? I don’t get it,’ she said

Sales tax is different in each US state. For businesses with multiple locations across the country, that can mean that the same $10 T-shirt ends up costing $10.18 in one state (Alaska) but $10.95 in another (Tennessee) — hence, it wouldn’t be practical to print different price tags for items in different states.

Businesses with locations in one state, then, also don’t post post-tax prices, since that might lead to confusion.

‘Also why is the gap [underneath] the bathroom stall so high up from the floor? Like, why? What is the need for that? I don’t get it,’ she said.

While completely-enclosed bathroom stalls certainly offer more privacy — and might be considered preferable by many Americans — there are several reasons why there is often a large gap at the bottom of a stall.

Most importantly, to comply with the Americans with Disabilities Act, in a stall less than 60 inches deep, the front partition and at least one side partition must have toe clearance of at least 9 inches above the floor.