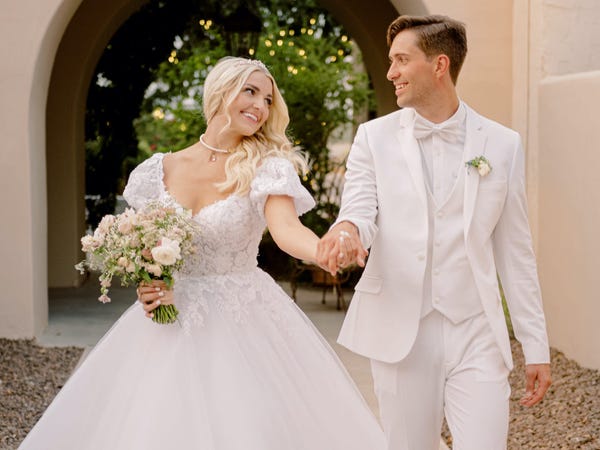 Rydel Lynch and Capron Funk got married on Saturday. 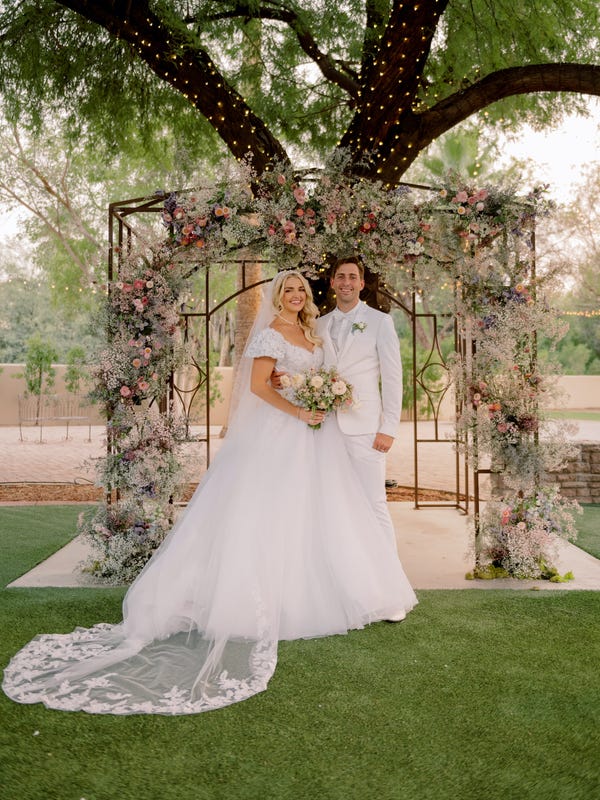 Lynch is an influencer and member of the band R5, the Lynch-family band. Funk, on the other hand, is a YouTuber and professional scooter rider.

The couple have been dating since 2019, and they got engaged in February of 2020, as they announced on their YouTube channel.

The couple actually eloped in late August, but they celebrated with their family and friends on Saturday at Secret Garden Events in Phoenix, Arizona. 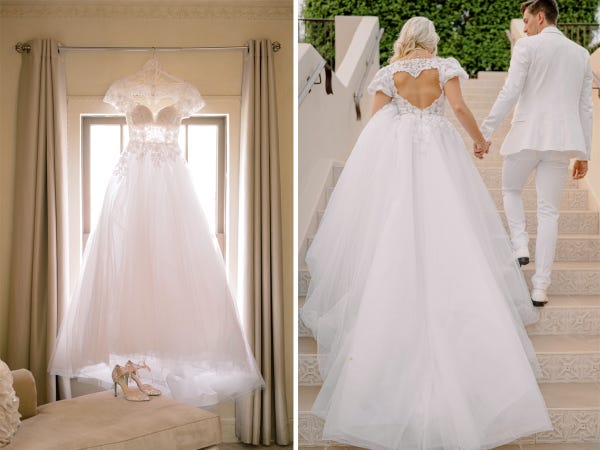 A heart-shaped cutout added some fun to the gown as well.

The delicate lace bodice and cap sleeves have a retro feel. 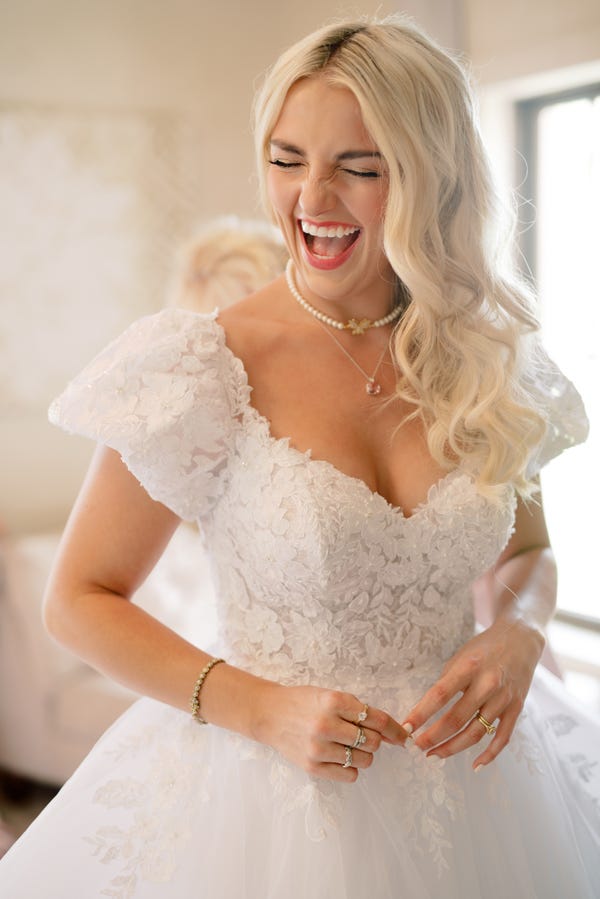 Lynch's dress puts a new-age twist on popular bridal styles from the 1980s by combining the retro sleeves and more modern lace.

The full skirt brings a classic element to the look, and Lynch accessorized the outfit with modern rings and two necklaces.

"I felt like a princess," Lynch said of how she felt in her wedding dress. 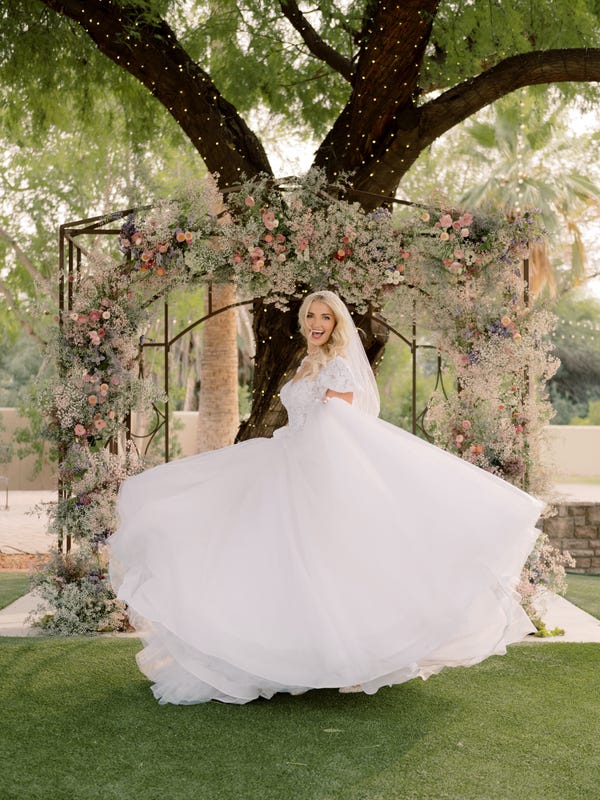 "Once I put my wedding dress on, it was just a crazy moment," Lynch said. "Mom got to put me in it, and then she put my veil on."

Lynch wore a glamorous, long veil to the ceremony.

"I've been waiting to be in a wedding dress for my entire life pretty much," Lynch added. "So it was definitely something special."

Alp & Isle photographed the event, while Pierce Tews of 22 Visual filmed it.

Lynch's brothers were all groomsmen at the wedding. 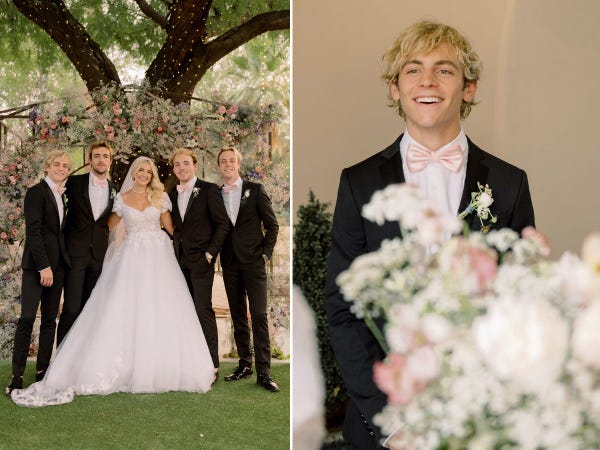 The Lynch siblings are Rydel, Ross, Rocky, Riker, and Ryland. All of the siblings were in the band R5 together, with Ryland serving as the DJ and manager of the band.

The band isn't making music together anymore, but the five of them are still close. Rocky and Ross Lynch have since formed an alternative group called The Driver Era.

Rydel Lynch recently started her own trendy boutique called RYDEL, showing off her eye for fashion.

Despite their musical careers, Ross is best known for his stint as a Disney star, as well as his more recent work as Jeffrey Dahmer in "My Friend Dahmer" and as Harvey Kinkle in "The Chilling Adventures of Sabrina."

The family's suits came from ASOS.

The couple got married outside under a floral archway. 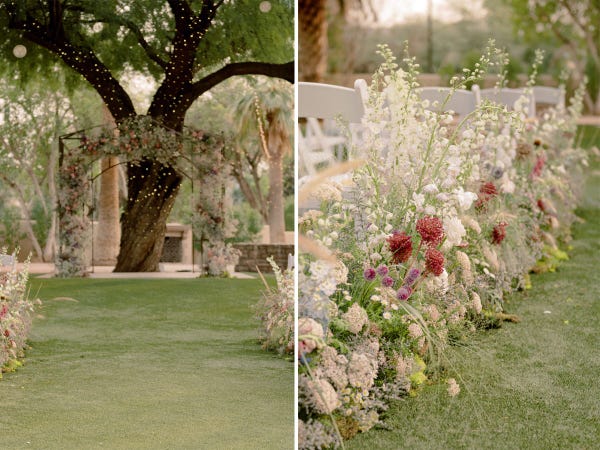 The same flowers decorating the archway were placed on the chairs set up for guests, creating a cohesive look. The Wildflower provided the flowers for the event.

Slater Events, which is owned by Amanda Slater, planned and designed the wedding, while The Event Co. provided decorations. Slater told Insider that the wedding was planned in just two and a half months.

"I worked directly with Rydel throughout the planning process," Slater told Insider. "She was super easy to work with. It was so fun."

"She just made it so enjoyable, and it's been amazing to get to know her family and really bring in all of those touch points throughout the wedding because her family and the people closest to her are what's most important," she added.

Lynch walked down a staircase to make her grand entrance at the wedding. 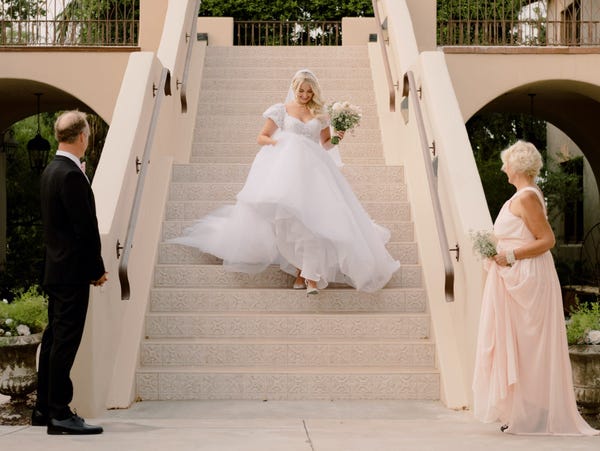 Lynch's gown fit the dramatic moment, as the white, tulle skirt stood out against the neutral staircase.

Both her mother and father walked her down the aisle.

Funk promised to make Lynch laugh in his vows. 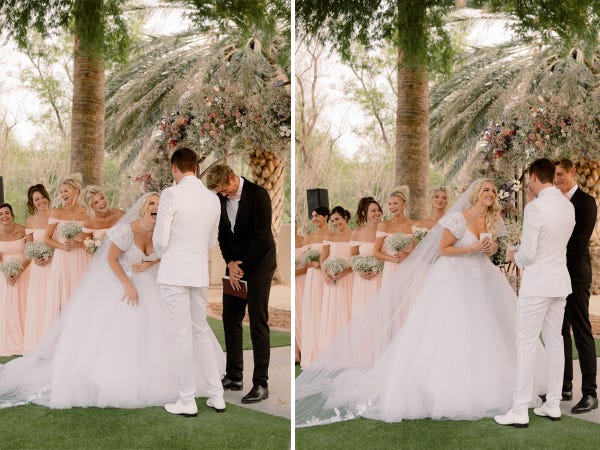 He lived up to his word right away, as Lynch started giggling when he mentioned how much she laughs when he snorts.

Lynch also said she was laughing because she was overwhelmed by how emotional Funk was, as he was crying during the ceremony.

"I was laughing, borderline almost crying, because Capron was such a wreck," she said. "He was a big puddle."

Lynch and Funk were joyful after the emotional ceremony. 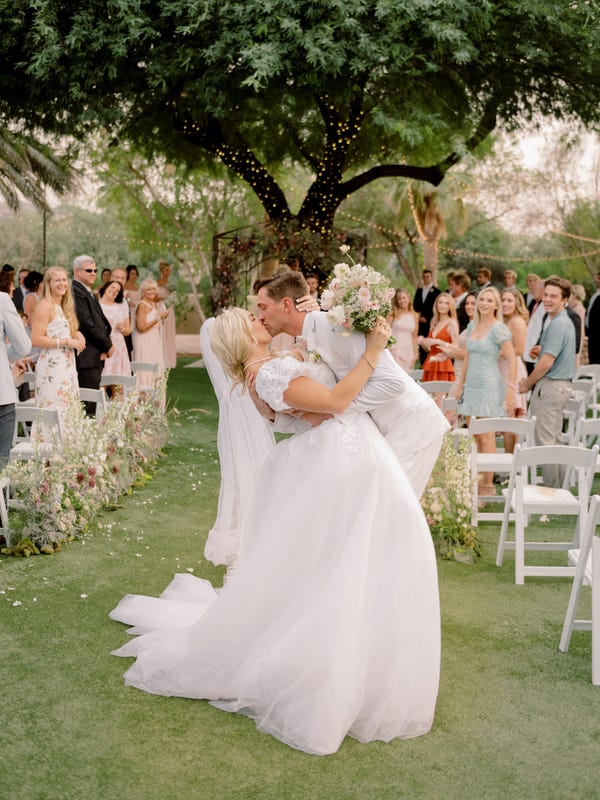 The ceremony took place outside, while the reception was indoors.

Guests had their temperatures taken upon arrival, and the wedding adhered to all government mandates regarding events. 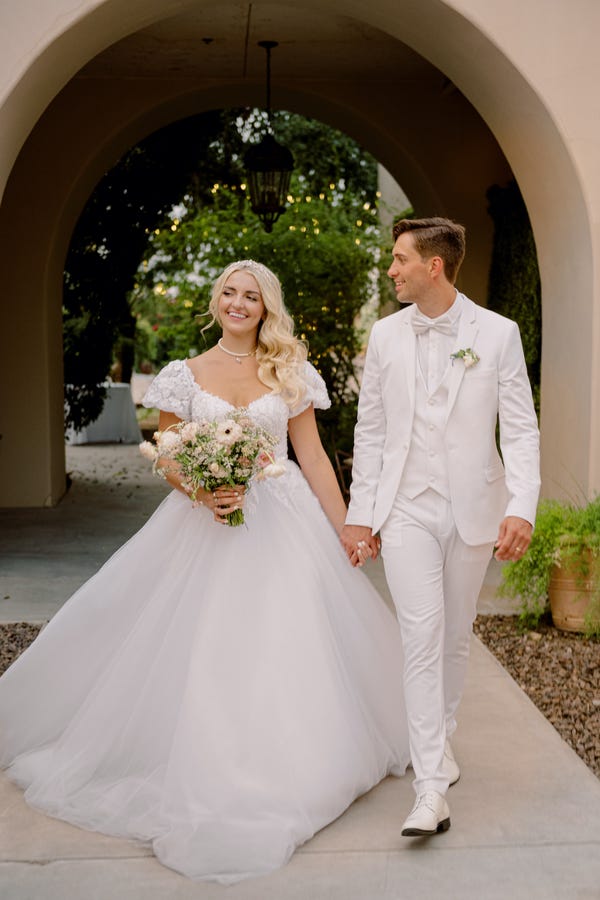 The couple's ensembles were the exact same color, so they coordinated perfectly.

Even Funk's shoes were white. The only color in his ensemble was a boutonnière, which matched Lynch's bouquet. 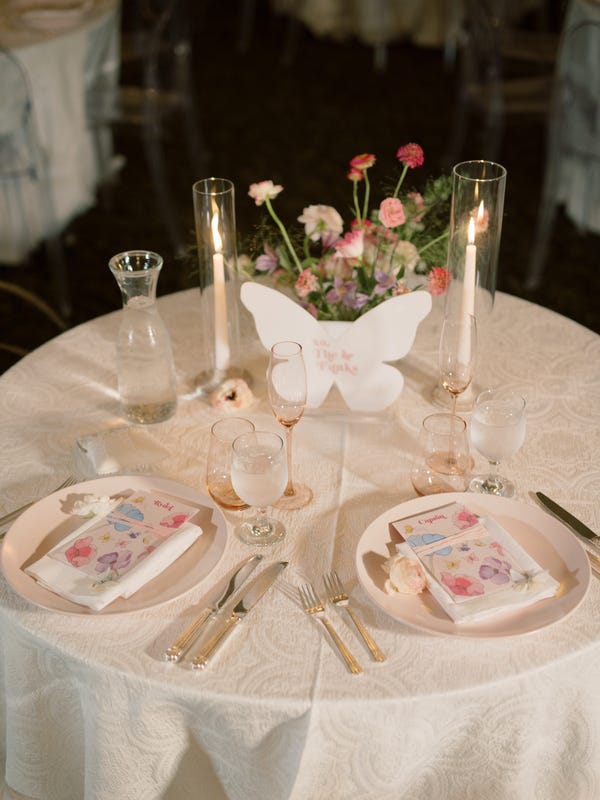 For instance, Lynch loves pink and butterflies, according to Slater.

The couple's wedding cake was also covered in flowers and butterflies. 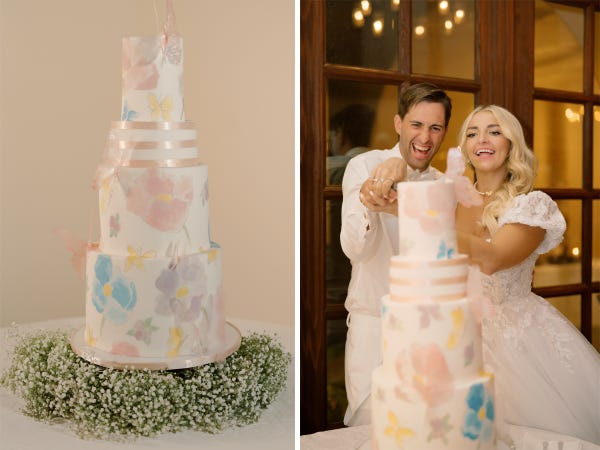 Lynch also brought in surprises for Funk throughout the day. 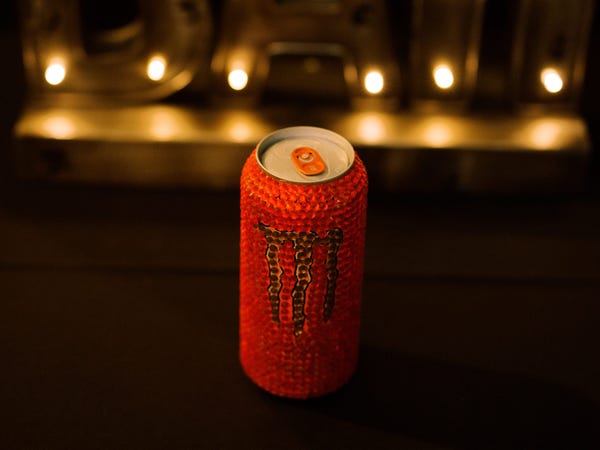 Funk didn't play a big role in planning the event, which allowed Lynch to incorporate special moments to surprise him throughout the day.

For instance, his favorite drink is Monster, so Lynch got him a bedazzled version of the beverage for the day.

The couple also had a custom, tequila-based drink at the event. 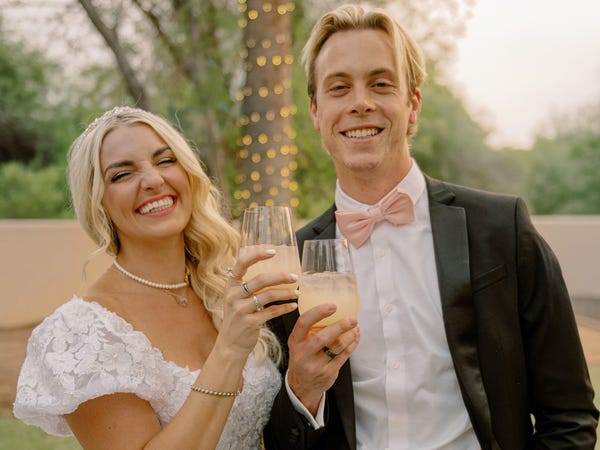 Casamigos provided the tequila, while Winc supplied the wine.

The couple also brought personality to their event with a doughnut bar. 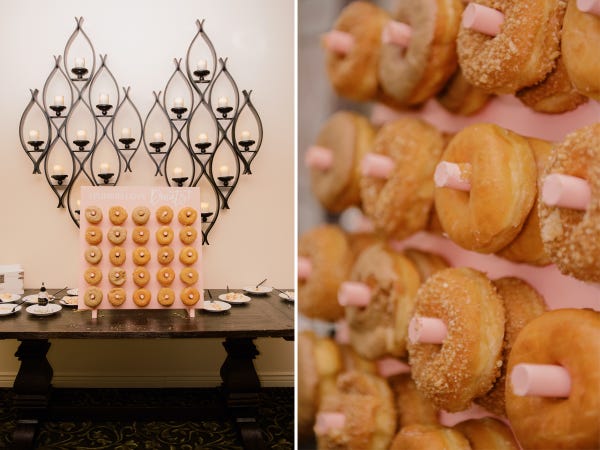 The doughnuts sat on pink pegs, again speaking to Lynch's love of the color.

The couple said the food at the wedding was delicious overall. Creative Hands Cuisine provided the catering.

One of the sweetest moments of the event was when Lynch surprised Funk during their first dance by singing to him. 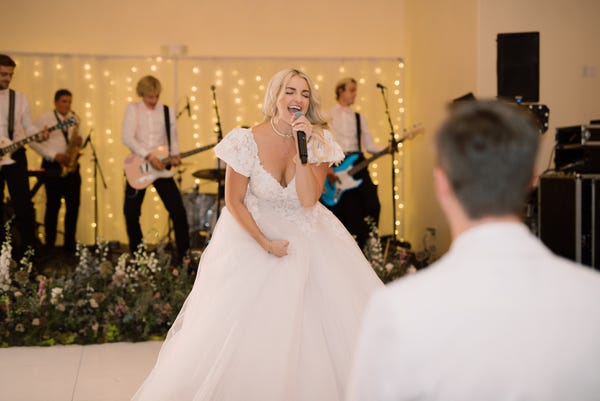 In the middle of their dance, Lynch paused to sing "I Wanna Love You" by Just Friends to her husband while her brothers played behind her.

"It's was the best moment of my whole life," Funk told Insider.

Slater said it was important to Lynch that her brothers performed during the wedding. 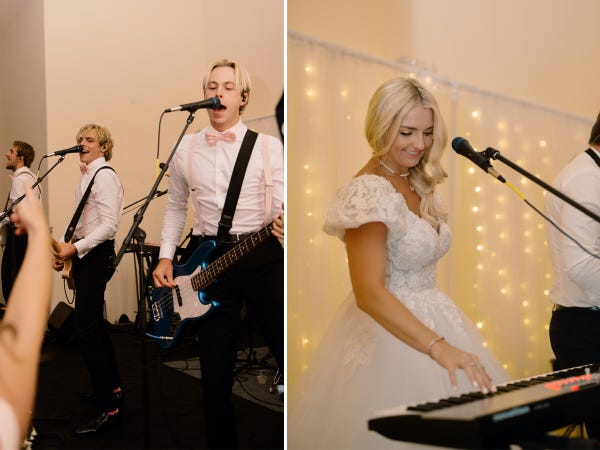 "Having the band perform was such an important thing to her," Slater told Insider. "She said she had always dreamed of being able to watch her band perform and not actually be up there doing it. So it was amazing making that happen for her on her wedding day."

Lynch ended up playing with them for part of the reception, but she also just got to enjoy their music.

Dwight Houser served as entertainment when the band wasn't performing.

A small group of the couple's friends and family attended the wedding, including some celebrity friends. 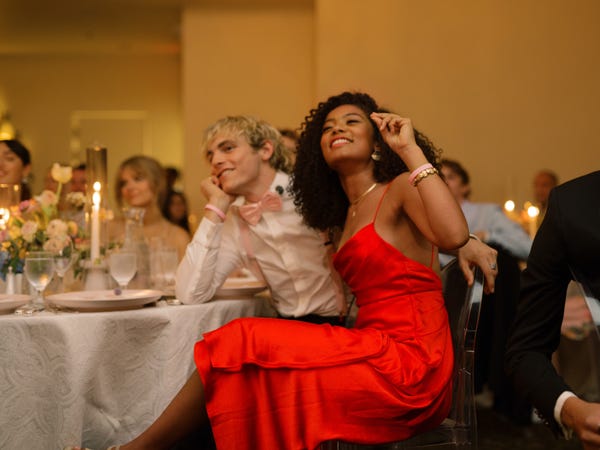 Ross Lynch brought his girlfriend and "The Chilling Adventures of Sabrina" costar, Jaz Sinclair, to the wedding.

"When it comes to married life, I'm most excited to have my prince charming with me forever," Lynch told Insider. 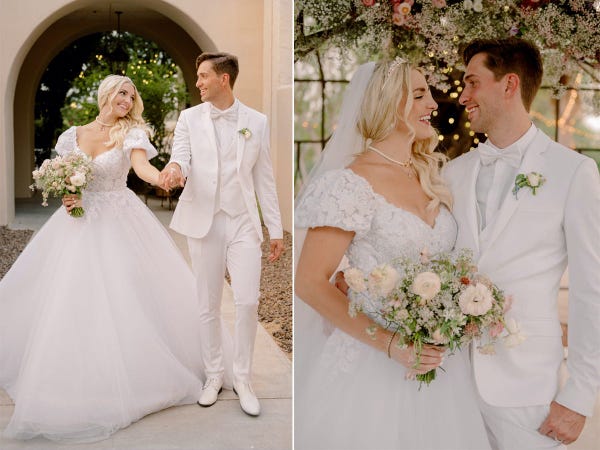 The love between the couple was abundant on their wedding day and when they spoke to Insider.

Lynch and Funk said they're also eager to start a family in the near future. 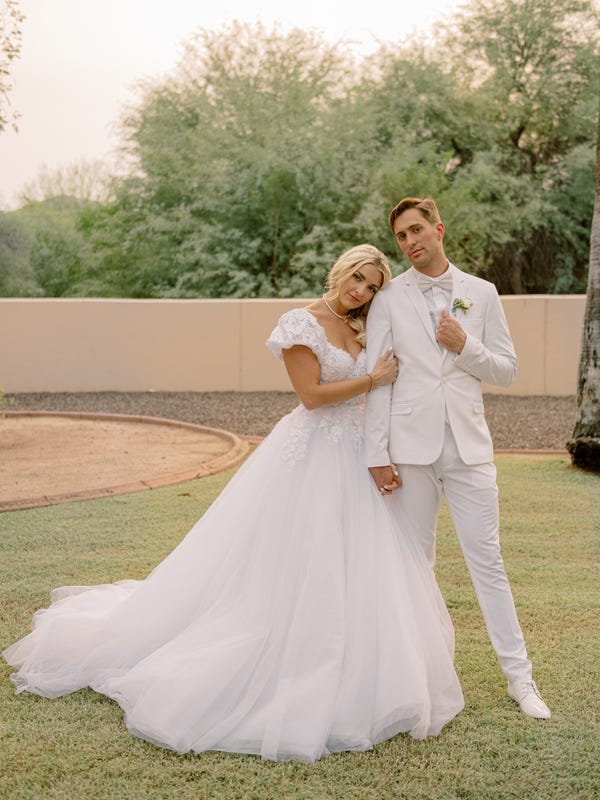 "You are the best husband," she also said to Funk while the couple spoke to Insider.