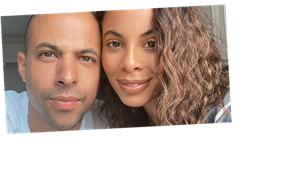 Rochelle and Marvin Humes announced the birth of their adorable son Blake on Friday 9 October, and the new parents have been sharing little updates with fans ever since.

Blake Hampton joins his older sisters Valentina and Alaia-Mai, and the family of five recently enjoyed a lovely trip out, which, it seems, was the newborn’s first venture outside the home.

Taking to Instagram, mum-of-three Rochelle shared the day trip with her two million followers, showing her little ones at a restaurant , and husband Marvin.

Marvin could be seen sitting across from Rochelle and the children looked playful around him, until little Valentina fell asleep in the booth and looked very cosy.

The glamorous family enjoyed a delicious looking meal at their restaurant of choice, and Rochelle appeared to treat herself to a gin and tonic.

Meanwhile, baby Blake looked as content as could be in his pram and he later featured in a lift selfie Rochelle took, with Alaia-Mai posing in a bright yellow jumper.

And it appears Blake was very excited after his day out with his family, as Rochelle filmed him lying on the floor after they’d arrived home, with his eyes wide and bright, gazing into the camera.

Rochelle and Marvin’s trip out comes after Marvin shared an adorable video of his baby boy watching his first ever football match.

Blake is the first son for the former pop star couple, and the JLS singer has wasted no time in spending weekends watching the footie with his son, already attempting to make him a fan of his beloved Chelsea FC.

In a recent Instagram upload, Marvin shows himself sat in front of the television with Blake sat on his lap.

Writing to his 698,000 followers, he said: "Introducing Blakey boy to his team @chelseafc I think he's happy to be a blue," alongside a blue love heart emoji.

He tells fans in the video: "Getting Blake on the blues early doors. What are you saying. Blakey mate? We agree?"

Putting on a baby's voice, Marvin responds to himself: "Yeah, agree dad," before finishing: "Yeah, nice one mate."

Rochelle and Marvin are said to be "over the moon" to have welcomed a baby boy, but are "not planning" to extend their brood further.

A source told OK! earlier this week: "Rochelle and Marvin are over the moon to have a little boy. They are absolutely thrilled.

"They wanted a boy and of course, like anyone, they would be happy with any healthy baby, but they feel like their family is complete with a little boy."