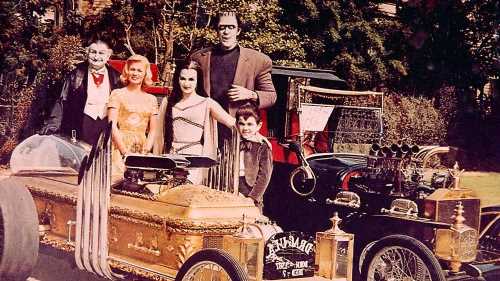 Rob Zombie’s Munster Mansion is almost complete. The filmmaker and musician recently posted an update on his Instagram sharing a series of photos of Mockingbird Lane.

Zombie has been sharing plans for his upcoming big-screen adaptation of “The Munsters” TV series via his Instagram page.

The update follows a post earlier this month where Zombie teased, “The crew is hard at work bringing 1313 back to life. As you can see the iconic house is beginning to emerge. This talented group of carpenters and painters are trying to recreate every little detail perfectly.”

As previously mentioned, the director will be building all of Mockingbird Lane for this film adaptation which is being filmed in Budapest, Hungary. The original Munsters house used in the 1964-66 series, located at 1313 Mockingbird Lane, was an exterior set at Universal Studios.

He has also shared peeks into costume and makeup creations for the famous family. “Good old Herman’s flathead appliance is out of the mold and ready for painting,” Zombie wrote in another post relating to the family patriarch.

While no cast has yet been revealed, he shared the costume design in the film will pay tribute to the show’s classic wardrobe. “A couple more pieces of classic wardrobe that are in the works. Herman and Lily have quite the extensive array of outfits in THE MUNSTERS,” he wrote in a post of concept art.

Zombie has been chasing the film for 20 years. He began directing horror films in the early 2000s, most notably “House of 1000 Corpses,” “The Devil’s Rejects” and the 2007 reimagining of John Carpenter’s “Halloween” as well as its sequel, “Halloween II.” The project will be housed at Universal’s 1440 Home Entertainment, the direct-to-video entertainment label of the studio.