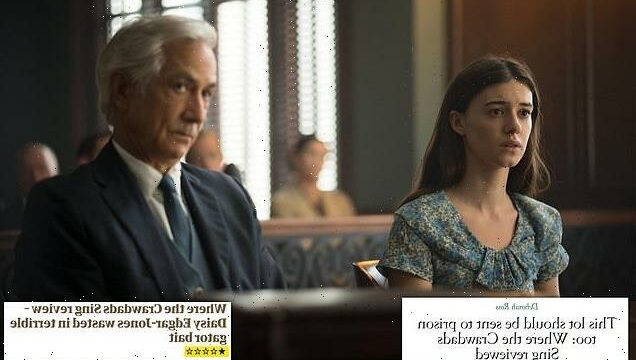 Is Where the Crawdads Sing the biggest flop of the year? Reese Witherspoon’s adaptation of Delia Owens’ hit novel is panned by UK critics who say it’s ‘bland’ and ‘cinematic mush’

One of the most highly-anticipated films of the year, Where the Crawdads Sing was supposed to make waves in the movie world.

Millions of fans of the critically acclaimed novel by Delia Owens have eagerly waited for its film adaptation – but their excitement may fall flat if reviews are to be believed.

The film, from Reese Witherspoon’s production company Hello Sunshine and directed by Olivia Newman, has been panned by critics across the board in early reviews.

Starring Daisy Edgar-Jones as protagonist Kya Clark, the ‘Marsh Girl’, the film follows her as she learns to fend for herself following abandonment by her mother, father and older siblings. 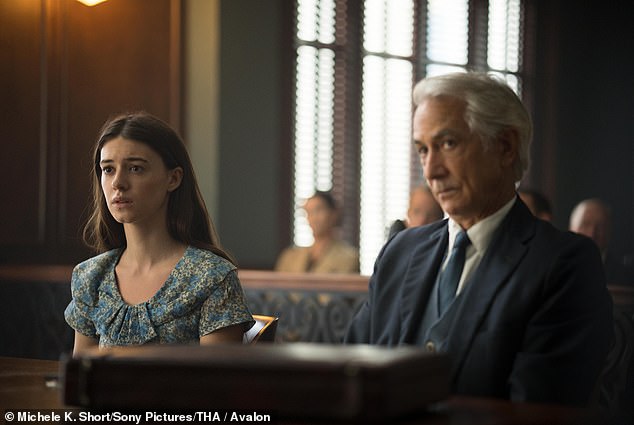 Daisy Edgar-Jones, who shot to fame in the BBC adaptation of Normal People, doesn’t seem to have struck the same notes with her Hollywood debut

Outcast her entire life for living in the bayou, she becomes the prime suspect in the killing of a popular football player – whom Kya was romantically involved with.

Since the novel hit shelves in 2018 it has sold more than 12 million copies worldwide, so there were high expectations for the film adaptation.

But according to critics the anticipation is misplaced, with The Guardian’s Peter Bradshaw panning the movie as ‘gator bait’ in which Daisy Edgar-Jones ‘deserved better’.

Donald Clarke of The Irish Times went one step further, criticising the film’s ‘blandly attractive characters’ who ‘spend their time wandering along shorelines’. 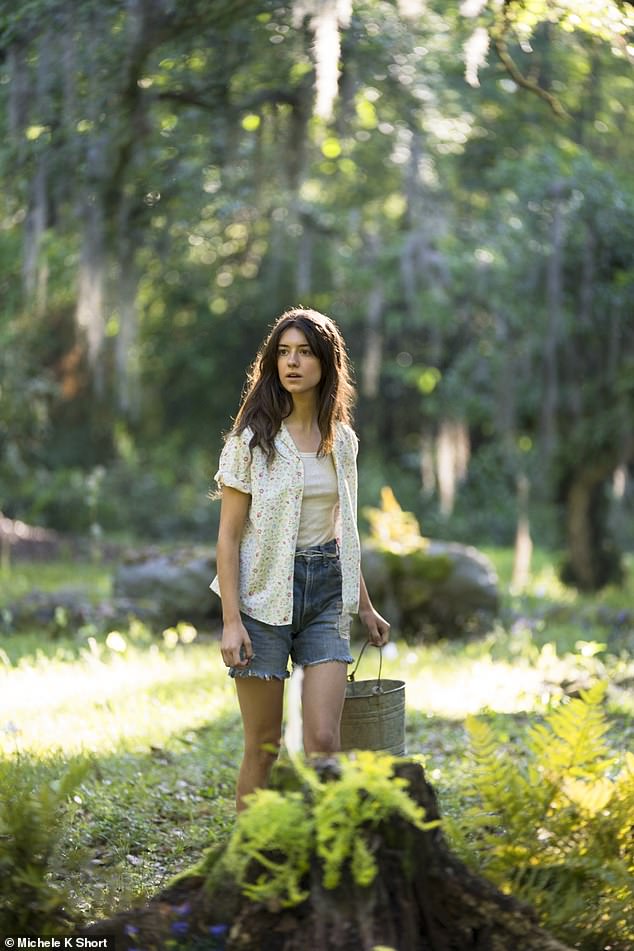 He added that, after seeing the film, he will not be bothering to read the book.

Brian Viner for the Daily Mail criticised the film’s depiction of the ‘Marsh Girl’ – pointing out that Edgar-Jones looked more like she was ‘going to Waitrose’. 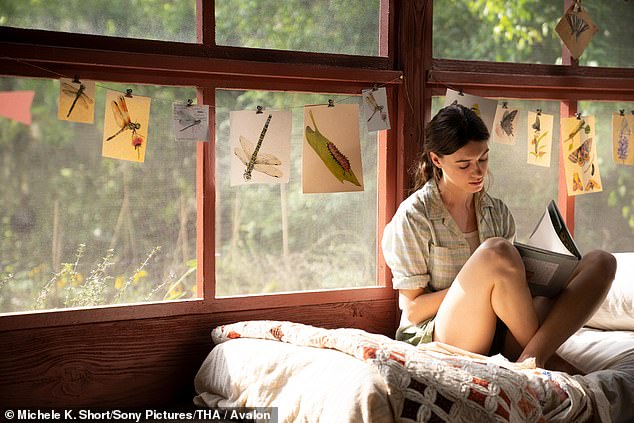 Brian Viner wrote: ‘Where The Crawdads Sing turns a stirring and suspenseful story into cinematic mush.

He added: ‘There were conspicuous echoes of Harper Lee’s To Kill A Mockingbird, never a bad thing, in the 2018 bestseller by Delia Owens. But Olivia Newman’s picture systematically squanders all the virtues of the source material.

‘It really could be shown in film studies courses as an example of the pitfalls that directors and screenwriters should sidestep. This movie plunges waist-deep into just about all of them.’

Viner added one of the main issues with the film was Edgar-Jones herself.

He wrote: ‘Worse than miscast, she is misdirected. This supposedly feral child looks like she’s learnt self-sufficiency by being allowed, occasionally, to go to Waitrose on her own. ‘

Panning what he described as a ‘largely terrible film’, Donald Clarke wrote: ‘Box-fresh and laundered to a fault, the blandly attractive characters spend their time wandering along shorelines as if in an evasive American television commercial for prescription incontinence medicine (warning: Where the Crawdads Sing may cause nausea and drowsiness).’

‘There is not a rough angle in the piece. The older characters conform to ancient, sometimes offensive soap-opera stereotypes.

The younger male leads are so weirdly interchangeable — exercises in rural Stepford — that name tags should have been issued to help us tell them apart.

‘Daisy Edgar-Jones does her best, but no actor could make sense of the insanely compromised protagonist.’ 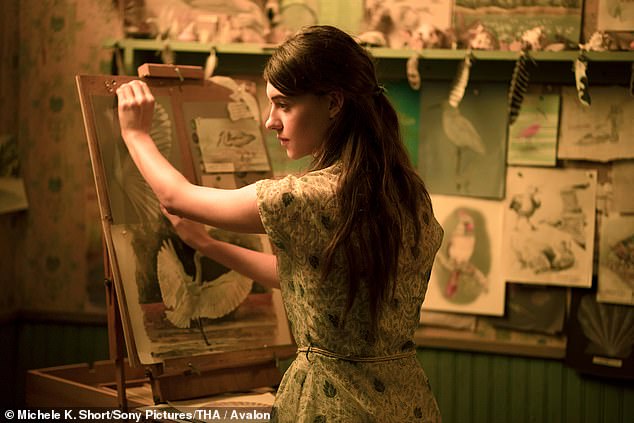 He wrote: ‘The drama drones on and on and on, leaving us to wonder, with increasing urgency … when, oh when, are we going to get the crucial flashback to which we are surely entitled?

‘The scene when the film shows us, on screen, moment-by-moment, what actually happened, and what responsibility the participants actually have.

‘Well, suffice it to say that what we get is a hilarious and ridiculous cop-out, a cakeist twist that left me yearning for the gators gliding around in the marsh to chomp down on everyone involved.’

He added Daisy Edgar-Jones was ‘wasted’ in the role of Kya.

Charlotte O’Sullivan agreed with fellow critic Viner that Daisy Edgar-Jones is ‘miscast’ in the role.

She wrote: ‘I’d rather eat a box of Caran d’Ache pencils than rewatch this mess.

‘Still, I’m not horrified it’s found an audience (it’s a hit, in the US), because Kya the pariah is definitely deeper than she looks.’

The critic also took aim at the script and wrote: ‘Seagulls pecking at a keyboard could come up with more involving dialogue and Smith only adds to the overwrought yet soporific mood.’

She wrote: ‘I hoped a twist might reveal him to be an actual robot; one whose implacable geniality so frustrates Kya that she pushes him into the marsh, causing him to short circuit (at least then a few sparks might fly).’ 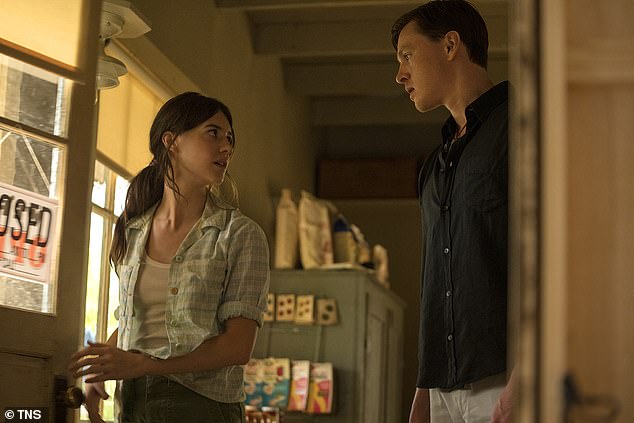 While The Spectator didn’t rate the film out of five stars, Deborah Ross’s opinion was clear

While Deborah Ross for The Spectator did not rate the film out of five stars, readers of her review can probably guess for themselves how she would have ranked it.

She wrote: ‘Send everyone involved to prison.’

Deborah added: ‘All the relationships are simplistic – I had to check it wasn’t a YA novel – and it’s clunkily directed by Olivia Newman.

‘You never feel Kya’s connection to her environment, even though I’m guessing that should be of utmost importance.

‘For a film about what it is to be wild it’s incredibly tame.

‘Plus you don’t even encounter any crawdads. I probably conflated crow and jackdaw in my mind so assumed they were birds but I have just looked them up. They’re crayfish!’

A feral girl? Daisy looks like she’s off to Waitrose: BRIAN VINER reviews Where The Crawdads Sing

Great and good novels, as we all know, face a perilous journey from printed page to silver screen. The new Netflix version of Persuasion offers a salutary lesson in how not to adapt a book, and here comes another. Where The Crawdads Sing turns a stirring and suspenseful story into cinematic mush.

There were conspicuous echoes of Harper Lee’s To Kill A Mockingbird, never a bad thing, in the 2018 bestseller by Delia Owens. But Olivia Newman’s picture systematically squanders all the virtues of the source material.

It really could be shown in film studies courses as an example of the pitfalls that directors and screenwriters should sidestep. This movie plunges waist-deep into just about all of them.

The English actress Daisy Edgar-Jones, who became so convincingly Irish in the TV hit Normal People, here adopts a whole new accent as Kya, who in the 1950s is abandoned by both parents and grows up fending for herself in the marshlands of coastal North Carolina. By the time she has reached her teens, in the 1960s, the local townsfolk have shunned her, regarding her as savage and contemptuously nicknaming her ‘marsh girl’.

Nevertheless, Kya meets and falls for the preternaturally kind and respectful Tate (Taylor John Smith), who gently teaches her to read and write. Together, they are a sugary young dream, less Tate and Kya than Tate & Lyle.

Moreover, Tate shares Kya’s love of nature, which she has somehow parlayed into a professorial-level knowledge of the birds and shellfish (a variety of which are colloquially known as crawdads) that exist in the marsh.

Handily, she can also draw like Leonardo da Vinci. Trademark look of adoration etched on his handsome features, Tate tells her that she really should send her wildlife sketches to a publisher. And darn it if they don’t turn out to be just what the world of publishing was waiting for.

In the meantime, however, Tate heads off to college, where his gigantic heart evidently no longer has room for Kya. So she takes up with the town’s football hero, Chase (another Brit, Harris Dickinson), and while she might understand the inner workings of your average crustacean, she does not see that he is rotten to the core.

Throughout all this we are whisked back and forth in time, between Kya’s burgeoning career, her romantic adventures, and a later murder trial, in which she is the defendant. I think that gives you the narrative without too many spoilers. In any case, the big spoilers all come courtesy of Newman and screenwriter Lucy Alibar, who don’t so much sanitise the story as scrub the life out of it.

I’m loath to say so, because she’s an engaging young actress, but a good deal of the problem lies with Edgar-Jones. Worse than miscast, she is misdirected. This supposedly feral child looks like she’s learnt self-sufficiency by being allowed, occasionally, to go to Waitrose on her own.

Every time the story demands an unequivocal punch, it delivers a lacklustre slap. Tate and Chase are no more than caricatures of good and bad, while Kya’s doughty lawyer in the murder trial, played by David Straithairn, might as well be a hologram of Mockingbird’s Atticus Finch.

On the upside, there’s some tip-top cinematography; the North Carolina wetlands never looked lovelier. But even that compounds the vague feeling, when you stagger out after two of the longer hours you’ll endure at the cinema this year, that you’d have derived as much pleasure from an extended shampoo commercial.