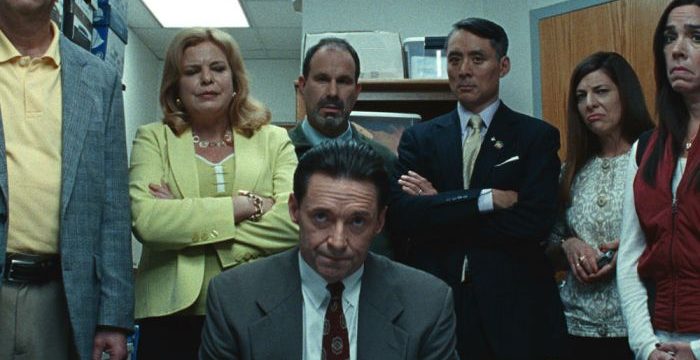 The film arrives only two days after actress Felicity Huffman explained to a California judge why she would attempt to deceptively boost her daughter’s SAT scores with the help of the consultant at the heart of the Varsity Blues admissions scandal. Huffman shared the news cycle with Ronan Farrow, who published an explosive report about deceased, accused predator Jeffrey Epstein’s financial involvement and alleged influence in a research lab at MIT.

Janney’s Gluckin, who according to filmmakers stole a shocking $4.2 million, confesses her crimes to her husband and two kids early on in the film, saying: “I stole from them. We all did. Your clothes, car, college. You didn’t want state college, you wanted private college. I wanted you to be happy with me.”

Huffman’s contrite letter, which was widely covered by the media on Friday, had similar arguments.

“As warped as this sounds now, I honestly began to feel that maybe I would be a bad mother if I didn’t do what Mr. Singer was suggesting,” Huffman said of paying Rick Singer $15,000 to raise her daughter’s test scores.

Jackman’s Tassone answers to a board of directors who are positioned as wealthy private citizens, obsessed with improving the academics and appearances of their schools to propel their children to greater success and subsequently raise property value. Tassone, in turn, sees himself as a community leader and spokesmodel entitled to $30,000 dry cleaning tabs, cosmetic procedures and first-class getaways with male lovers (he pretends to be mourning a dead wife to his colleagues, while hiding a husband of 33 years in Manhattan and a young male lover in Nevada).

At rock bottom, when the district’s board president played by Ray Romano delivers fatal news that Jackman’s jig is up, his final ace in the sleeve is nepotism. “I can still get Becca into Harvard,” Jackman says, referring to Romano’s on-screen daughter. As evidence of the long financial impropriety unfolds, the premiere audience audibly gasped and hissed, sharing whispered conversations in disbelief.

Tassone and Gluckin’s crimes were exposed in real life by the student journalists writing for the district’s high school paper. A composite of those kids is played ably by Geraldine Viswanathan (also at TIFF with Sundance breakout “Hala”). When she approaches the paper’s editor (Alex Wolff) with proof of Tassone’s criminal activity, he hesitates.

“He’s writing my recommendation letter for college,” Wolff admits through gritted teeth, though he eventually runs the story.

Jackman was not present for the premiere, currently on a world-tour with his one man musical show. Janney spoke about her struggle to find honest motivations to play such a clearly guilty character, citing a run of bad marriages and obligations to her kid as factors.

A young man in the audience raised his hand during a Q&A following the screening, and asked if low salaries and abusive treatment (akin to that of customer service, Jackman suggests in the movie) can lead teachers and administrators to such corruption. It’s been on his mind because his own college, a TIFF screening venue called Ryerson University a few miles away from the premiere, was in the news last year. The student union was under forensic audit for up to $700,000 in dubious spending.

Ripped from the headlines or not, “Bad Education” features desperate, compelling performances from its leads Jackman and Janney. Cory Finley, who directed the acclaimed 2017 film “Thoroughbreds,” directs from a script by Mike Makowsky. As one of the only high profile films in the first few days of TIFF not to have debuted at Telluride or Venice, hopefully “Bad Education” can wake up distributors in a sleepy acquisitions market.