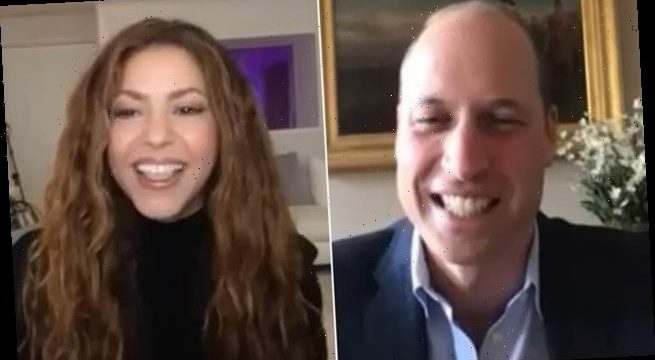 Prince William discussed the importance of education in tackling climate change in a video call with Shakira today – just hours after revealing the Colombian singer is on his council for the Earthshot Prize.

The Duke of Cambridge, 38, recently unveiled a selection of high-profile celebrities who will decide the winners of his prestigious award, which is designed to provide 50 environmental pioneers with the funds needed to further their work in tackling major problems impacting the environment.

Taking to Instagram, Shakira, 43, shared their discussion alongside a caption which read: ‘A bit more of my chat with Prince William about the @earthshotprize’ – inspired by his passion and commitment towards combating climate change and repairing our planet, not to mention his contagious enthusiasm – and so humbled and happy to be a part of this Prize Council.

‘It was a real pleasure getting to spend some time chatting with him about this incredible initiative-can’t wait to see the results!’ 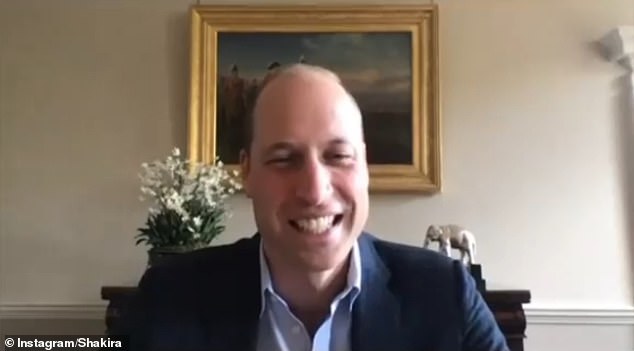 Prince William (pictured), 38, discussed the importance of education in tackling climate change in a video call with Shakira today 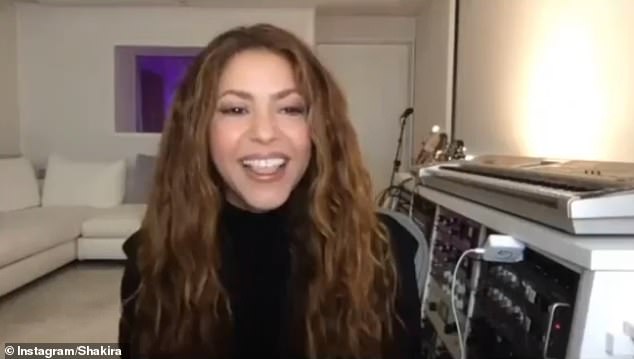 At the start of the video call, the royal said: ‘You and I both have young children and we’ve seen the passion young people all around the globe have for different causes, particularly the environment as well. Why do you think education is so important in protecting out planet?’

Shakira went on to explain that all parents want is for their children to grow up in a safe environment – before admitting her two children have sparked their own passion for looking after the environment.

‘I think we’re biologically designed to try to preserve our species and all parents want is for their children to grow and be in a safe environment,’ she continued. ‘It’s in our DNA.

‘My eldest son Milan, he’s seven-years-old now, but he began asking questions about the environment when he was about five. Now, whenever I brush his teeth and I leave the water tap running for too long, he’s the one reminding me.

‘My little boy Sasha he’s five, and he’s already so concerned about plastic pollution. When he sees garbage in the street, on the beach, he’s the one who wants to pick it up.

‘One time we went around the block with gloves and picking up the trash around the neighbourhood. I thought it was such a beautiful family activity. It sent me a signal and made me see how worried they are about the environment.’ 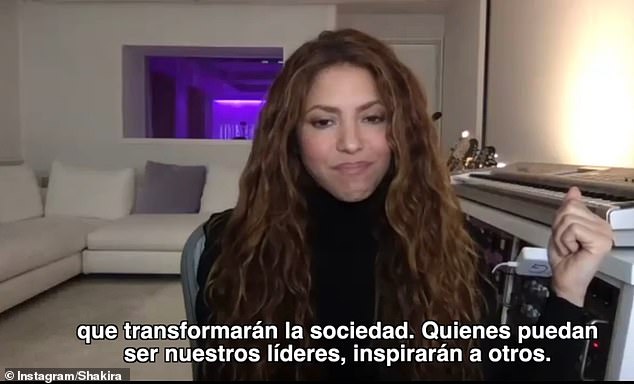 The Duke of Cambridge commended Shakira’s children for recognising the urgency to make a change. Pictured, during the video call

The singing sensation went on to say she she wants to ‘take advantage of that sensibility’ and show them that if everyone is able to come together as a collective, ‘we can solve the greatest problems that we have in humanity.’

She continued: ‘Because their generation has to think differently, they’re the ones who have to innovate.

‘Your children, my children, they have to find ways to reduce carbon emissions, to repair oceans, to clean the air. We need young minds to be informed and invested, that’s why education is so important. But we can’t stand still, we haven’t led the way and we have to do it now.’

Prince William agreed he’s concerned how the issues of the environment could cause anxiety for the future generations – and commended Shakira’s children for recognising the urgency to make a change.

Who will join Prince William on the Earthshot Prize Council?

Queen Rania of Al Abdullah is the queen consort of Jordan and is known for her humanitarian focus and for using her platform to advocate for women’s right and issues of sustainability.

Cate Blanchett is an Oscar winning actress, with roles in blockbusters including ‘Elizabeth’, ‘The Curious Case of Benjamin Button’, ‘The Aviator’ and as Hela in ‘Thor: Ragnorak’.

She is also an avid environmental campaigner, having been inspired to get involved by Al Gore, and has worked tirelessly for causes both in her native Australia and around the globe.

She is an ambassador for Australian Conservation Foundation and visited politicians and people in Queensland to raise awareness of climate issues.

Christiana Figueres is a diplomat with experience in high level national and international policy and multilateral negotiations. She was appointed Executive Secretary of the UN Framework Convention on Climate Change (UNFCCC) in July 2010, six months after the COP15 failed in Copenhagen.

During the next six years she worked to rebuild the global climate change negotiating process, leading to the 2015 Paris agreement, widely recognized as a historical achievement.

Dani Alves is a professional footballer for Brazil. Speaking upon being chosen for the council, he said: ‘It’s the most important power in the world – nature. If you give it good things then nature gives good things back to you.

Sir David Frederick Attenborough is an English broadcaster and natural historian. He is best known for writing and presenting and is considered a national treasure in the UK.

Sir David has become more vocal in his support of environmental causes over the last two decades, saying: ‘I really do think things are about to start to move, and this sort of idea could be the spark that is really going to give it the lift and the impetus to develop into something huge.

‘It’s a great source of hope, and I hope it spreads around the world.”

Hindou Oumarou Ibrahim is an environmental activist and geographer. She is the Coordinator of the Association of Peul Women and Autochthonous Peoples of Chad (AFPAT) and served as the co-director of the pavilion of the World Indigenous Peoples’ Initiative and Pavilion at COP21, COP22 and COP23.

Indra Nooyi is an Indian-American business executive and former chairman and chief executive officer (CEO) of PepsiCo, who is consistently ranked as amoung the top 100 most powerful women in the world.

In 2017, she was ranked the 2nd most powerful woman once more on the Forbes list of The 19 Most Powerful Women in Business.

She serves on the boards for Amazon and the International Cricket Council.

Jack Ma is a Chinese business magnate, investor and philanthropist, as well as the co-founder and former executive chairman of Alibaba Group, a multinational technology conglomerate.

Ma is a global ambassador for Chinese business and is often listed as one of the world’s most powerful people, with Forbes ranking him 21st on its “World’s Most Powerful People” list.

As of 29 July 2020, with a fortune of $48.2 billion, Ma is the second-wealthiest person in China and one of the wealthiest people in the world.

Naoko Yamazaki is a former Japanese astronaut and the second Japanese woman to fly in space.

She revealed: ‘It’s been more than half a century since human beings reached space and even the moon. However, the Earth is our only home planet.

‘When I saw the International Space Station, I saw it as a symbol of international collaboration. If we all put our forces together for a common goal, we can make a great achievement.”

Ngozi Okonjo-Iweala is a Nigerian-born economist and international development expert. She sits on the Boards of Standard Chartered Bank, Twitter, Global Alliance for Vaccines and Immunization (GAVI), and the African Risk Capacity (ARC)

Shakira is a Colombian singer, songwriter, record producer, dancer, actress, and philanthropist. She is one of 17 advocates for the UN’s Sustainable Development Goals.

He pledged to give up eating shark’s fin soup, a Chinese delicacy, in association with a WildAid campaign to promote wildlife protection.

He said: ‘I completely agree with you. It is wonderful to hear that your children even at the age of seven and five, they get it and they actually understand and they want to get involved and they’re actively protecting the environment.’

‘I think collective confidence is quiet important. The fact we all need to believe that we can do this together,’ he added.

Shakira also went on to reveal that her children’s school are doing a ‘great’ job of educating about the environment, but said it’s an effort that everyone needs to be campaigning for.

The Colombian singer said she believes it’s achievable for the environment to be repaired within the next ten years.

She continued: ‘I believe in the determination and the force and the brainpower of mankind. We were able to get to the moon, we can do this.

We have evolved so much in the past 100 years, we have all the resources, we have ‘the technology, the ways of communications to solve our common issues as humanity.

‘And that’s why I signed on this project, I know it’s ambitious, I know it’s hard, but I know there are so many that will rise to the occasion, with their own creative solutions and own initiatives ans will transform society.’

The Earthshot Prize which has been likened to a green Nobel Prize, will see see a total of 50 environmental pioneers each awarded a £1million prize for their work towards protecting the environment.

Others on the council include athletes, professional footballer Dani Alves and Naismith Basketball Hall of Famer and environmentalist Yao Ming, as well as environmental activists including Hindou Oumarou Ibrahim and Christiana Figueres.

How is the Earthshot Prize funded?

The prize will be funded by a network of organisations and private philanthropists from around the world.

The first six Global Alliance Founding Partners have been named today with more partners to be announced over the coming months.

Ma is a divisive character and made headlines last year over comments saying employees should be prepared to work 12 hours a day, six days a week.

He also urged employees to have more sex in a bid to have a better work-life balance.

Bloomberg, who ran an unsuccessful campaign to be the Democratic nomineee for US president, is a committed environmentalist and has advocated policy to fight climate change since he was mayor of New York City.

Marc and Lynne Benioff: A millionaire by 25, Marc Benioff was the youngest ever vice-president of software giant Oracle.

Today, Mr Benioff, 55, is worth £5.5 billion thanks to the success of the company he founded shortly after that encounter, Salesforce, which employs 50,000 people around the globe including more than 1,500 in the UK.

His firm is the world leader in ‘customer relationship management software’ which uses the cloud to help businesses organise information about their customers and has an annual revenue of £13 billion.

He is also one of the world’s greatest philanthropists thanks to an encounter with an Indian guru who encouraged him to do more for others.

The tech tycoon donated £1 million of his fortune to support the Mail Force Charity, set up by a consortium led by the Daily Mail, along with another £1 million from Salesforce.

In total he has spent around £20 million sourcing and supplying PPE to hospitals around the world.

In June it announced  two contributions to support people affected by the COVID-19 pandemic in Washington state, adding up to $2.2 million.

The only commercial company on the list, DP World has been recognised for its work on the environment and sustainability.

The Aga Khan Development Network: A network of private, non-denominational development agencies founded by the Aga Khan. Their work addresses a range of issues. Environmental projects include renewable energy in Uganda, clean energy in central Asia and a tree-planting project in Pakistan.