A senior adviser to Prime Minister Scott Morrison attended a meeting about sacking the staffer who allegedly raped Brittany Higgins more than a week after former Defence Minister Linda Reynolds became aware of the accusation.

Police are close to giving prosecutors a brief of evidence about Ms Higgins’ allegations that a colleague raped her overnight on March 23, 2019 in a Parliament House ministerial office. 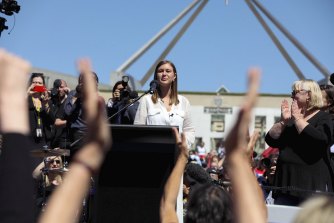 Ms Higgins’ revelations sparked a wave of anger around the nation about the treatment of women in federal politics, and led to other women coming forward to accuse the same man of rape and sexual harassment. Mr Morrison announced a series of reviews to look at harassment and the treatment of political staffers in Parliament House, as well as who in his office knew about the alleged rape.

The Department of Finance revealed in a Senate estimates hearing on Thursday that the meeting between Mr Morrison’s adviser and chiefs of staff for Senator Reynolds and Special Minister of State Alex Hawke took place in Parliament House on April 4, 2019.

This was nine days after Ms Higgins says she told Senator Reynolds’ chief of staff about the allegations and three days after she says the minister became aware.

Ms Higgins has previously said she understood the man was sacked on March 26 before she was asked by the chief of staff to explain what they were doing in the minister’s office late at night.

Finance officials said on Thursday the man had his employment formally terminated on April 5, 2019, on the grounds of “serious misconduct”. He was still employed between March 26 and this official termination.

Mr Morrison has previously said the man was “sacked, removed, quite swiftly over the security breach”.

Questions about when the man’s security clearance, email access and building pass were returned or revoked were taken on notice and or redirected to the Department of Defence.

Finance deputy secretary Clare Walsh said the meeting between representatives for the three ministers and her department was focused on “employment matters” and the process of sacking the staffer.

Her colleague David de Silva said it was a verbal discussion with no written advice provided.

“We often come up to Parliament House to give advice about process,” Mr de Silva said, adding he would double-check if file notes were made at the time about the meeting’s content.

Labor senator Katy Gallagher said the length of time meant the claim made by Senator Reynolds to Ms Higgins that the individual was immediately fired was “not the case”.

“There’s a lot happening in those 10 days between the 26th of March and April 5th,” she said.

Senator Reynolds said later on Thursday that there was a process to be followed, which could take time and there could be a lag between when a decision was made and the formal processes completed.

“Government and bureaucracy things often do not go very fast, but as I said … in any process, including the Department of Finance’s processes, there is a process to be followed,” she told the ABC.

She could not say whether the staffer was paid a salary for the 10 days nor went into detail about whether he had access to equipment or Parliamentary passes, although she noted he was out of the office “straight away”.