Thirty Indigenous communities would be the target of a new COVID-19 vaccination campaign under a plan to close the gap in coverage between Aboriginal and Torres Strait Island people and the broader population. 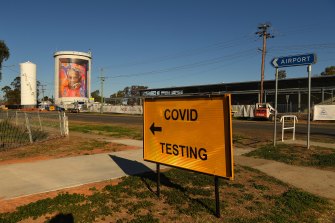 COVID testing in Walgett. Indigenous communities around the country will receive a targeted vaccine push.Credit:Kate Geraghty

General Frewen told a health estimates hearing the vaccination rate had already picked up, with the number of people fully immunised roughly doubling in the last month, but a gap remained.

“There’s clearly more to do. The vaccination of Aboriginal and Torres Strait Islander Australians is a very high priority for me and I’m taking the national cabinet today a plan to accelerate vaccination of Indigenous people,” he said.

The current model being used in western NSW – which has involved AUSMAT and Defence Force teams providing medical assistance as well as support with the immunisation plan – is one COVID Shield will look at for other communities that need it.

“What we are going to do is surge into 30 communities – and 20 of them are non-remote, 10 of them are remote. They are the communities where there are the greatest gaps between the current national vaccination levels and the levels in those communities,” he told the hearing.

Areas with the largest number of Aboriginal and Torres Strait Island people would be prioritised to ensure they were “getting the maximum number of people going forward as quickly as possible”.

Over the next four weeks, the federal government, in partnership with local organisations, would work to boost community engagement with the help of senior or prominent members of the community, General Frewen said.

The number of cases among Indigenous people in western NSW had been getting to “an extremely concerning level”. As of Monday, there were 561 cases in the west, 65 per cent of which were estimated to be in Indigenous people. That day, an Indigenous man in his 50s died from COVID.

Under questioning from Greens senator Rachel Siewert, General Frewen said vaccination efforts would also be focused on local government areas with the lowest immunisation rates, as well as disadvantaged communities.

“We will be working to make sure that, where we need to, we are bringing those communities along faster if necessary to bring them up to where the rest of the nation is nationally,” he said.

“I’m trying as hard as I can to get the absolute maximum vaccination rates for all people in Australia and where communities are lagging behind … I will be working to make sure that not only does it keep pace with the national rollout, but then we see those 70 and 80 per cent targets as consistently as the rest of the nation does.”