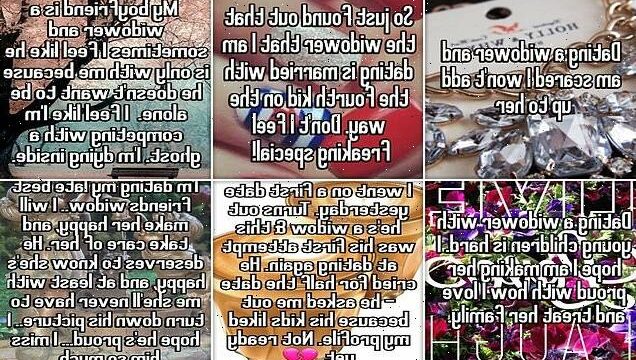 From jealousy over a ‘ghost’ to dating a dead best friend’s wife, these confessions lift the lid on what it is really like to strike up a relationship with someone who has lost their husband or wife.

It can be hard for people to move on after losing a spouse or partner, and these Whisper confessions from around the world reveal what it’s like to be on the other side of the courtship.

The most common concern appears to be that the widow or widower is still in love with their ex wife or husband and the new partner can’t compete.

One woman from Delaware said she felt she wasn’t as attractive as her boyfriend’s late spouse, while a man from New Mexico said his partner doesn’t feel comfortable with any PDA in front of her children.

Rather depressingly, one woman said she felt like she was ‘competing with a ghost and dying inside’ she feels her boyfriend is only with her because he doesn’t want to be alone.

However not all confessions were doom and gloom, there were rays of light among the worries about not measuring up. A man who is now with his late best friend’s partner said he believes his friend would be happy because his wife is being cared for.

Here, FEMAIL shares some of the most eye-opening examples… 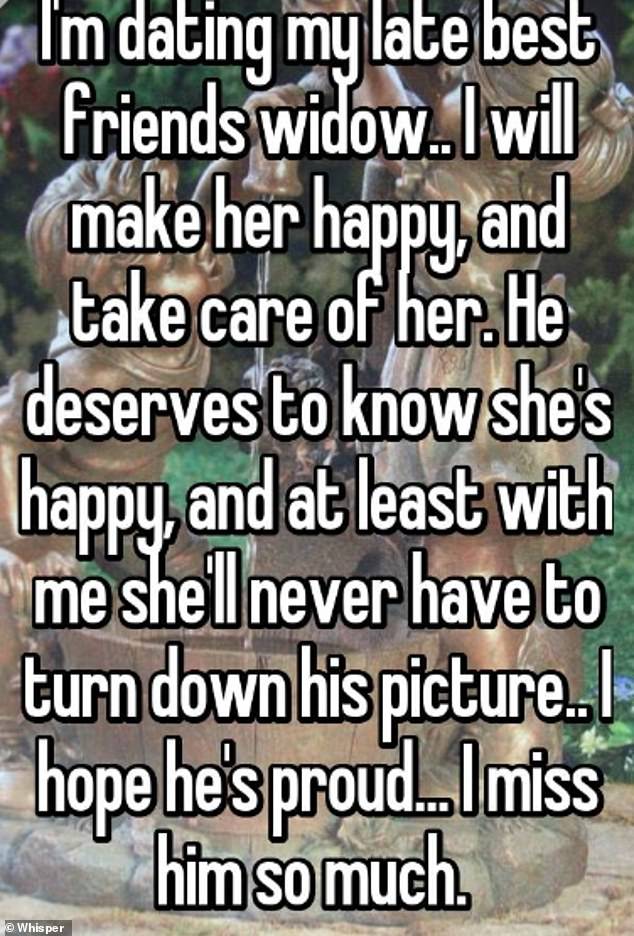 Shared experience: A man from Ontario, Canada, is looking after his late best friend’s wife and says ‘at least she doesn’t have to turn his picture down with me’ 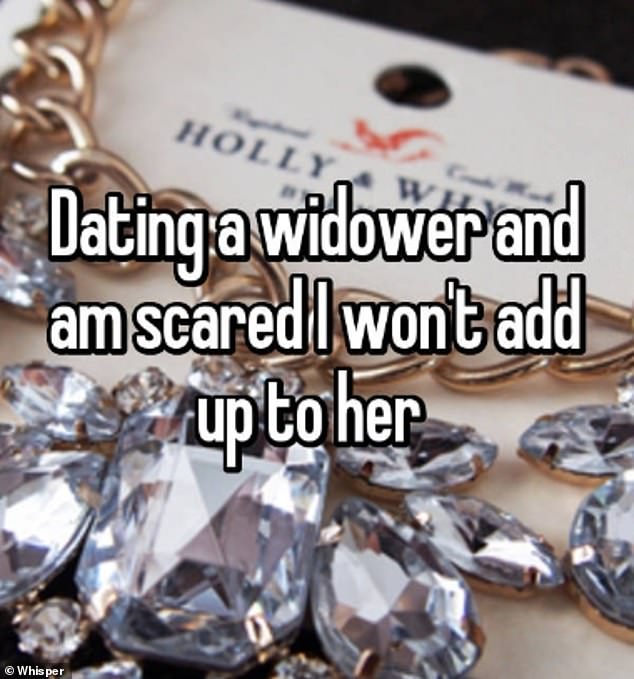 Big shoes to fill: This Whisper user feels she can’t measure up to her partner’s ex-wife. It was one of a number of confessions shared by people who are dating widows or widowers 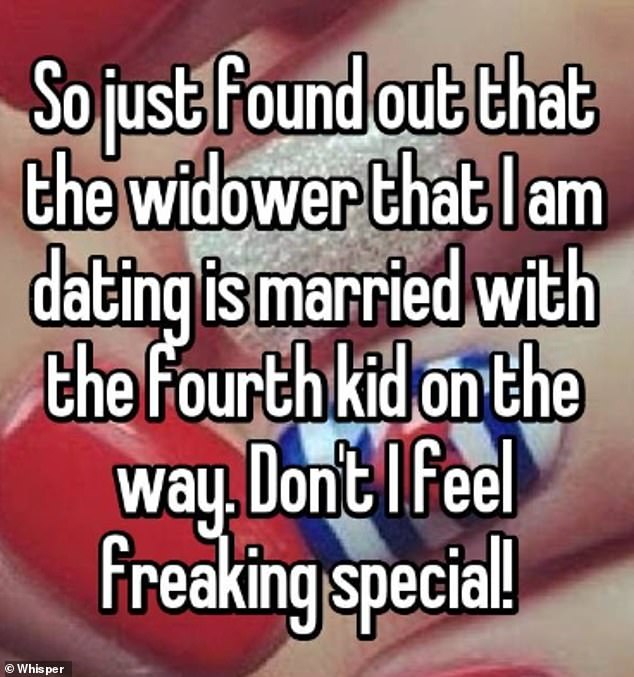 Web of lies: One man was posing as a widower despite his wife – who is very much alive – being pregnant with his fourth child 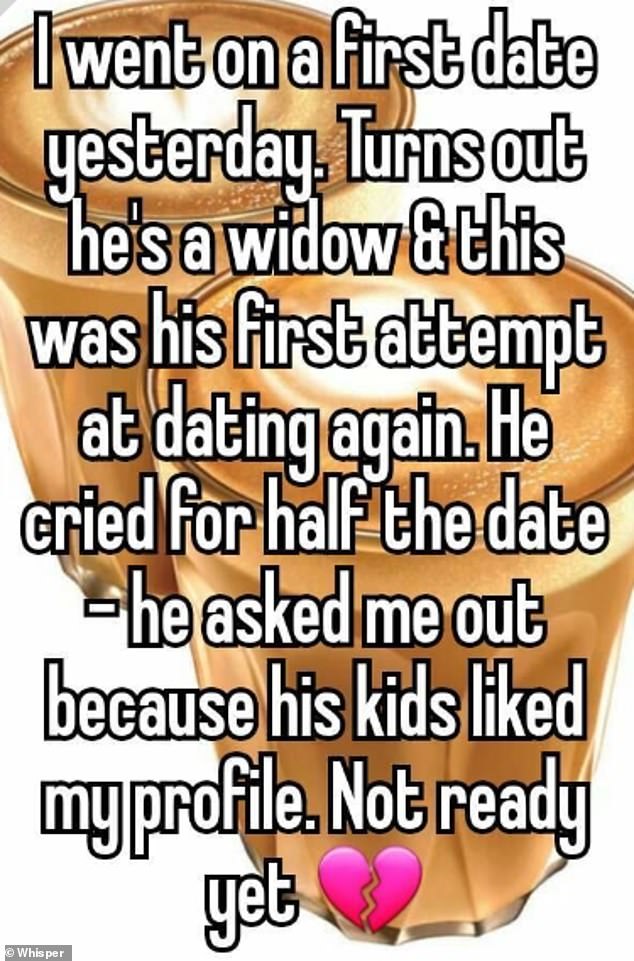 Too soon: A heartbreaking date in Auckland Region, New Zealand, after a man cried and said he only dated this woman because ‘his kids liked her profile’ 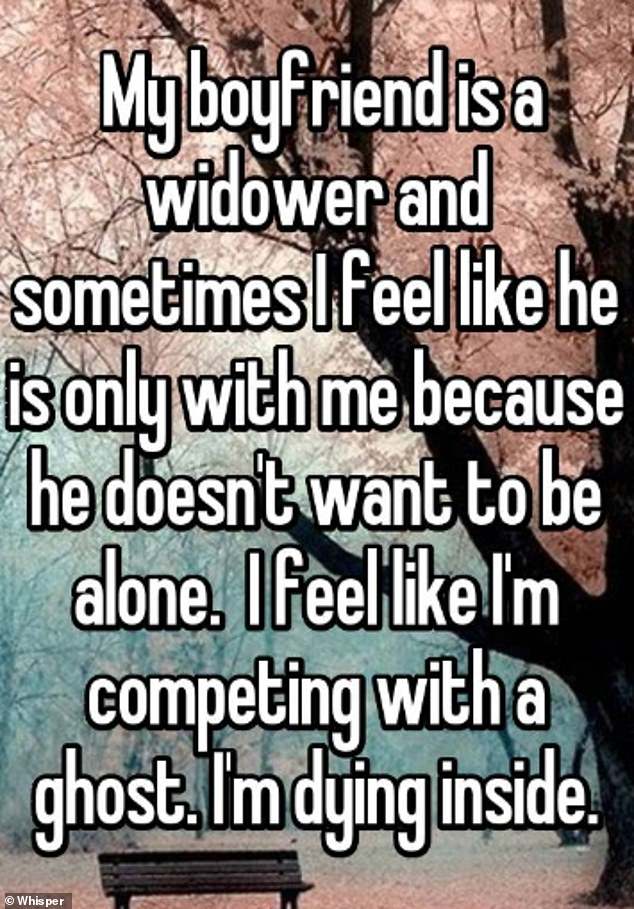 Sleeping with ghosts: A woman claims she is ‘dying inside’ and ‘competing with a ghost’ because she believes her boyfriend isn’t over his late ex 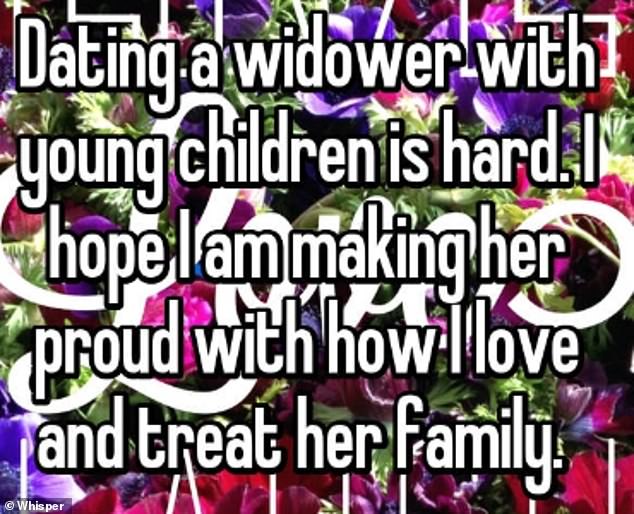 Trying his best: A Texan man has taken on his new family with pride and love even though he acknowledges it can be hard 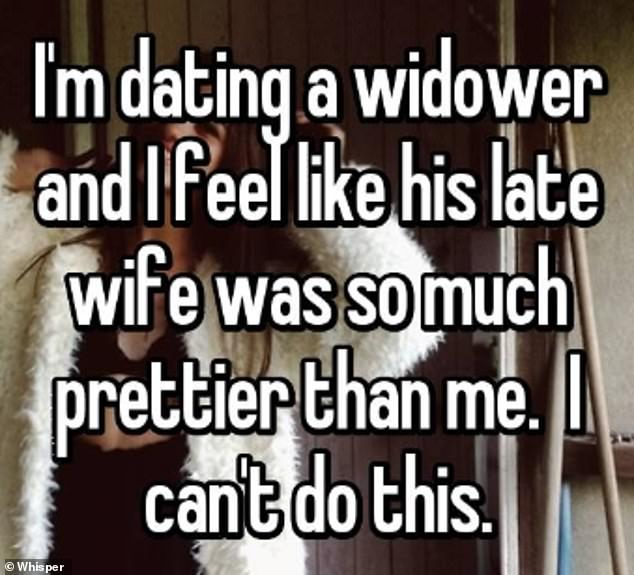 Comparing herself: A woman from Delaware believes her partner’s late wife was ‘so much prettier’ than her and is struggling to shake her insecurities 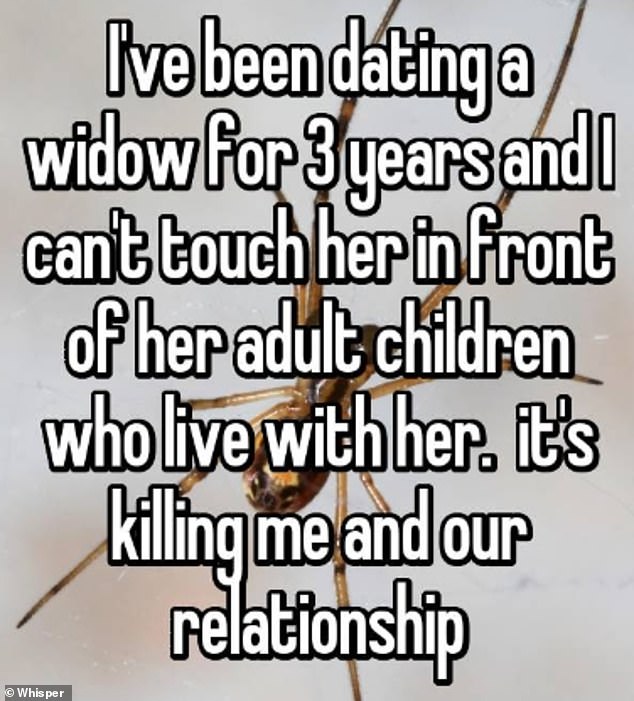 Tearing them apart: A man from Farmington, New Mexico, revealed that shockingly he can’t touch his partner in front of her adult children 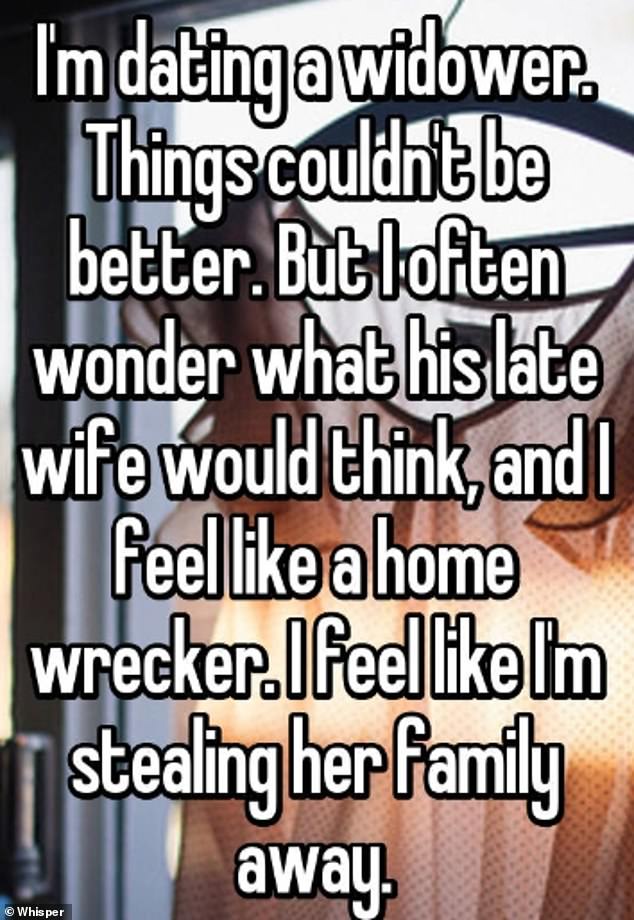 Gone but never forgotten: A woman from Cincinnati, Ohio, admitted she feels like a ‘homewrecker’ and wonders what his wife would think 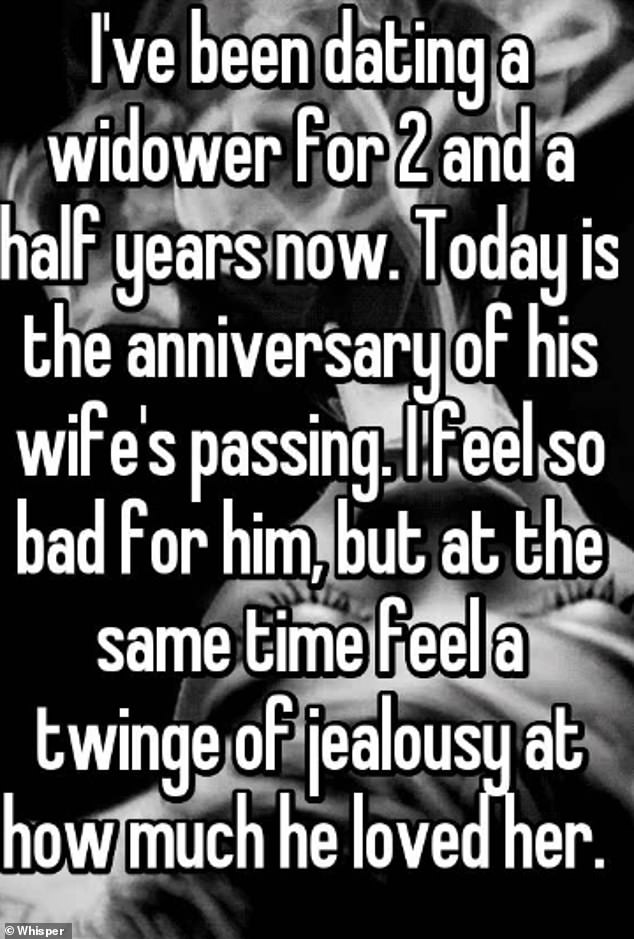 Jealous: A woman from Ohio feels a ‘twinge of jealousy’ at the thought of how much her boyfriend of two years loved his late wife 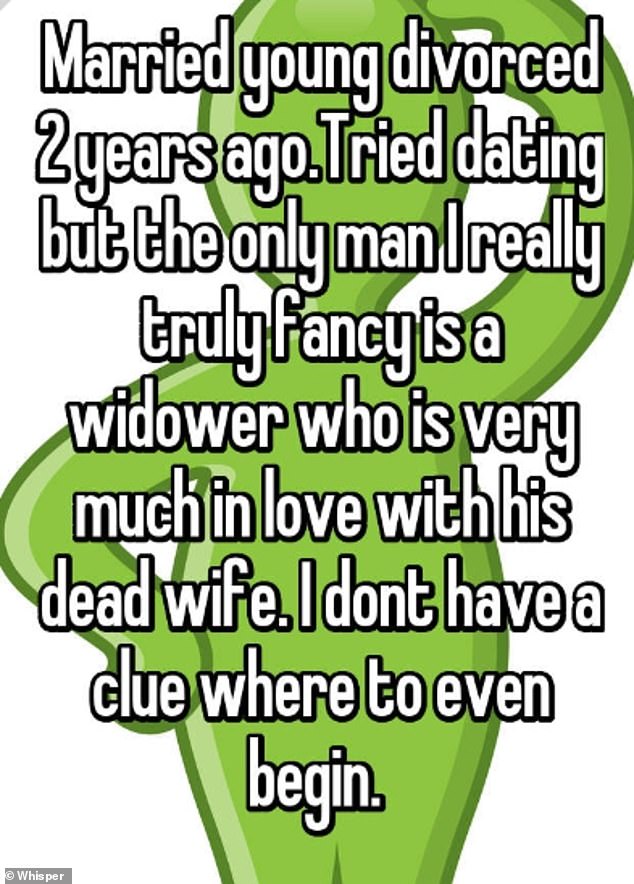 Dying hope: This woman has been divorced and the only man she truly likes is a widower who is still in love with his deceased wife 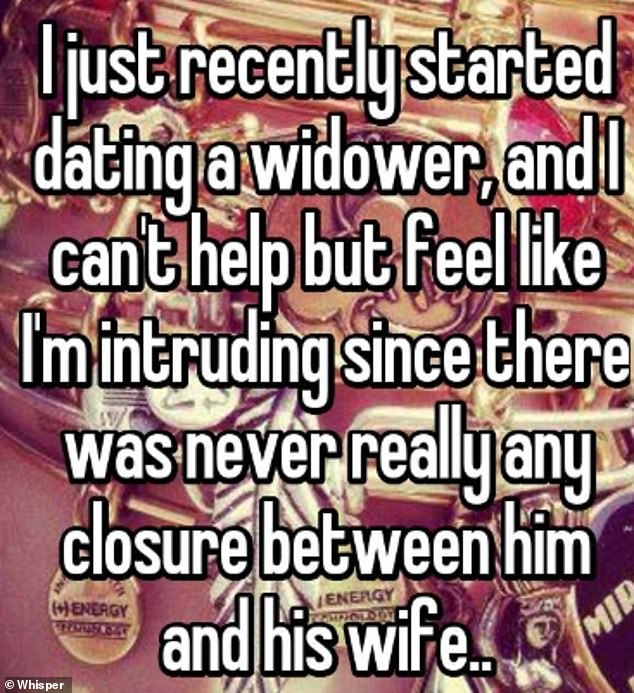 Unanswered questions: A woman from Hephzibah, Georgia, feels there isn’t closure between her new man and his wife who has died 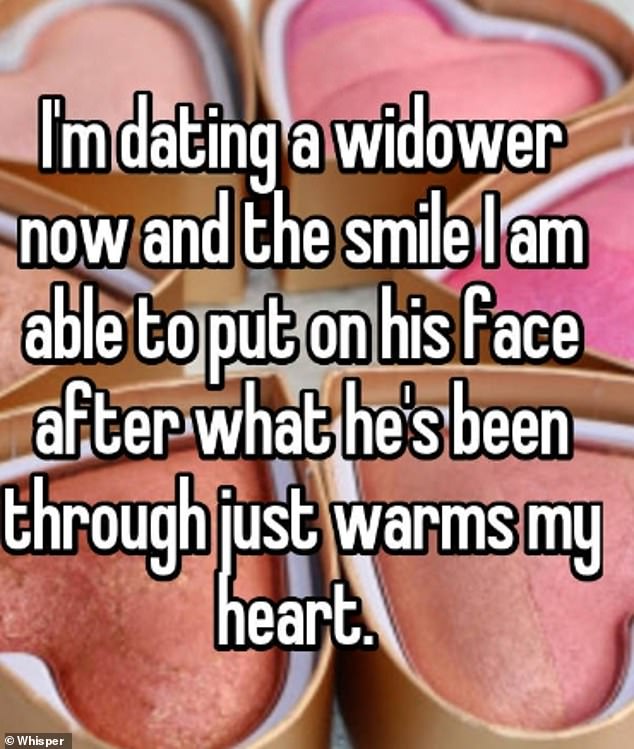 Finding happiness again: One woman is happy she can put a smile on her new partner’s face after what he’s been through 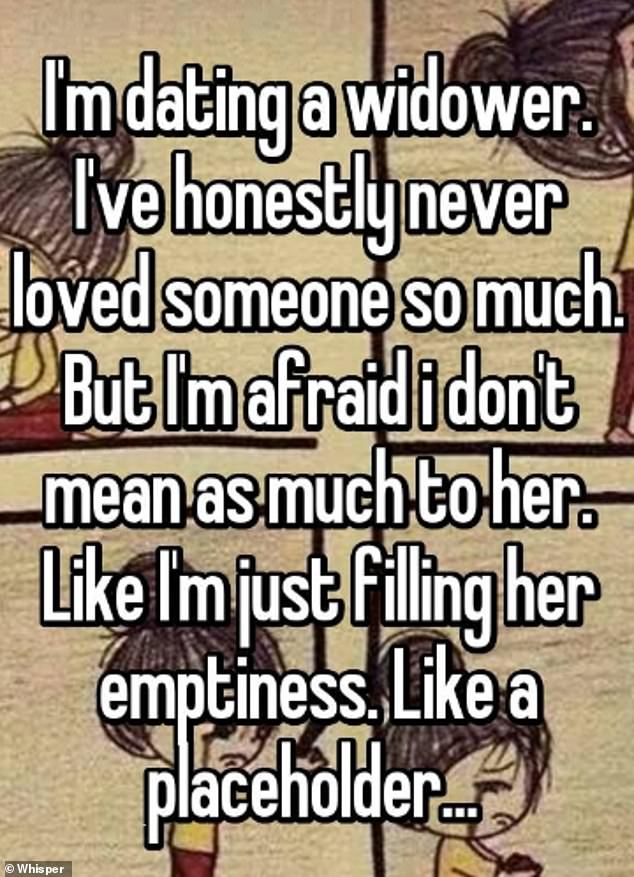 Is she really ready to move on? A man from California is afraid that he’s just a placeholder for his widowed girlfriend