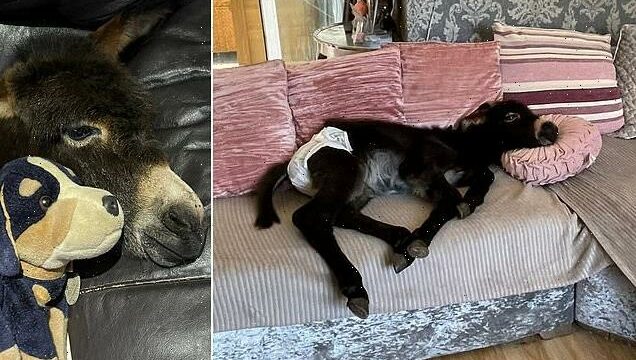 Hoof do you think you’re fooling? Donkey who thinks he’s a DOG loves to go for walkies, play ball and lounge on the sofa

He might just be foal-ing around – but one young donkey has taken to behaving just like a dog after his owner saved his life and raised him alongside the family’s other beloved pets.

Three-month-old Kye was abandoned by his mother, but rescued by John Nuttall, 64, whose family runs a donkey ride business on the Lincolnshire coast.

Having spent much of his early life with the family dogs, Kye goes for walkies, plays ball and even responds to dog whistles. 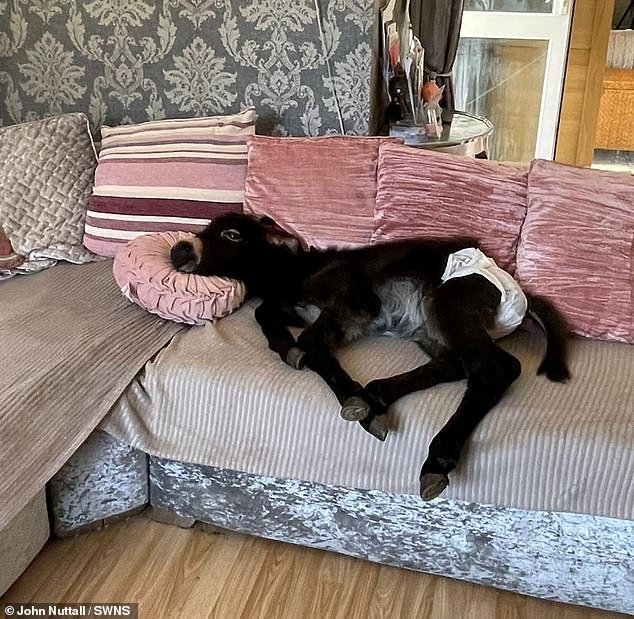 Let sleeping donkeys lie: The beloved pet became one of the family after he was taken in 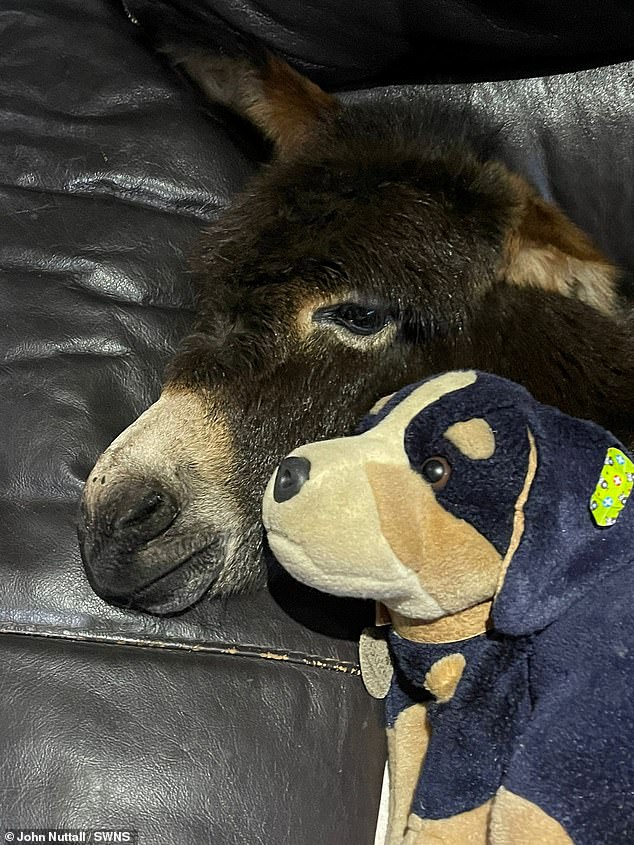 From pack horse to one of the pack: Kye the donkey is said to behave just like any pet dog

The miniature mule began exhibiting hound-like behaviour after his mother rejected him, leaving John and his partner Grazina Pervenis, 40, to hand-rear him.

The pair fitted the foal with a ‘dog nappy’ and shared caring duties for him over the next six weeks in their separate homes, where he often played with their dogs.

John said the time Kye spent with the pups led him to display similar characteristics to them, even though he’s now moved into a paddock with other donkeys. 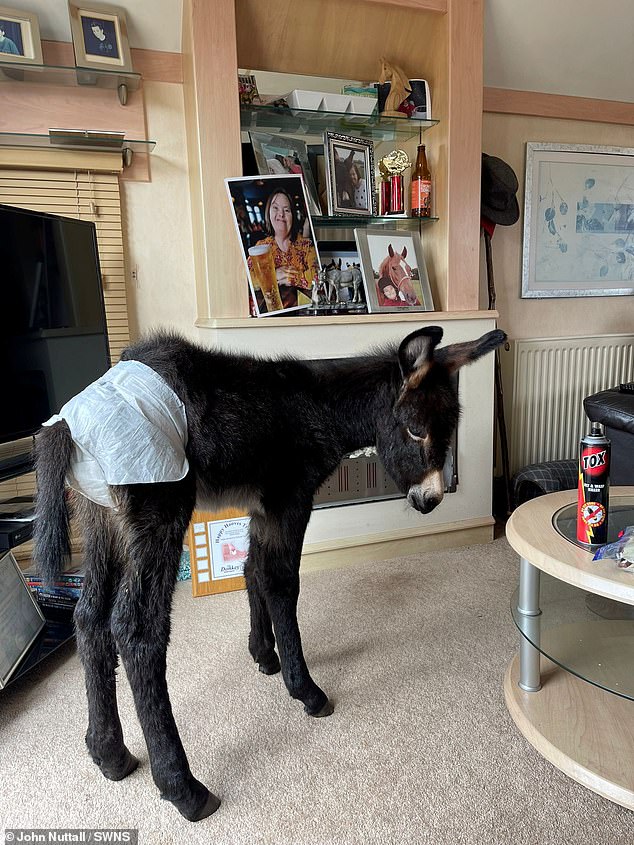 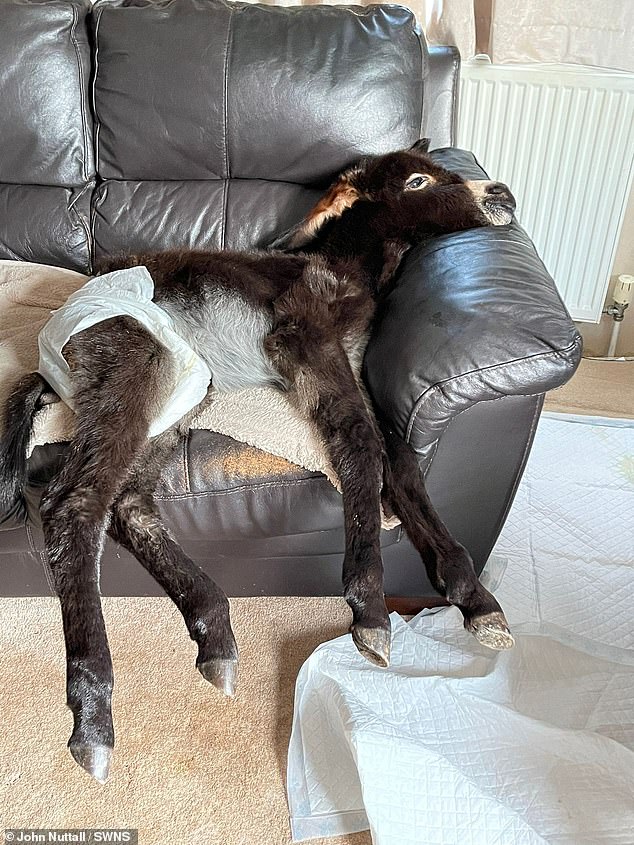 It’s a dog’s life: Kye sprawls out on the sofa at the home he shares with farmer John Nuttall

He said: ‘I kept him in the house, and then he used to go in the garden with the dogs, so he grew up with me and the dogs, really.

‘As I would whistle to the dogs, he now comes to a whistle.

‘He even started playing with a ball and everything, and now, I can go for a walk down the road, and he’ll follow me like a dog.’ 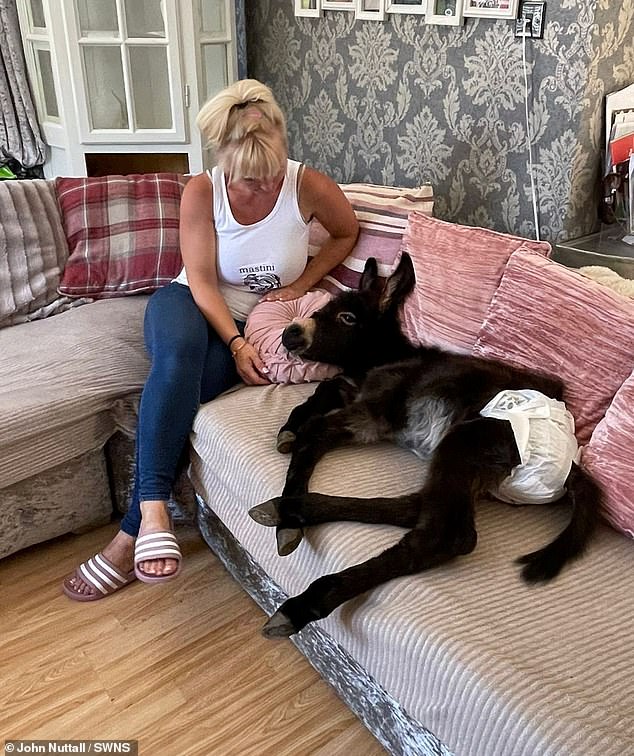 Four-legged friend: Kye the donkey enjoyed being pampered at home with Grazina Pervenis

John, who has 70 donkeys at his stud near the village of Ingoldmells, said little Kye had a tough start to his life after his mother turned on him and became violent.

He said: ‘The previous year, the mother gave birth to a foal that she wouldn’t take to, and it ended up dying.

‘We thought there was something medically wrong with the foal, so we tried again this year, but then she rejected this one, too.

‘I was lucky enough to be there when she was attacking him, and I managed to get him inside.’

Initially, John fed Kye with milk from his estranged mother to ensure that the small foal got the right nutrients he required as a youngster. 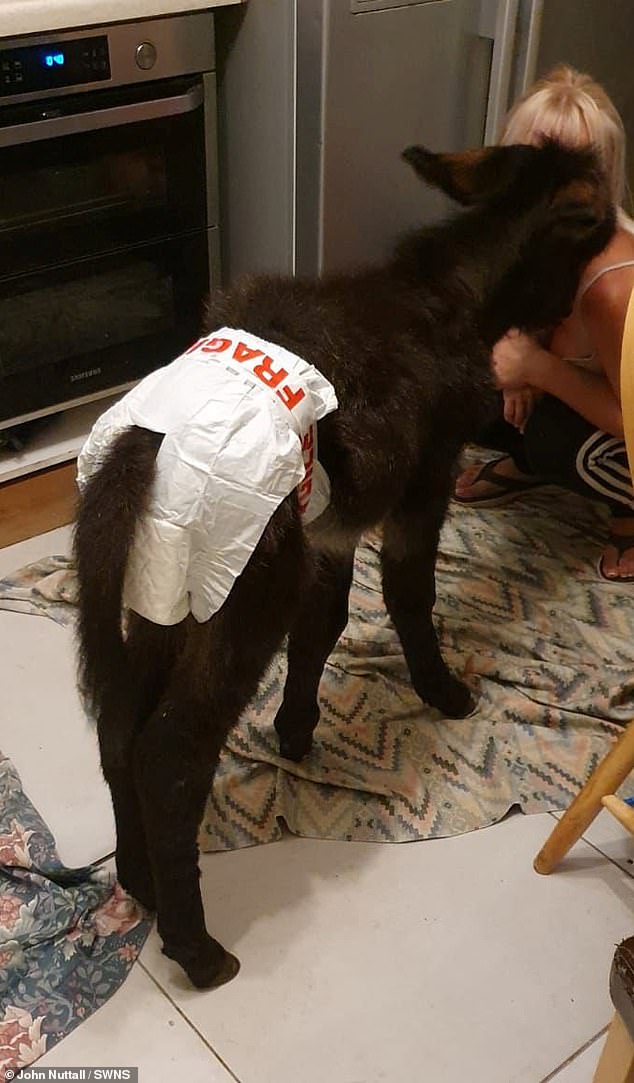 Puppy love: The couple cared for him until he was large enough to move into his own paddock

But after his health began to deteriorate, Grazina, his dog trainer and breeder partner, decided Kye needed a more hands-on approach and took him under her wing.

John said: ‘I still didn’t dare leave the foal in the stable with the mare, because she was hell-bent on hurting him.

‘Then he went downhill, so I got in touch with my partner, and she came down at midnight that evening and said: ‘Right, I’ve got to take the foal straight away.’

‘She put a tube up his nose and into his stomach and fed him with formula milk for orphan foals.

‘She kept him on that for two-to-three weeks. She was feeding him every hour at that time – she was like a zombie.’ 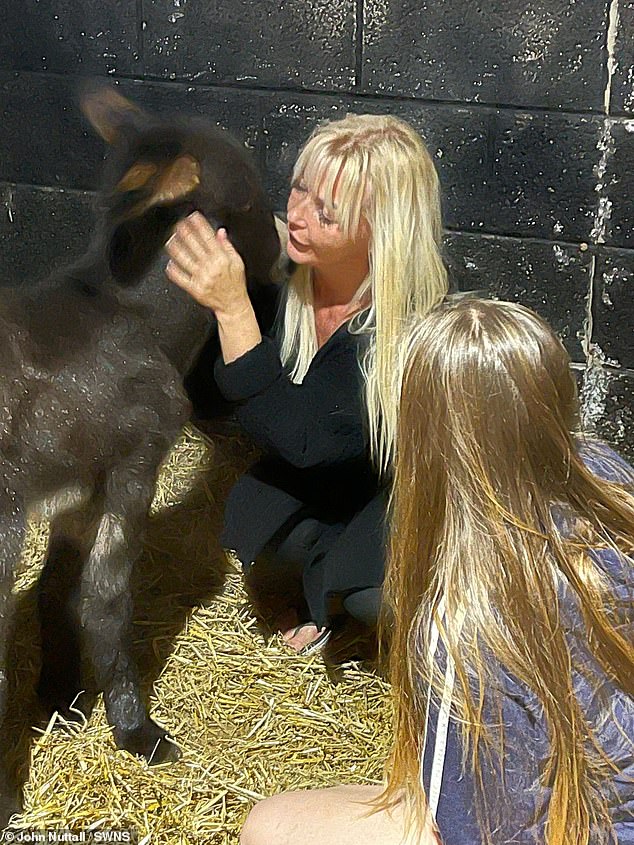 John said: ‘I went to the pet shop and bought the big dog nappies because you don’t want donkey baby poo all over the house.

‘We would also let him go outside, but I would fetch him back inside in the evening because he also needed human contact.’

During that time, John let Kye run around with his dogs as they were the right size for him, and it was there where he picked up some of their traits.

He said: ‘There was nothing I could really put him with that was his size, and I didn’t want him to get hit by other donkeys.

‘So he used to go out in the daytime in the garden with the dogs. I would whistle to the dogs, and so he comes to a whistle. 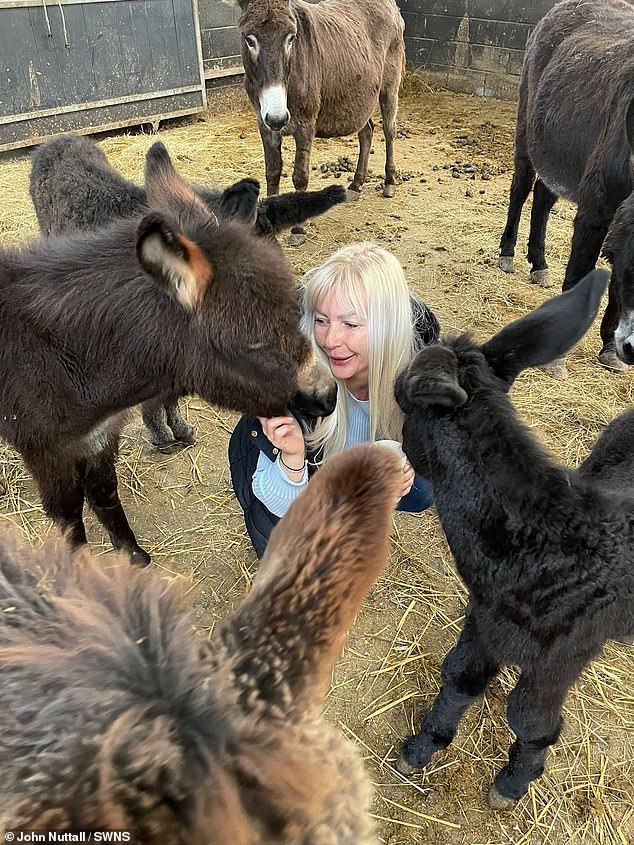 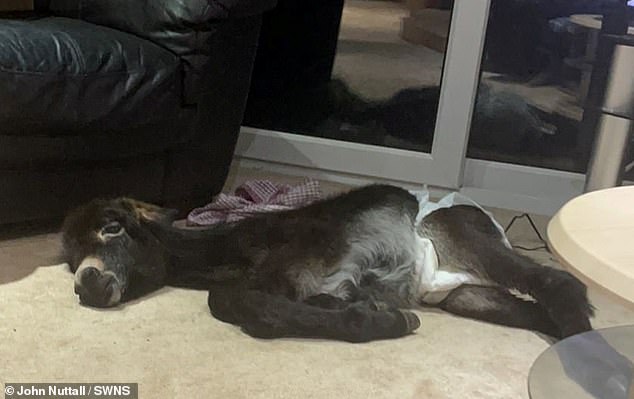 Just chilling out at home! Kye having a rest on the living room carpet, just like a pet dog would

‘Now, if I get in my van to go out, he’ll see it going and chase after the van. He’s certainly a character.

John hopes one day that Kye will join his other donkeys, which take visitors for rides on Skegness, Cleethorpes and Mablethorpe beaches each summer.

His family have run the tourist business for a century, with John’s three sons and  daughter becoming the fourth generation to become involved.

For now, he’s happy that little Kye, who moved into a paddock with other donkeys three weeks ago, is getting stronger each day.

John said: ‘He’s grown up. He’s got all his teeth, and he’s eating well. He’s a decent foal.

‘He’s going to live, but he’s not as strong as my other foals who are feeding off their natural mothers.

‘But he’s alive – that’s the main thing. My main concern was to keep him alive. I didn’t want to lose another one!’