In this column, we deliver hot (and cold) takes on pop culture, judging whether a subject is overrated or underrated.

It’s the most wonderful time of the year. You have your self-appointed party planner who’s organising the work Christmas party (not Greg after last year’s “incident”). While everyone’s throwing around ideas for The Best Night Ever, you know there’s going to be someone who suggests a boozy art night. They’re popping up everywhere: Brush and Bubbles, ArtBar, Champainting, Canvas and Cabernet, Picasso and Piss, Botticelli and Booze (I made the last two up).

The idea is pretty straightforward: drink alcohol and paint a picture, supervised by someone with art “accreditations.” So cultured. Why get drunk in a bar when you can live out your artistic dreams surrounded by people you hate at work, like Gemma, who’s been stealing manila folders for a year? “Here’s my chance,” you think. “People will finally see my true colours; that my creativity extends well beyond making a blu-tack Christopher Walken”. 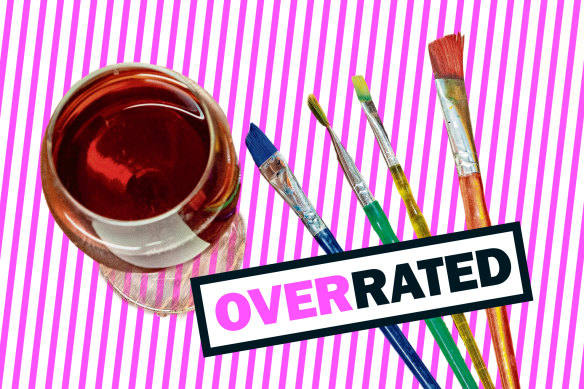 Picasso and Piss quickly turns into Rousseau and Regret.

The basic format is this: start drinking and then attempt to copy the instructor’s sunset/mountain/gorilla picture.

There are many things that shouldn’t be done under the influence. Attempting to compliment your co-worker Sarah’s gorilla that looks more like a self-portrait is one of them. Trying to distinguish between paint water and a glass of wine after half a bottle of Pinot Noir is another.

There’s nothing inherently wrong with the idea: it’s the marketing that gets my (badly painted) goat. The websites breathlessly proclaim, “Unleash your creativity!” “Colour your world!” “Get lost in the creative process”. Only $60 a ticket (BYO food and drink!)

Maybe it’s me, but surely you could have a cheaper night with a keg of beer, some butcher’s paper, and office supplies? Richard usually gets his kit off after a few beers anyway, so you don’t have to pay for a life model.

Alcohol makes most things fun: golf, playing cards, parenting, and your friend Rita, who thinks coffee-based cocktails are a bit risqué. It’s lazy to boost creativity with alcohol. There are far more creative ways to get creative. Why not take a leaf from some famous artists’ books? Do a Kandinsky and blast Wagner; nothing like Ride of the Valkyries to loosen up the creative juices. Or power nap like Salvador Dali, who would fall asleep in an armchair with a key in his hand over an upturned plate, waking from the key hitting the plate at the moment of sleep. Bam: surrealism at your fingertips (and if you’re lucky, you might end up sleeping through the whole work Christmas party).

Artist hacks aside, you’ll probably regret polishing off that second bottle of Chardonnay and go from Picasso and Paint to Nietzsche and Nurofen. Or Voltaire and Vomit. Rousseau and Regret. Hangovers are often accompanied by some amateur philosophising. Like, why do we even have work Christmas parties at all? You spend all week with people you’d never choose to socialise with, what’s the purpose of spending valuable leisure time with them where there’s no stationery cupboard to hide?

It’s just one of those adult responsibilities we all learn to bear, but at least normal post-Christmas party regret doesn’t involve an artefact of the night in question.

What to do with said painting when you sober up and realise that your sunset masterpiece looks more like the fallout from a nuclear holocaust? Do you pass it off as a Christmas gift to your Mum so she’ll quietly dispose of it? Or donate it to an op shop? Or hang it in the spare room out the back and pass it off as your five-year-old nephew’s artwork?

Maybe instead of the next team-building day from hell, you could suggest everyone bring their paintings in for some amateur art appreciation. Keep the inspiration flowing and tell your co-workers exactly what you think their unconscious desires are (except for Greg’s; everyone knows about his unconscious desires now).

Or why not scrub the canvas clean and start over with your own night: Bob Ross and Baileys. Be soothed by his calming, gentle voice as he paints happy little trees. Get your ASMR response triggered, rather than being triggered by Gemma, and watch all your mistakes turn into “happy accidents” with every glass.

To read more from Spectrum, visit our page here.

The Booklist is a weekly newsletter for book lovers from books editor Jason Steger. Get it delivered every Friday.

In case you missed it: the culture stories that start conversations

For decades depictions of sex in Hollywood have studiously avoided focussing on a woman’s actual sexual desires and pleasure. That is, until two female directors changed that this year.

Mildura, six hours drive north-west from Melbourne, is used to being overlooked. So, why did US band Kings of Leon choose this town – better known for its production of citrus fruits – to be the kick-off of their Australian tour? And how long did it take locals to realise this was not a practical joke?

Sunkissed, behind aviator shades, on a yacht with the Italian coastline behind, is Dominic West too handsome to play Prince Charles in the fifth season of The Crown? Fans definitely think so.