Many species may be much more vulnerable to climate change than researchers realise because of a focus on the point when animals and plants perish rather than when they stop reproducing.

That potential underestimation of the likely effects of a warming world is a key finding by an international team of scientists who examined 43 species of flies for tolerance to extreme heat. 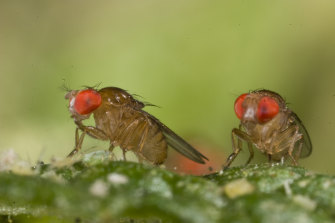 An image of one species of Drosophila, or small fruit flies. Experiments on such flies suggest scientists may be missing out on subtle effects of climate change that have much broader implications.Credit:Emily Walker

They found that almost half of the Drosophila, or small fruit flies, showed a delayed male fertility loss after heat stress, according to research published on Tuesday in Nature Climate Change journal. For about one-in-five of the species, fertility dropped 80 per cent immediately after the heat exposure.

The fly species, widely used around the world for a range of genetic and other scientific work, offer an insight often overlooked, the researchers said. Warmer temperatures don’t need to kill and knock a colony of bats out of a tree or to trigger mass coral bleaching to have a deleterious effect.

“Sublethal temperatures cause losses in fertility in plants, insects, fish, corals, birds and
mammals, including humans,” the researchers found.

“If the temperatures that cause infertility are often lower than critical thermal limits [that can kill individuals], we may both be generally underestimating organisms’ vulnerability to climate change and mis-identifying which organisms are most at risk,” they wrote.

Ary Hoffmann, a University of Melbourne scientist who was among the paper’s authors, said the researchers tested fly species because of the ease of breeding them in labs and the accumulated knowledge of their characteristics through decades of study.

“Fertility turns out to be really sensitive to heat stress for a high number of species,” Professor Hoffmann said. “It’s not the case of them falling off twigs – they are effectively not reproducing.” 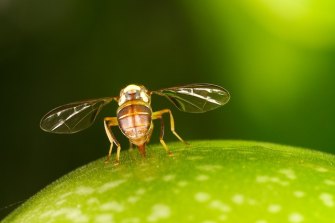 Fruit flies have been studied for a range of genetic and other issues. They may also help us understand how climate change is already affecting our wildlife – and ultimately us.

He said the effects being brought about by climate change were likely to be more subtle than most people realised, and indicate the need for longer-term studies that can detect fertility shifts. One big question will be which species have attributes that allow them to adapt or give them an edge over others, and which are vulnerable.

“We can go hide in an air-conditioned room, but most animals can’t,” Professor Hoffmann said.

The paper concluded that if the data for flies can be extrapolated to other organisms “then male fertility losses at high temperatures may be common, occurring at substantially lower temperatures than lethality”.

It noted a range of diverse species including some high-temperature adapted ones were already showing effects, although the data is limited so far.

“For instance, the zebra finch, a desert-dwelling organism with naturally high body temperature and good thermoregulation, shows substantial damage to sperm at temperatures it regularly experiences in nature,” the paper found.

“Our work emphasises that temperature-driven fertility losses may be a major threat to biodiversity during climate change,” it said. 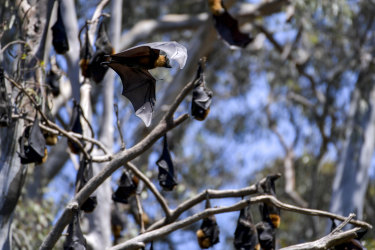 Grey-headed flying foxes are among species that show mass deaths can occur if temperatures rise above a certain level, such as 42 degrees for these mammals. Credit:Eddie Jim

University of Sydney biologist Francisco Sanchez-Bayo, whose research has identified widespread changes in insect populations globally, said the paper was “a very good study”. It highlighted how influences such as heat stress or pesticides affected reproduction without killing the insect.

He noted that while some species of insects would benefit from higher temperatures, the overall trend was likely to be negative.

“The number of species that are increasing in number is smaller than the number decreasing,” Dr Sanchez-Bayo said. “Overall, the balance is changing.”

A paper he co-wrote and published in Austral Entomology earlier this year found across 10 major insect orders, 37 per cent of insect species were declining and 18 per cent were increasing.

Climate change was an important driver along with pollution and the destruction of habitat, he said.

Science and health explained and analysed with a rigorous focus on the evidence. Examine is a weekly newsletter by science reporter Liam Mannix. Sign up to receive it every Tuesday.

Most Viewed in Environment