The Milwaukee Bucks on Wednesday chose to boycott Game 5 of their first-round playoff series against the Orlando Magic as a sign of protest following the police shooting of Jacob Blake, a 29-year-old Black man in Wisconsin. The NBA announced the two remaining games scheduled for Wednesday had been postponed in light of the Bucks’ boycott.

The league, in a statement, said three games — the Bucks vs. Magic, Houston Rockets vs. Oklahoma City Thunder and Los Angeles Lakers vs. Portland Trail Blazers — would be rescheduled at a later date.

Alex Lasry, the senior vice president of the Bucks, tweeted his support of the team’s decision.

“Some things are bigger than basketball,” he tweeted Wednesday. “The stand taken today by the players and org shows that we’re fed up. Enough is enough. Change needs to happen. I’m incredibly proud of our guys and we stand 100% behind our players ready to assist and bring about real change.”

Bucks point guard George Hill on Monday was one of several players to openly question if the NBA playoffs should continue in light of the shooting. “We can’t do anything [from Orlando],” Hill told the Undefeated’s Marc Spears on Monday. “First of all, we shouldn’t have even came to this damn place, to be honest. I think coming here just took all the focal points off what the issues are.”

The Bucks vs. Magic game was originally set to begin at 4 p.m. in Orlando, Florida, but the Bucks never even took the court for pregame warmups. The Magic were originally out on the court but returned to their locker room a few minutes before the scheduled tip-off. 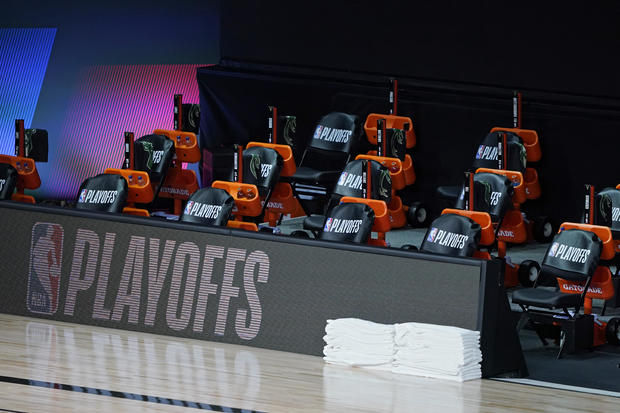 The referees stood on the court a little while longer before exiting, and photos of the game balls being packed up began circulating on social media. The television commentators for the game announced shortly after that the game was being boycotted.

Blake, 29, was shot multiple times in the back by police in Kenosha on Sunday, leaving him paralyzed, according to the family’s attorney. The shooting sparked protests in Kenosha and throughout the country, where many were still protesting following the killing of George Floyd in Minneapolis police custody.