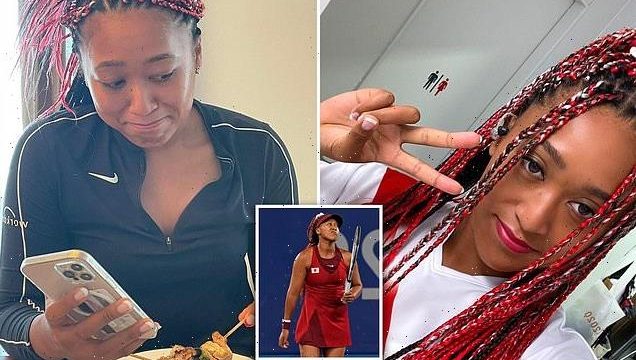 Tennis pro Naomi Osaka has returned to Instagram for the first time since her disappointing third-round defeat at the Olympics to offer a behind-the-scenes glimpse at her time in Tokyo.

The 23-year-old, who suffered a shock straight-set loss to the Czech Republic’s Marketa Vondrousova last month, posted a series of images and videos taken during the Olympics, however she declined to open up about the devastating defeat.

Osaka’s post, which was simply captioned ‘a Olympic collage’, began with a heavily made-up seflie that appears to have been taken on the day of the Opening Ceremony, during which the tennis pro was given the honor of lighting the Olympic torch.

In the snap, the sports star is modeling a bold pink lipstick, her Tokyo 2020 Torch Relay T-shirt, and bold red braids, while flashing a peace sign at the camera. 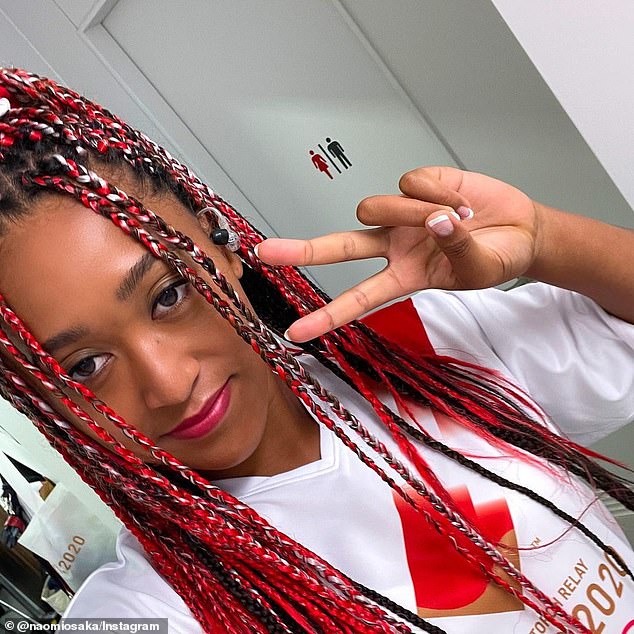 Say cheese: Tennis pro Naomi Osaka has returned to Instagram for the first time since her shock loss at the Olympics to share some behind-the-scenes photos from her time in Tokyo 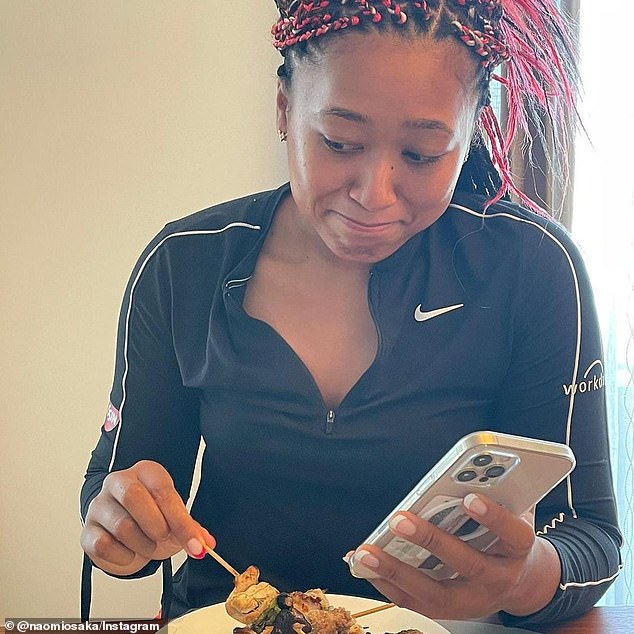 Yum: The 23-year-old suffered a shock defeat in the third round of the women’s singles tournament, having gone into the Olympics as the favorite to win gold 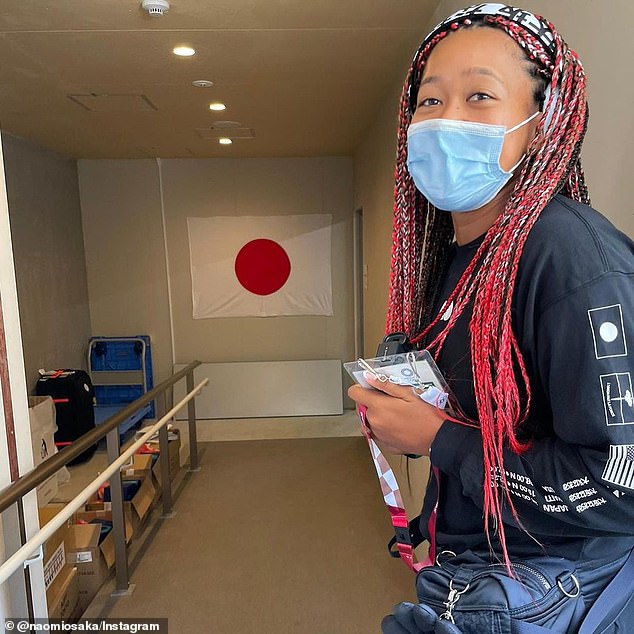 Pride: Osaka, who has a Japanese mother and a Haitian father, represented Japan at the Games and was given the honor of lighting the Olympic torch

Another candid snap in the carousel shows Osaka FaceTiming her dog at home – and she also included a photo of herself enjoying some local cuisine, while making a rather guilty-looking expression.

The tennis star did include one shot of herself during a match, but the majority of the images in the post focused on her free time away from the courts – of which she had much more than many people were expecting.

Osaka had gone into the Olympics as a favorite to win the gold medal, particularly after Serena Williams, one of her biggest rivals, made the decision to withdraw from the competition amid concerns over COVID-19 and athlete safety. 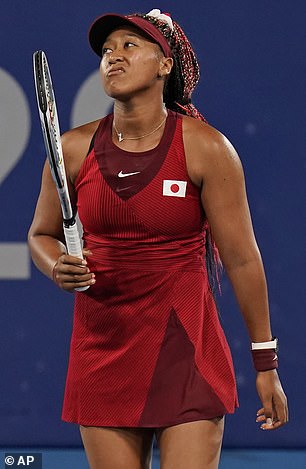 Upset: Following her third-round loss, Osaka admitted that she had struggled to cope with the pressure of the Olympics

Her medal dreams were quickly dashed however when she was beaten by Vondrousova in straight sets, with the Czech player hammering home her first 6-1 set win in just 24 minutes.

The Olympics marked Osaka’s first return to the court since she made the decision to drop out of both the French Open and Wimbledon because of struggles with her mental health.

Following the match, Osaka – who is ranked number two in the world and boasts four Grand Slam wins – admitted that the pressure of the Olympics, where she competed for Japan, had been too much for her to cope with, telling the media that ‘the scale of everything’ had been ‘a bit hard’ for her, particularly after the break she took.

‘I feel like I should be used to (the pressure) by now,’ she said. ‘But at the same time, the scale of everything has been a bit hard because of the break that I took. I am glad I didn’t lose in the first round at least.’

When a Japanese journalist then asked, ‘How do you feel?’ Osaka came close to tears. Unable to respond, she left the mixed zone, accompanied by her agent.

The tennis star has yet to offer any more details about the match and her thoughts on her disappointing performance at the Games, however she took a thinly-veiled swipe at her critics on Twitter in the days after the loss, writing: ‘Never let anyone’s opinions or comments influence how you view your own life and priorities.’

When it came to her Instagram post, Osaka kept things very light-hearted, sticking to candid snaps and shots of food, although she managed to sneak in a plug for her Netflix documentary, which was released last month.

The docu-series actually included some insight into Osaka’s decision to represent Japan at the Olympics – with the tennis pro opening up about the bitter backlash she faced in the wake of the announcement.

Osaka, who was born in Chūō-ku, Osaka to a Japanese mother and a Haitian father, was raised in the US but has been competing under the Japanese flag since she was a teenager.

But according to Osaka when it came to the Games, people were far more interested – and upset – by her decision to represent Japan.

In fact, the tennis pro says she was effectively told that her ‘black card was revoked’ after she revealed that she was choosing to represent her birth nation and not the US in the tournament.

‘I’ve been playing under the Japan flag since I was 14. It was never even a secret that I’m going to play for Japan for the Olympics,’ she says in the show.

‘I don’t choose America and suddenly people are like, “Your black card is revoked.” And it’s like, African American isn’t the only black, you know?’ she went on.

‘I don’t know, I feel like people really don’t know the difference between nationality and race because there’s a lot of black people in Brazil, but they’re Brazilian.’ 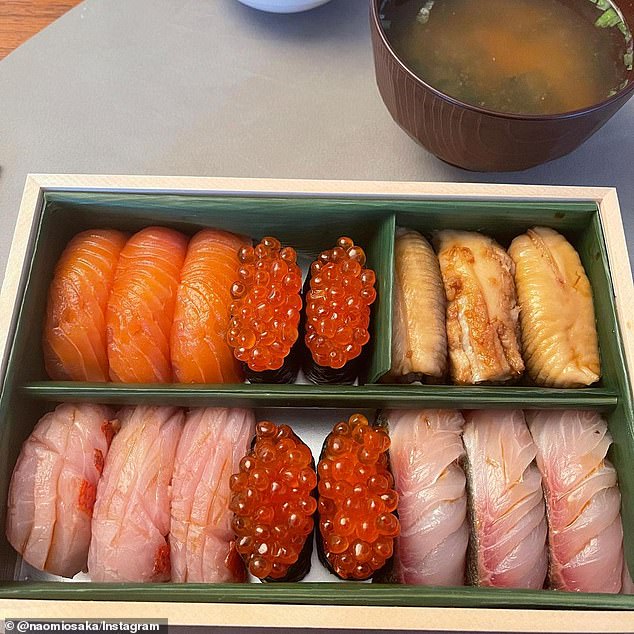 Eat up! She found time to indulge in some local delicacies while in Tokyo – where she had more free time than many expected 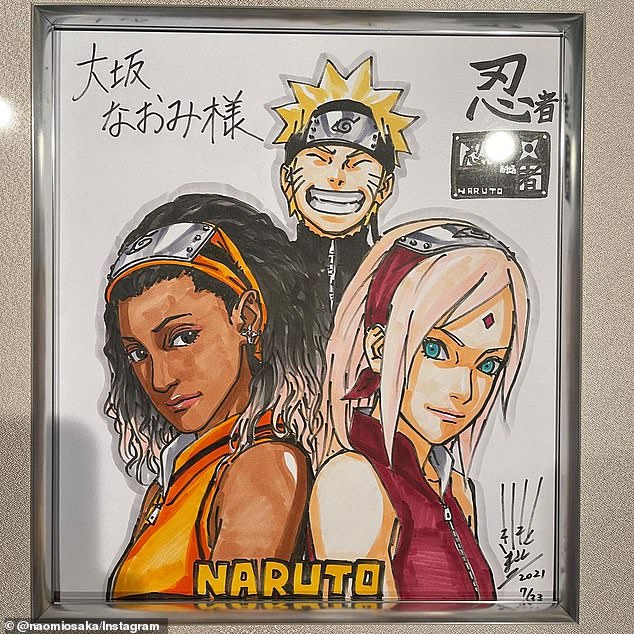 A gift? Osaka included a picture of what appeared to be some fan art in her carousel of images 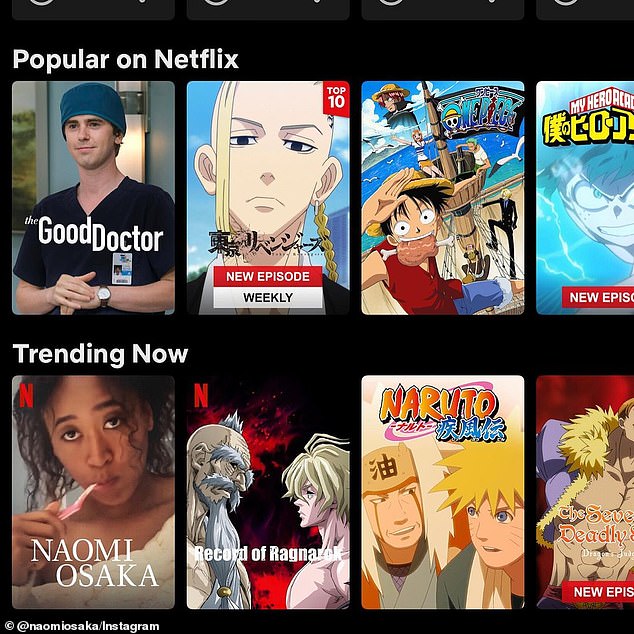 Hint hint: She also added a plug for her Netflix documentary, which was release last month

Naomi moved to New York from Japan at age three, but she has always chosen to represent Japan in any international competition, a decision that was made when she was still just a child.

Her mother, Tamaki, told the Wall Street Journal: ‘We made the decision that Naomi would represent Japan at an early age.

‘She was born in Osaka and was brought up in a household of Japanese and Haitian culture. Quite simply, Naomi and her sister Mari have always felt Japanese so that was our only rationale.

‘It was never a financially motivated decision nor were we ever swayed either way by any national federation,’ she added. 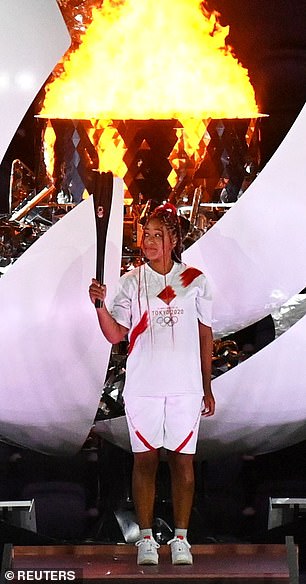 Special: The tennis player was hand-picked to light the Olympic torch in the Opening Ceremony in Tokyo

Plus, Naomi is no longer an American citizen. She retained dual American and Japanese citizenship for her entire childhood, but Japanese law mandates that anyone with dual citizenship born after 1985 must choose one by their 22nd birthday.

So ahead of turning 22 in 2019, Naomi publicly announced that she would be renouncing her US citizenship.

‘It is a special feeling to aim for the Olympics as a representative of Japan,’ she told Japanese broadcaster NHK. ‘I think that playing with the pride of the country will make me feel more emotional.’

As one of the country’s most successful athletes – and greatest hopes for a medal – Osaka was actually given the honor of lighting the Olympic torch at the Opening Ceremony, which came just one day before her first match of the tournament.

The Games marked the first major international tournament that Osaka has taken part in since she made the decision to pull out of the pull out of the French Open, following furious uproar over her refusal to fulfill any of her press commitments at Grand Slam competition.

At the time, Osaka cited her struggles with depression and anxiety, which she began dealing with after beating Serena Williams in the US Open final in 2018.

Osaka won the match 6-2, 6-4, but her victory was overshadowed by the controversy that erupted over Serena’s on-court arguments with chair umpire Carlos Ramos of Portugal, who issued her with a string of fines.

As a result of the on-court drama, Naomi found herself thrust into the center of a media frenzy and she has remained very much in the spotlight ever since.