A woman didn’t know she was pregnant until she went into labour.

While Stacey Porter was experiencing stomach cramps, she had no idea she was about to give birth on her bathroom floor.

The 20-year-old, didn’t have any pain relief or assistance when she delivered her “miracle” tot.

Even though parenthood was sprung on the Scottish woman and her partner, they seem to be adapting well to it.

Stacey, from Falkirk, was unaware she was carrying a baby for nine months.

Throughout her pregnancy, she continued to take the birth control pill and experienced regular periods.

As there were no warning signs, she drank alcohol and ate whatever she wanted.

She also took a trip to Thailand with her partner David over the Christmas period.

Stacey told the Daily Record: “I was just doing what I normally do. Not having a lot of wine but just when we went out for dinner and things.

“I had a bit of heartburn when I was away but I thought that was just the spicy food.

“It wasn’t until after giving birth that I found out babies with lots of hair give you heartburn.” 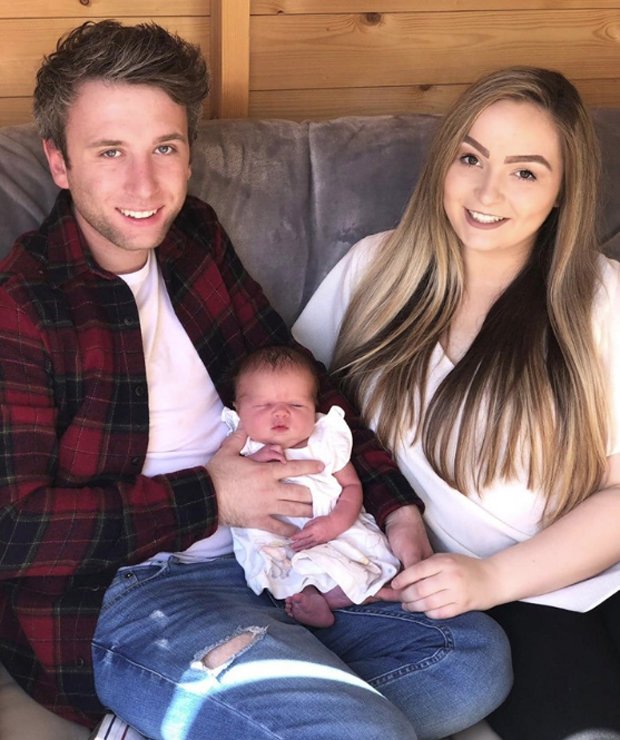 Following nine months of normality, the couple were understandably shocked when Stacey went into labour.

At around 4am, the mum rushed to the bathroom with bad stomach pain.

In a matter of minutes, she was giving birth on the floor.

She said: “It all happened so quickly.

Stacey’s partner David fell asleep on the sofa so didn’t wake up until after she had given birth.

He explained:  “I think I was woken up by screaming or crying…

“I didn’t have a clue what to do, I was all over the place.

“The paramedic told me to pack a bag but for some reason I was looking for clothes in the fridge.

“I still can’t explain the emotions I was going through at that moment.”

Following the birth of Sophia Grace Johnston on May 10, the parents have been taking time to adjust.

While they were completely unprepared for parenthood, they have been able to adapt.

The pair thanked their local paramedics for providing them with so much support.

Stacey added: “It’s a miracle that despite not knowing she was pregnant and living a normal life we have a healthy baby.”