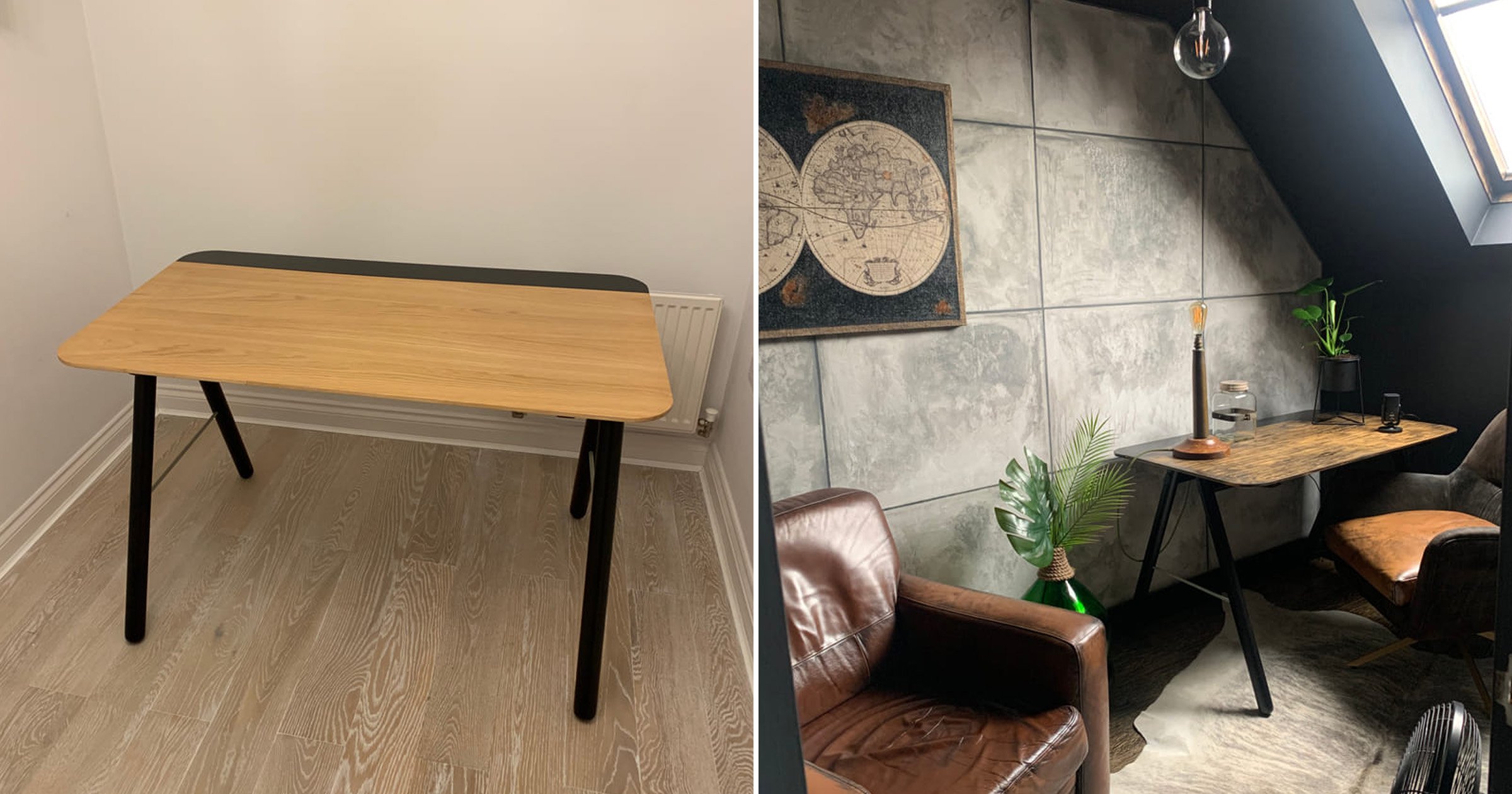 A creative mum has shared how she gave her office a rustic makeover for just £250.

Sharnene Jewell, 45, is a housekeeper and mum-of-four from Cardiff and managed to transform a plain bedroom into a stunning, vintage-inspired workroom.

To keep within budget, she bought all her furniture secondhand on Facebook Marketplace and upcycled everything from a wall canvas to a clock.

In addition to these cost saving moves, she also used clever painting techniques to do everything from giving the walls a concrete effect to painting the desk for a homespun feel.

She estimates the room would have cost in the region of £2,000 if she had paid full-price for everything.

Sharnene told money-saving Facebook group DIY On A Budget UK: ‘The room was originally my youngest daughter’s room, but she had an upgrade when my middle daughter moved out.

‘So we then decided to use the room as an office because my husband works from home a few days a week.

‘I started by drawing two to three-foot rectangles on the wall also leaving space for the faux grout.

‘I used a Tesco kitchen sponge, and matte grey emulsion paint with a bit of water to create the concrete effect and then I used matt black emulsion mixed with a bit of the grey for an off black colour for the faux grout.

‘I added a small amount of salt for a bit of texture.

‘I painted the rest of the room matte black.’

She continued: ‘The floor was whitewashed, but I wanted it darker, so I stained the white to brown and then scraped matte black floor paint into the grain.

‘I finished it off with clear matte yacht varnish.

‘The desk I bought second hand from Facebook Marketplace for £75, and it’s originally from Made.com. I sanded the top and applied satin black wood paint with a cloth for a rustic effect and I did the same effect on the window frame.’

She bought many of the room’s accessories from stores such as TK Maxx and The Range. These shops provided luxe additions without the hefty price tag.

‘The clock was from TK Maxx. It cost £8, and it was black originally. I painted it randomly with white paint and then applied teak wood stain to the white to create the rust effect,’ she explained.

‘The wall canvas was from The Range. I painted the outer edges black and then random areas with white and then I went over the white with teak wood stain for the rust effect.

‘It was originally orange, but was a little bit faded due to sun damage, so I dyed the fabric black, but not perfectly. I wanted a grungy look so I left some of the orange showing through.

‘The bullet lamp I bought from a boot sale and my husband re-wired it with the green fabric cord, then I just added an Edison style bulb.

‘The green vase is an old demijohn carboy, I bought that second hand for £5 from Facebook Marketplace. The top was slightly damaged, so I bought dial rope from B&Q, and attached it with a glue gun.

‘The tray that it sits on was from Matalan and so was the black plant pot on the desk. The rug was £60 secondhand from Facebook Marketplace, but is originally from IKEA. The glass sweet jar I bought from a boot sale for £2. The monstera plant was from Morrisons and the artificial leaves were from IKEA and Dunelm.

Sharnene added that looking at sites such as Facebook Marketplace and doing much of the work herself meant she could put a unique finish on the room.

‘I managed to put my own stamp on everything to make it more personal,’ she said.

‘I highly recommend upcycling, it gives me a feeling of accomplishment. I actually up-cycled the floor once before this time to a whitewash finish and then again for this look.

‘I couldn’t be happier with how it turned out and it was a lot less work than replacing it and obviously cost next to nothing to do.

‘I think the great thing about sourcing items secondhand, is that I don’t mind altering it to make it unique.’

If you want more tips and tricks on saving money, as well as chat about cash and alerts on deals and discounts, join our Facebook Group, Money Pot.