Political staffers want the Department of Finance to crack down on sexual harassment and bullying in Parliament House, asking for training for MPs and staff within months and a better reporting regime.

The public service union will put the updated requests to be included in a new enterprise agreement to the department in a meeting on Friday. It’s the second bargaining round since staffers emphatically rejected a low pay offer in a vote held the week before Christmas. 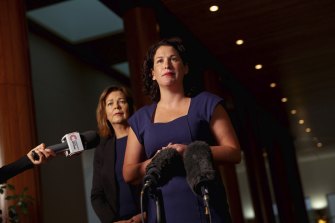 Sex Discrimination Commissioner Kate Jenkins is conducting a review of the culture of Parliament House and political workplaces after former Liberal staffer Brittany Higgins went public with allegations she was raped in a ministerial office in March 2019. Since Ms Higgins spoke out, many other advisers have spoken about their own experiences with bullying and harassment.

“It is critical that the government acts to include this claim in the MoPS [Members of Parliament Staff] agreement, which will be voted on in the next few months. It will provide much-needed protection for workers while we await the findings of the Jenkins review that is set to report until November,” she told this masthead.

The CPSU met with Ms Jenkins last week as well as staff from all areas of Parliament, not just political offices.

The government anticipates many of the requests will be met in the near future independently of the enterprise bargaining process.

Finance Minister Simon Birmingham pointed to the work deputy secretary of the Prime Minister’s department Stephanie Foster is doing to establish an independent complaints process. That is expected to be finished within the next month.

“We expect these interim processes will be introduced well before the finalisation of the independent review being conducted by Sex Discrimination Commissioner Kate Jenkins which is expected to recommend further measures to ensure a safer and more respectful parliamentary workplace,” Senator Birmingham said.

“As is always the case, the government is committed to hearing and discussing key issues, including those related to workplace safety, with all representatives as part of the ongoing bargaining process.”

The claim to be discussed on Friday asks the department to commit to developing an action plan within six months that includes mandatory training on sexual harassment for MPs and senators and their senior staff and proper induction training for new staff. It also asks for better communication on how staff can report incidents, including for posters to be displayed around Parliament House.

It spells out a definition of sexual harassment that includes verbal abuse, offensive language and images, stalking, rude gestures and sexual assault or rape.

The clause is similar to one the CPSU put forward during negotiations before the no vote, which the department rejected.

“CPSU members have raised workplace violence issues at every workplace health and safety meeting over the last two years, and this government has rejected every policy and plan workers have recommended, saying it was impossible and that this is a special workplace,” Ms Donnelly said.

“Let’s be clear, every employer, even government ministers, have a legal responsibility to provide a safe and respectful workplace.”

The new agreement is likely to go to a vote late in April.