A proposal to let those fleeing domestic violence to access their superannuation funds early has been scrapped by the Morrison government after widespread concerns about the possibility of financial abuse.

Minister for Women Marise Payne said on Monday night during Senate estimates that stakeholders had raised concerns the measure would disproportionately affect victims and survivors of domestic violence and it would be difficult to provide access and ensure appropriate protections were in place to avoid coercion. 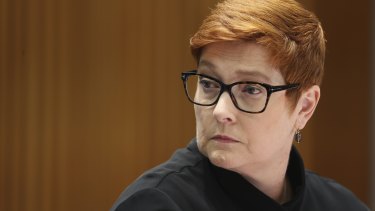 Minister for Women Marise Payne says a proposal to allow women leaving violent relationships to access their super has been scrapped.Credit:Alex Ellinghausen

Senator Payne said the scheme would no longer be pursued given there may be a heightened risk of financial abuse.

Superannuation Minister Jane Hume last week told The Sydney Morning Herald and The Age the initiative, which was first unveiled in the 2018 Women’s Economic Security Statement, would see action in a matter of weeks alongside extra data sharing between courts and the tax office to reveal retirement balances during divorce proceedings.

The changes would have given victims fleeing their abusers the ability to withdraw up to $10,000 from their superannuation accounts “as an important last resort lifeline”.

Senator Hume said the exposure draft would provide a generous timeframe to receive feedback from stakeholders and representative groups and safeguards would be put in place to reduce the chances of the scheme being used for financial exploitation.

But Prime Minister Scott Morrison said the idea was under “review” within days of it becoming public due to “strong concerns” about the measure from groups across the country.

Under existing rules people can get permission from the Tax Office to access their super before retirement age under existing “compassionate grounds” access, which is available for some medical treatments and palliative care. Expanding the scheme has been met by fierce criticism from domestic violence groups, Labor and the Australian Council of Trade Unions.

Labor superannuation spokesman Stephen Jones has been critical of the scheme, saying it is not the purpose of super and those facing family violence should not be required to undermine their retirement.

Senator Jenny McAllister said the concerns raised over the past week were the same as those flagged in 2018. “The government needs to explain why it’s taken them three years to realise that women shouldn’t have to choose between leaving a violent relationship and security in retirement,” she said.

She has previously recommended the government invest more in housing for those leaving their home due to domestic violence and provide more funding in the form of frontline services and paid domestic violence leave.