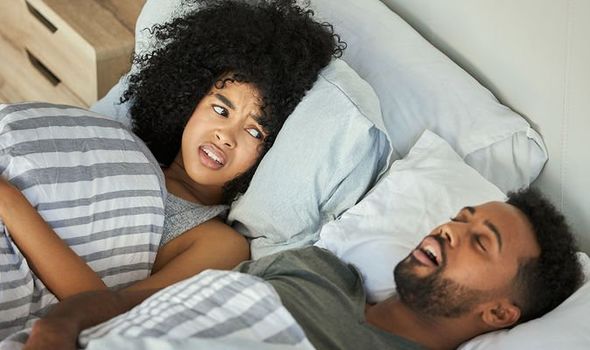 More than a quarter regularly face kicks under the covers from their partner in a bid to get them to stop snoring, while 13 percent said it had led to rows with their other half. But one in 10 admitted it had had such an impact on their relationship that they have delayed moving in with someone or even been dumped as a result.

The poll of 2,000 adults who snore also found 46 percent feel ‘embarrassed’ by it, with more than one in 10 dreading spending a night with a new partner.

Nearly a fifth (19 percent) have avoided sharing a room with a friend on holiday and 12 percent have dodged public transport in case they fall asleep and start snoring.

Steve Smith, spokesperson for nasal dilator Mute Snoring, which commissioned the research said: “Thousands of us are very embarrassed by our snoring and will try anything to stop it.

“While it may be amusing to some, it can have a huge impact on your life – whether you are the snorer, or a person living with a snorer.

“Relationships can really struggle if one person – or even both – snore, as the results show.

“You may think of it as being something that only affects you and your partner, but for those who feel embarrassed, it also impacts their holiday choices and even whether they travel on public transport.”

The study also found that three quarters of snorers only discovered they had the issue after being told by another person – although 17 percent realised when they woke themselves up.

Nearly 30 percent have had someone complain they could hear them through the walls, and an embarrassed 22 percent have even had their snoring recorded by a friend or partner.

A fifth admitted their snoring affects their relationships while more than one in 10 said it impacts their confidence (14 percent) and day-to-day lives (12 percent).

More than one in 20 (eight percent) even went as far as to say it affects their mental health.

As a result, more than half have tried different methods to try and stop snoring with lying on their side, raising their head with more pillows, and losing weight among the top ways.

Nearly one in 10 of those polled via OnePoll have even spoken to a doctor or health professional.

Steve Smith added: “Although there are many reasons why someone may snore, finding the right solution will often involve freeing up the airways.

“A nasal dilator helps to reduce the severity of snoring by opening nasal passages.”