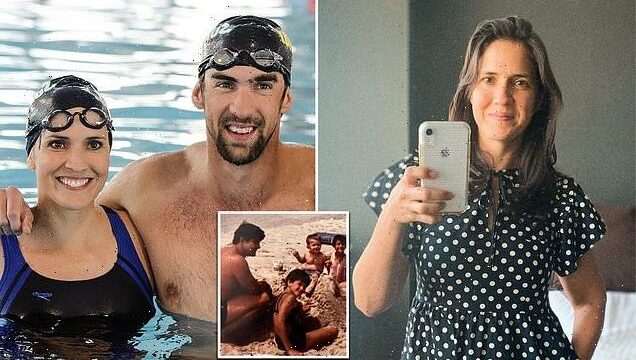 Decorated Olympian Michael Phelps’ sister Hilary has opened up for the first time about her lengthy battle with alcoholism, while celebrating 15 years of sobriety.

The 44-year-old public relations professional and mom, who lives in Washington, D.C., revealed to TODAY that she started drinking at 14 and described herself as a ‘volatile and dramatic’ drunk, adding she was lucky she didn’t ‘end up dead in a ditch.’

‘There were so many rock bottoms,’ Hilary, who shares five-year-old son Alexander with her ex-husband, said.

‘I’d be hungover every day at work and just sitting there trying to keep my head up. I had pain in my kidneys. My body physically hurt.’ 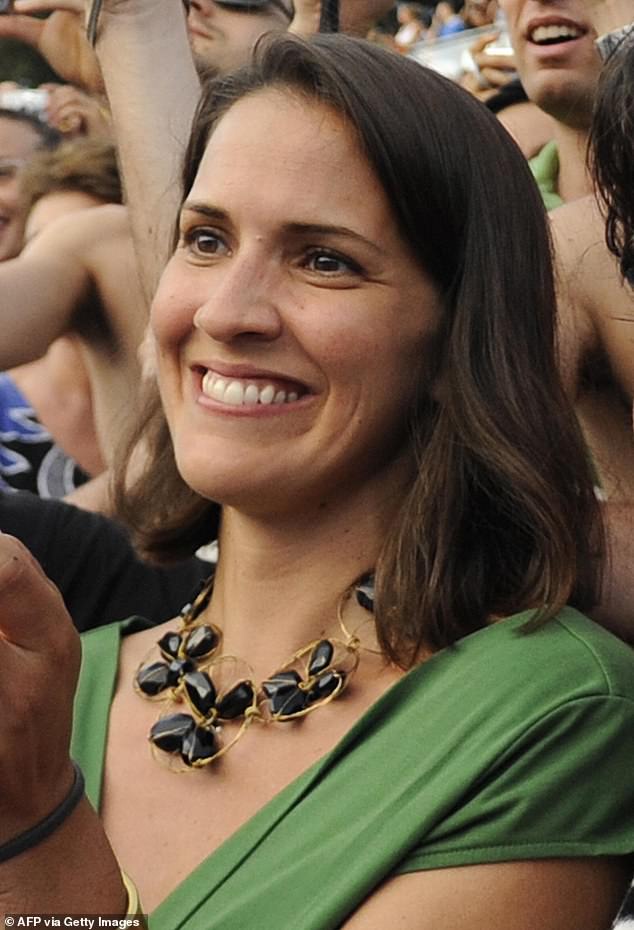 Hilary Phelps, the sister of the most decorated Olympic athlete, Michael Phelps, has spoken out about her battle of alcoholism after 15 years of being sober. She’s pictured here in 2009 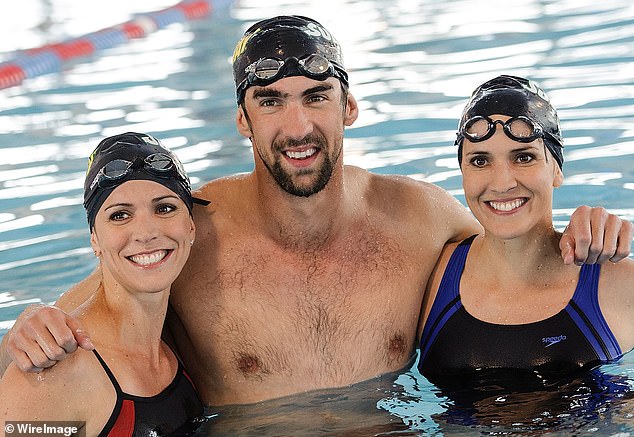 Hilary (right) with her siblings, Whitney (left) and Michael (centre) in 2012

Hilary was a straight-A student and had already seen a success in the pool (she was the fastest swimmer in the country by the time she was in sixth grade) when she had her first drink at 14.

‘Getting drunk was a way to kind of quiet those voices. It numbed that pain.’

Eventually she swam Division 1 at Richmond University, but her excessive drinking impacted on her performance as an athlete.

‘I was a blackout drinker… especially in college,’ she recently told The Payoff With Pete podcast.

‘I would run in heels… you know how girls dress up to go out on a Friday night, like you wore heels and I’d run and I’d fall, and I’d wake up with bruises and cuts all over my legs. 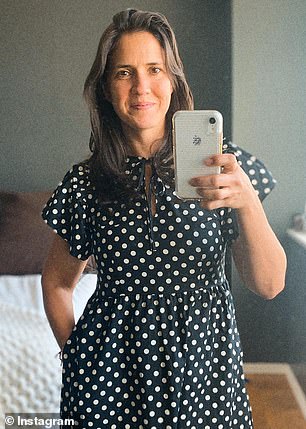 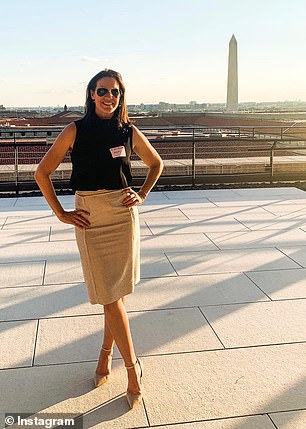 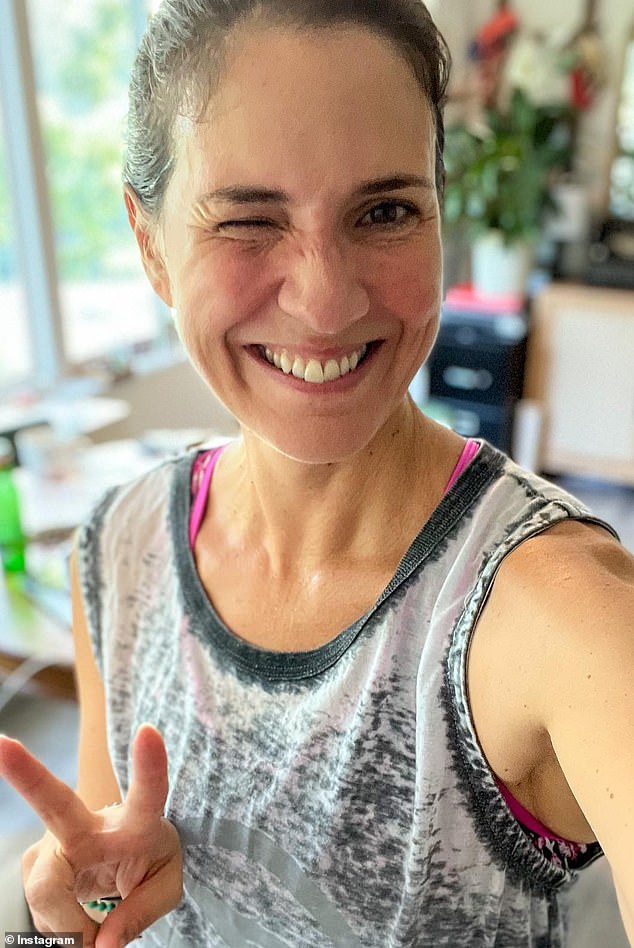 Eventually she swam Division 1 at Richmond University, but her excessive drinking impacted on her performance as an athlete 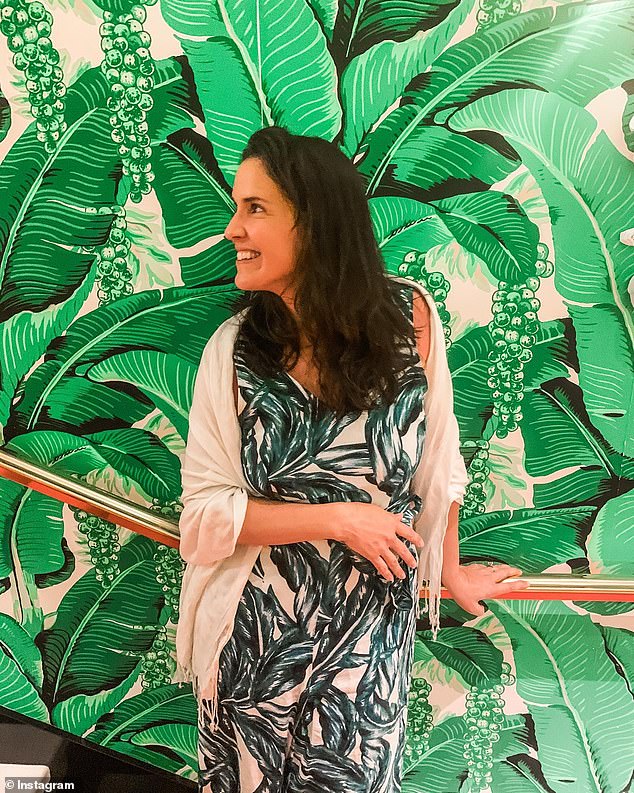 When she was on the booze, Hilary said she was ‘mess’ and she ‘just didn’t give a s**t about anything but drinking’

‘The sad part was that continued into my 20s, eventually it’s not funny when you’re 28.’

When she was on the booze, Hilary said she was ‘mess’ and she ‘just didn’t give a s**t about anything but drinking.’ 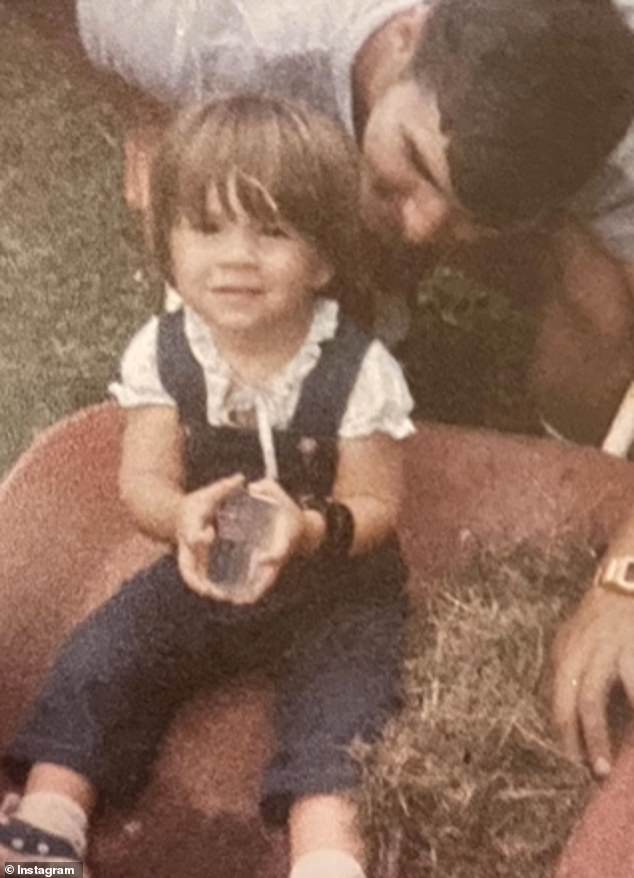 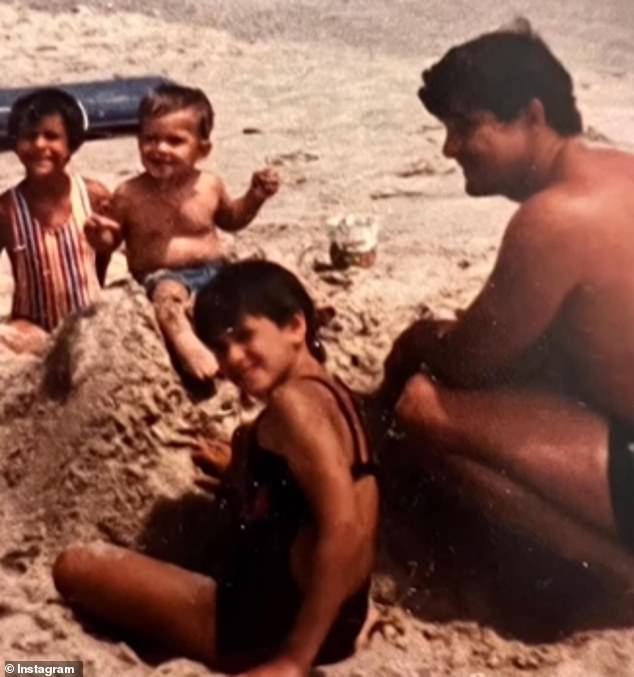 ‘When I was sober, when I wasn’t drinking… I’d care, I’d be kind and then drinking started… all bets were off,’ she told the podcast. ‘I was all about myself.’

After college, Hilary said she found herself in dysfunctional relationships.

‘One [partner] was smoking marijuana all the time as much as I was drinking. He was smoking weed, we didn’t talk… it was like just existing,’ she said.

‘I was like, “Cool… this person’s not going to judge me for getting hammered every night.”’

At one point, Hilary said she was drinking two glasses ‘filled to the top’ a day. 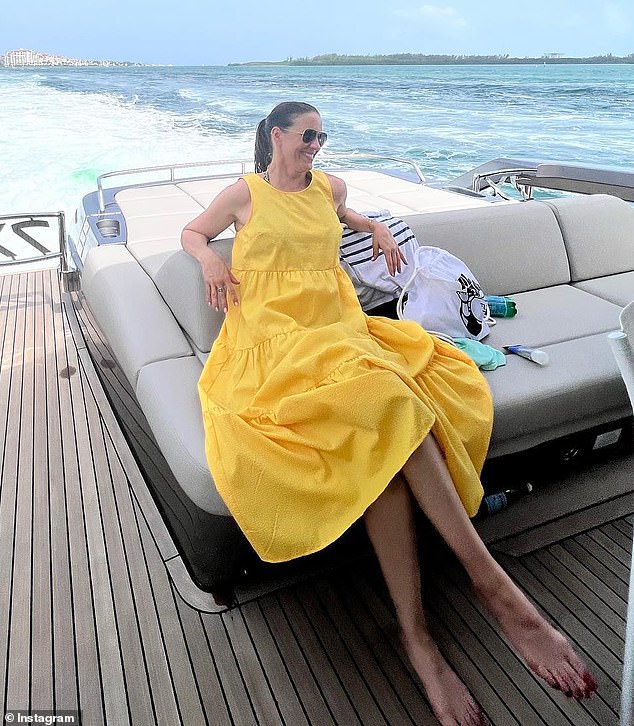 After college, Hilary said she found herself in dysfunctional relationships 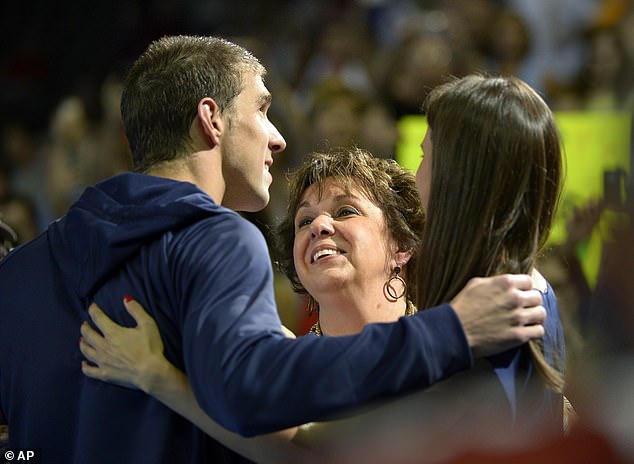 Michael (left) celebrates with mother Debbie and sister Hilary after the medal ceremony for the men’s 200-meter individual medley at the U.S. Olympic swimming trials in 2012 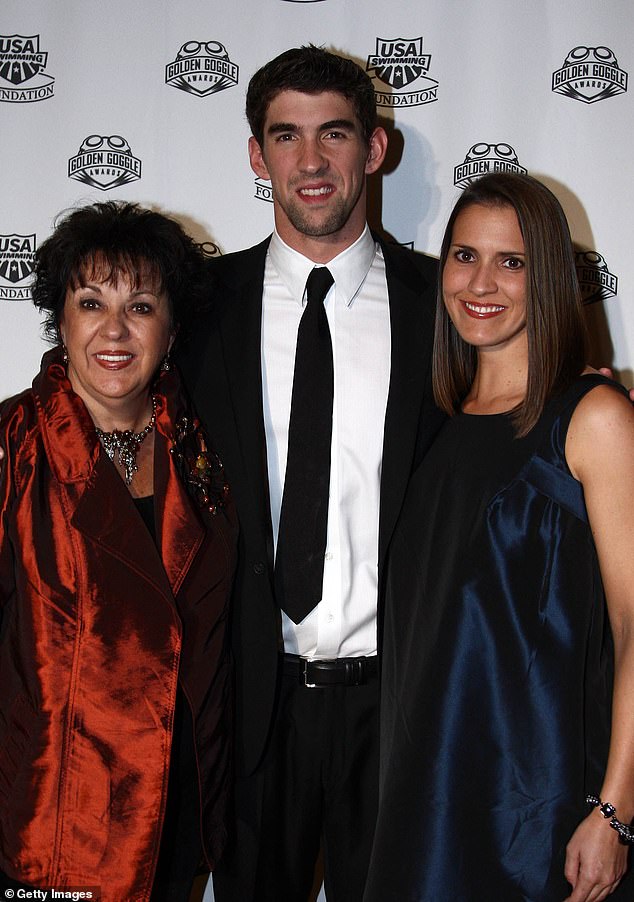 When she was living in Laurel, between Baltimore and Washington, she would keep her coffee cup from her morning train commute and then use it to drink bottles of wine on the return trip.

‘I would drink coffee in the morning and then I’d go to work and at Union Station in DC… there used to be a liquor store and I would two bottles of the little [single-serve] wine,’ she said.

‘I would go in the bathroom and wash my cup out… pour the two bottles of wine in and drink that on the way home,’ she said.

Hilary said she would then go back to her apartment and drink more wine at home.

It wasn’t until 2007 that she decided to go to a treatment center to get sober.

Her battle with alcoholism was something she had kept to herself, telling TODAY: ‘Nobody knew. It was my secret.’

In an Instagram post in 2022, she finally revealed her struggles: ‘As we kick off Mental Health Awareness month, I want to share something and be vulnerable.

‘In June 2007, I voluntarily walked into a treatment center and asked for help. I was scared, I felt alone and I didn’t know what to do, but I couldn’t stop drinking. My inner light was burned out and I had lost every bit of who I was. It truly felt like a dark night of the soul. 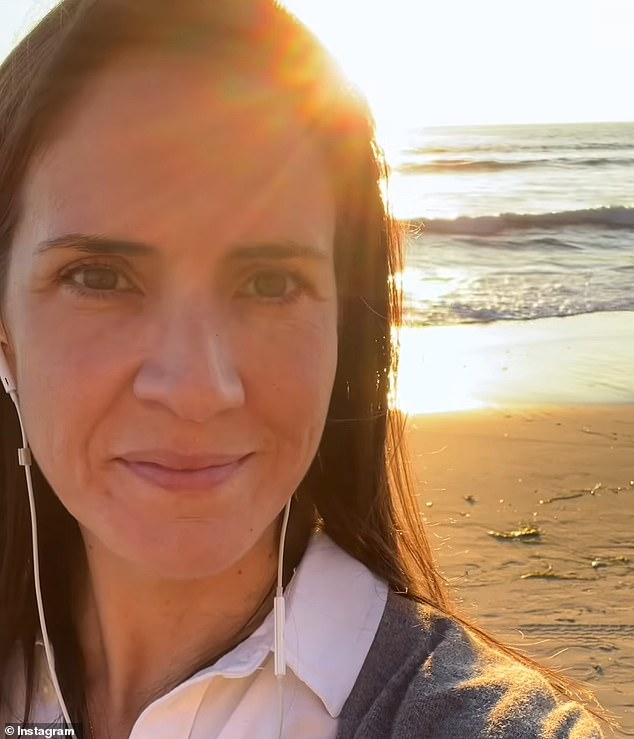 At one point, Hilary said she was drinking two glasses ‘filled to the top’ a day

‘Many people reading this will have no idea. It’s something I’ve kept hidden for fear of not being liked or accepted by my peers.

‘I was always worried that people would judge me, but I recently realized those are not my people. My person is the one person that sees or hears this and asks for help.

‘It’s been almost 15 years since my last drink. My choices are better. My life is better. Asking for help isn’t weak, it’s the strongest thing I ever did. I’m grateful to all of those who came before me, to those who loved me when I was at my lowest and cheered me on when I celebrated milestones.’

Hilary told TODAY she was grateful for Alcoholics Anonymous (AA) for saving her life, and it gave her new tools to cope with her alcoholism.

‘I pictured this sad room filled with creepy men in trench coats, but meetings are wonderful. You hear these crazy stories, and then there are huge successes and joys,’ she said.

‘I’ve never laughed harder than I do in 12-step meetings because everyone is just real and honest and vulnerable.’

Hilary also said she would go to AA meetings and hear women talking about the ‘shame they feel for needing help,’ a feeling she herself had struggled with until she broke her silence last year. 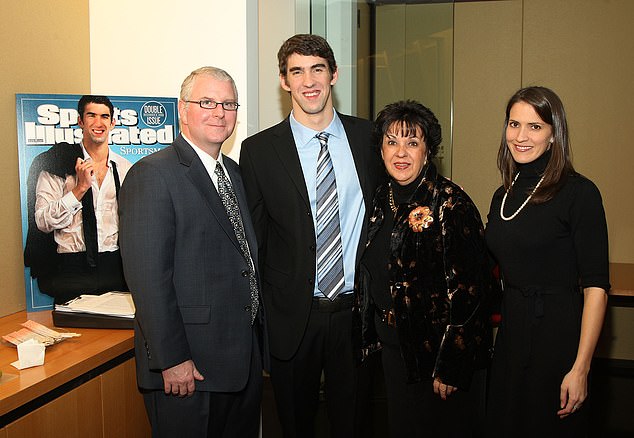 Hilary’s brother Michael, 37, has previously spoken about his own battle with alcohol abuse.

The 28-time medal winner opened up about his struggle with alcohol, which led to two DUIs, during a 2016 interview in TODAY.

But it was the affect his drinking had on his loved ones that really brought it home.

‘I think my mom was happy that I was alive because I think she saw the path I was going down,’ Michael, then 30, said of his mother, Debbie.

‘I think a lot of people close to me saw it. And I was going fast. Fast. Honestly, at one point I felt like I didn’t want to see another day.’

Michael underwent 45 days of inpatient treatment, enrolled in AA, and decided that he needed to get drinking out of his life, at least in the short term.

In a previous interview with USA Today, he seemed to blame an absent father, and friends and family who wanted him to be as ‘engaged in his personal life’ as he was in his career for his problems.

He said he used alcohol to push it all to the back of his mind.

Alcoholism is the most severe form of alcohol abuse and involves the inability to manage drinking habits.

It is organized into three categories: mild, moderate and severe. Each category has various symptoms and can cause harmful side effects.

If left untreated, any type of alcohol abuse can spiral out of control.

Individuals struggling with alcoholism often feel as though they cannot function normally without alcohol.

This can lead to a wide range of issues and impact professional goals, personal matters, relationships and overall health.

Sometimes the warning signs of alcohol abuse are very noticeable. Other times, they can take longer to surface.

When alcohol addiction is discovered in its early stages, the chance for a successful recovery increases significantly.

Common signs of alcoholism include:

For instance, drinking can impact your reaction time, causing you to have slow reflexes and coordination.

That’s why drinking and driving is extremely dangerous. Getting behind the wheel of a car can alter your perception of speed and distance, putting yourself and others at risk.

Additionally, consuming too much alcohol can affect your long-term health. Some side effects may lay dormant for years before they surface.

Because of this, professional medical care is required for proper diagnosis and treatment.

There are different forms of treatment available based on frequency and severity of alcohol abuse.

Recovering from alcohol addiction is a process that continues long after rehab.

It takes commitment to practice and apply the techniques you learn in rehab, counseling, support groups and other types of therapy.

Although every individual will have their own recovery plan that’s tailored to their specific needs, treatment generally follows a structure.

Alcohol treatment is broken into three sections, consisting of:

The first stage in alcohol addiction recovery is detoxification. This phase should be completed with the help of medical professionals due to the potential for serious, uncomfortable withdrawal symptoms. Many times, individuals are given a medication to help alleviate the painful side effects of a withdrawal.

There are two types of rehabilitation that help treat alcoholism: inpatient rehab and outpatient rehab. Inpatient rehabs are intensive treatment programs that require you to check into a facility for a certain period of time, usually 30, 60 or 90 days. Outpatient rehab allows individuals to participate in a recovery program while continuing with their daily life. Talk with your doctor about treatment options to determine which form of recovery will best fit your needs.

The recovery process doesn’t end with the completion of rehab. Long-term sobriety requires ongoing therapy and may entail support groups, counseling and other recovery resources. These will make sure you maintain sobriety and continue on a happy, healthy path for months and years to come.