A new rail bridge that is set to form part of the Melbourne Airport Rail project will soar 55 metres above the Maribyrnong River and become the second-highest bridge in Victoria after the West Gate.

Transport Infrastructure Minister Jacinta Allan released an update on the project on Monday.

The plans will also see elevated rail built through some residential areas, including Sunshine, where the recently rebuilt railway station will undergo another major renovation to turn it into a regional interchange for both airport rail and for train services to growth areas and regional Victoria.

The final cost of the project is yet to be finalised, but it will be built with $5 billion of money from the Victorian budget and $5 billion from Canberra.

A business case for the project has also not yet been completed, but the government intends to run airport trains along the Metro Tunnel rail line through central Melbourne, attracting some criticism from transport experts because it will reduce the number of metropolitan trains that can use the $12 billion tunnel when it opens in 2025.

A rail line to Tullamarine has been on Victoria's infrastructure agenda since the mid-1960s but has never been delivered.

The original plan was for the track to run via Broadmeadows, rather than the more circuitous journey through Sunshine, but with far more housing along the Broadmeadows corridor to be potentially affected by a new express airport rail line, in 2001 a state government planning panel recommended the new route via Sunshine.

That report estimated an airport rail link would cost between $213 million and $516 million. The current official estimate for the project stands at $8 billion to 13 billion, although it is not clear precisely what this budget includes.

Construction of the airport rail link will start in 2022 and finish by 2029, delivering train services to the city every 10 minutes.

Airport trains will run through the new Metro Tunnel and into the south-eastern suburbs via the Cranbourne and Pakenham lines. The government has promised the new rail link will provide a direct connection from the CBD to the airport in under 30 minutes. 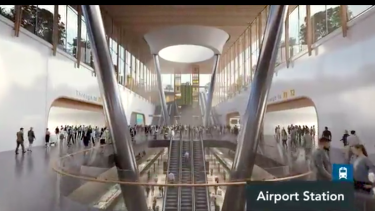 The route via Sunshine and the Metro Tunnel "is the best solution – it means the quickest trip, with the least number of interchanges for the majority of passengers", Ms Allan said.

The journey to the airport will stop at Footscray, to connect to the Werribee and Williamstown lines, and Sunshine to connect to Ballarat, Bendigo and Geelong lines, before arriving at Melbourne Airport.

Moonee Valley Council is also campaigning for the rail project to include a new station at Airport West to ease a transport black hole in the city's north west.

The location of the railway station within Melbourne Airport has not yet been confirmed.

"Melbourne Airport Rail is a massive engineering project and our experts are taking the time to consult with the community, carefully consider the works required, and work out the best way to deliver them," Ms Allan said.

The Public Transport Users Association is broadly supportive of the airport rail link plan, but spokesman Daniel Bowen said when the details of the project were finalised, it was crucial tickets were affordable.

He said the current SkyBus made sense to catch if you were travelling alone. "But if you're travelling in a group of people, then the cost really goes up and a taxi will be cheaper."

"Fares will need to be lower for airport workers if they really want to reduce the traffic pressures," he said.