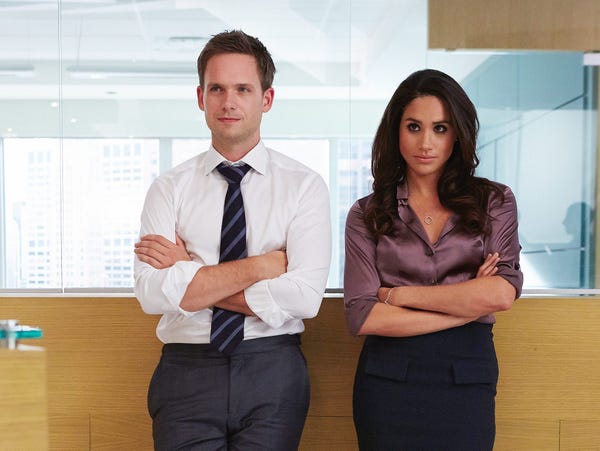 Patrick Adams said "pure fear" is stopping him from reaching out to his former "Suits" costar Meghan Markle.

Adams, who attended the Duchess of Sussex's royal wedding to Prince Harry in 2018, starred alongside Markle for seven seasons of the hit legal drama series before she resigned to become a full-time royal.

Speaking about Markle in an interview in this week's Radio Times, Adams said the pair exchanged text messages when their children were born, but now he feels "intimidated" to rekindle their friendship.

"Quite frankly, I think I'm intimidated," Adams said, according to the Mail Online.

"I have no doubt I could pick up the phone and call her at any moment, but I don't know what I would say.

"After our children were born, there were some texts sent and gifts sent, but I guess I'm a little scared. I think it's pure fear.

"I guess I'm scared about the idea of breaking through whatever walls exist to have that conversation," he added.

"We've spoken and texted a couple of times, but Meghan's life is incredibly full and she's been navigating a lot," Adams said.

"We don't spend any time together, but that's not because of anything other than how completely enormous her life has become in so many ways."

Markle and Adams exited the show together in 2018, as their characters Rachel Zane and Mike Ross got married and moved to Seattle to set up their own law clinic.

Adams and his wife, "Pretty Little Liars" actress Troian Bellisario, welcomed their first child Aurora in 2018, just a year before the arrival of Markle and Prince Harry's first child, Archie.

In another interview on Friday, Adams defended the duchess after she faced criticism for encouraging Americans to vote.

The actor told Access Hollywood that he is "very, very happy that she's becoming very vocal and doing whatever she can to help the election in November," according to the Mail Online.

Speaking in a recent TV appearance, the duchess said the 2020 general election is "the most important election of our lifetime."

Her words caused some people to believe she was breaking royal protocol and endorsing the president's opponent Joe Biden.