Prince William criticized for cavalier treatment of Kate, while Harry is praised

It was a floral fumble.

Meghan Markle was caught in an awkward moment involving a bouquet of flowers while mourning the loss of Queen Elizabeth II alongside her husband, Prince Harry, as well as Prince William and Kate Middleton.

In a video captured by a mourner outside Windsor Castle on Saturday, Markle was seen holding the bouquet when a royal aide approached her to ask whether he could take the flowers off her hands. Markle appeared to decline the offer and told the aide she was going to put them down herself before turning back to the crowd with the bundle still in her arms.

But moments later, another aide walked up to take flowers that Harry got from a member of the public and then reached for Markle’s bouquet, too. The “Suits” alum seemed to resist at first, but after the aide appeared to explain the situation, Markle obliged and handed over the floral arrangement.

“The big guns had to step in when Meghan refused to let go of the flowers the first aide tried to take from her as she herself wanted to walk them over to the other tributes,” a fan account tweeted. 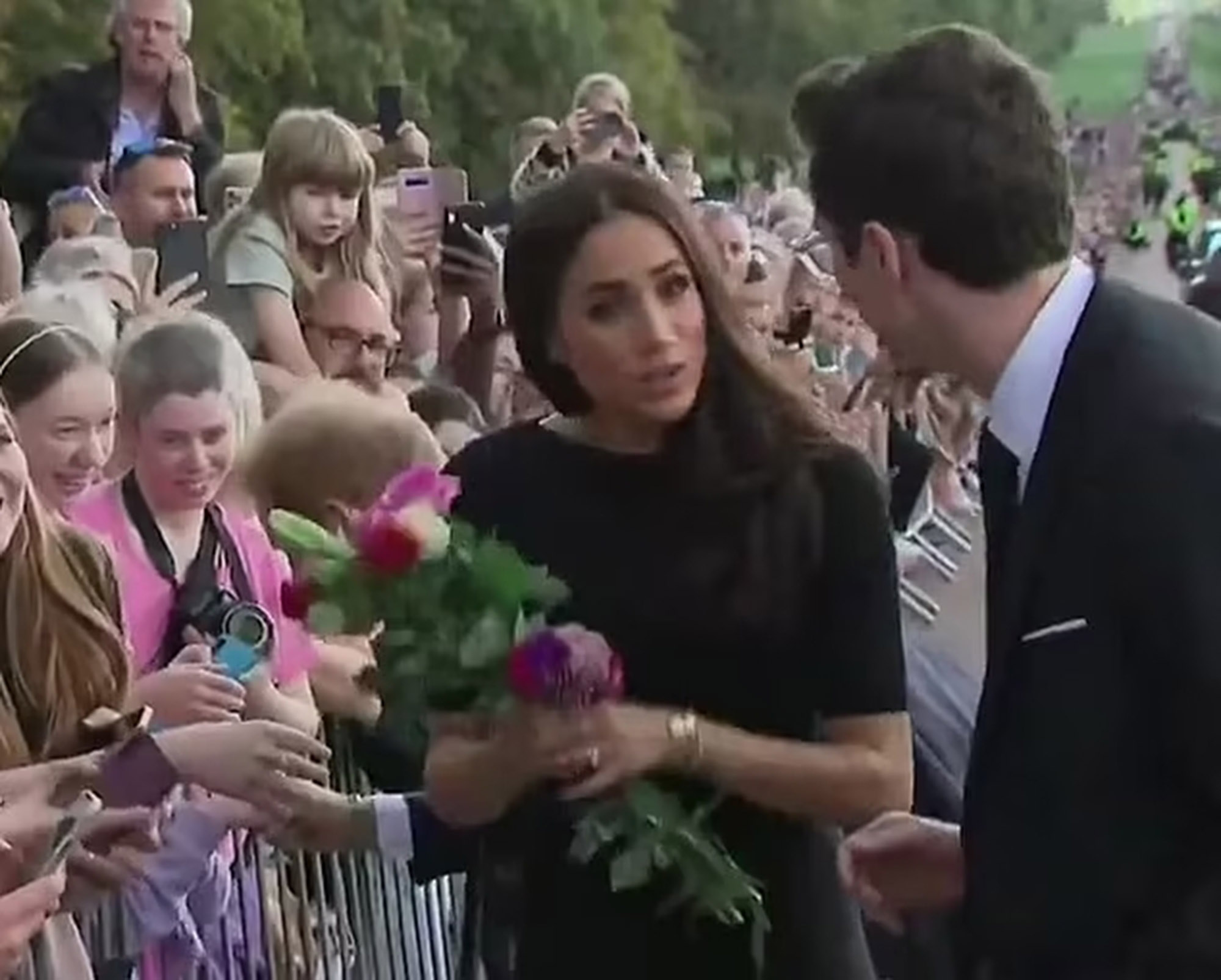 Several Twitter users surmised that Markle wanted to hold on to the flowers and place them down at the fence for photo-op purposes.

“She wanted it for the optics but it got squashed by people who know exactly what she’s trying to achieve.🤣,” one viewer tweeted, adding, “I’m thinking so she gets the money shot when she places the flowers down with the other floral tributes.”

“She probably wanted to be captured and filmed when she walks alone put flowers over there and put an action. Actually, if you think about it, she really is a narcissist, always trying to make everything about her in every occasion! Glad she was stopped!” a second agreed.

“She is absolutely classless, as simple as that,” a third added. 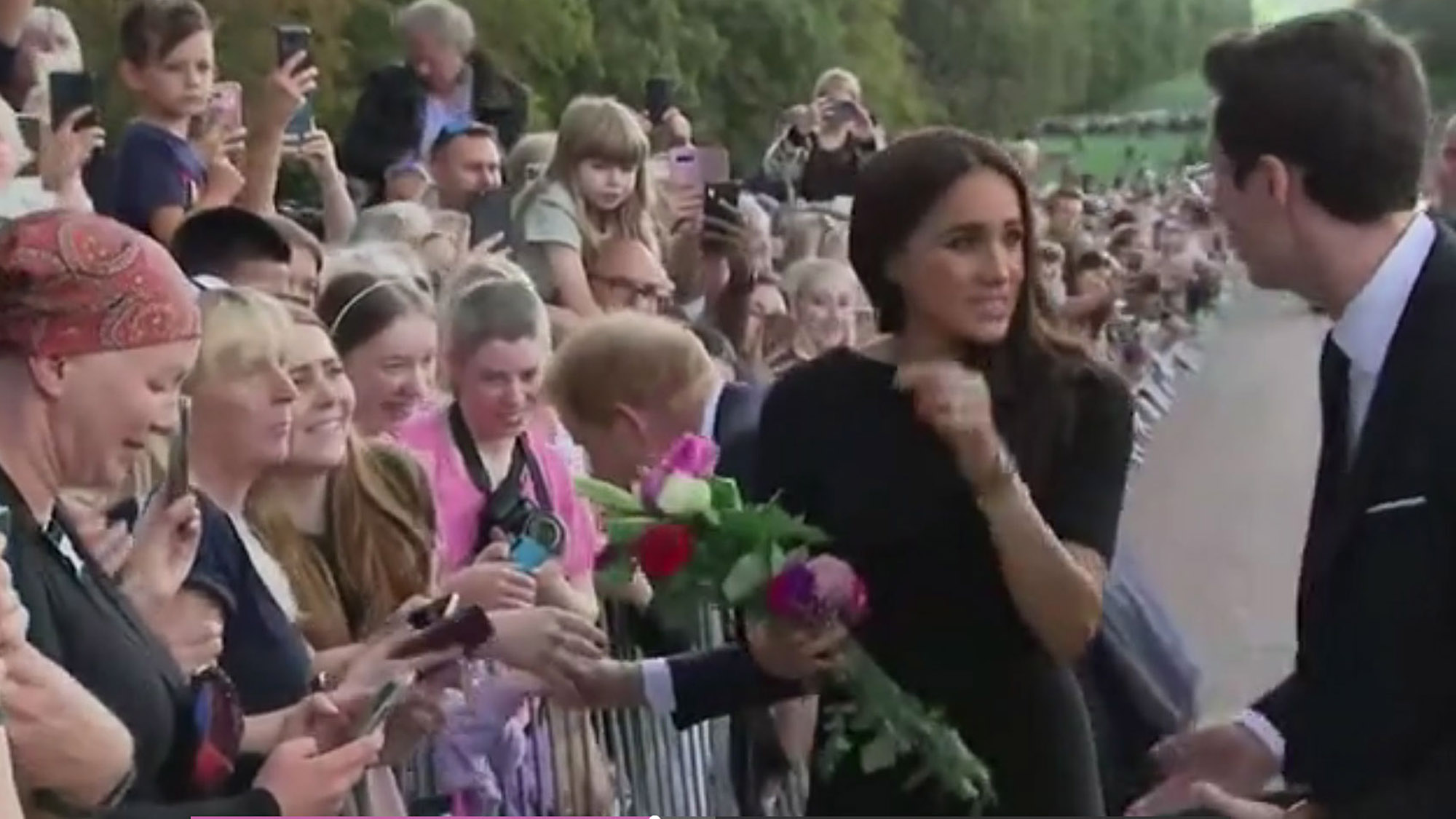 Other Twitter users, however, gave Markle the benefit of the doubt, saying she was just trying to grieve the Queen in peace.

“Can’t believe the Meghan bashing has started already, it’s the first time she’s experienced this and was doing her best she probably promised to lay the flowers down herself and that’s what she was going to do till told by Harry it’s alright to pass them over,” one person tweeted in Markle’s defense.

“She probably didn’t understand that the flowers are taken off them for safety purposes. After all there could be a small explosive device, nerve gas, a poisonous insect, any number of things, concealed in them,” a second fan explained of royal protocol.

“Oh my God……STOP IT!!!! Leave this poor woman alone. Take a breath…..this will play out as it will play out. Be glad the whole world isn’t weighing in on every move YOU make. Enough already,” one more wrote. 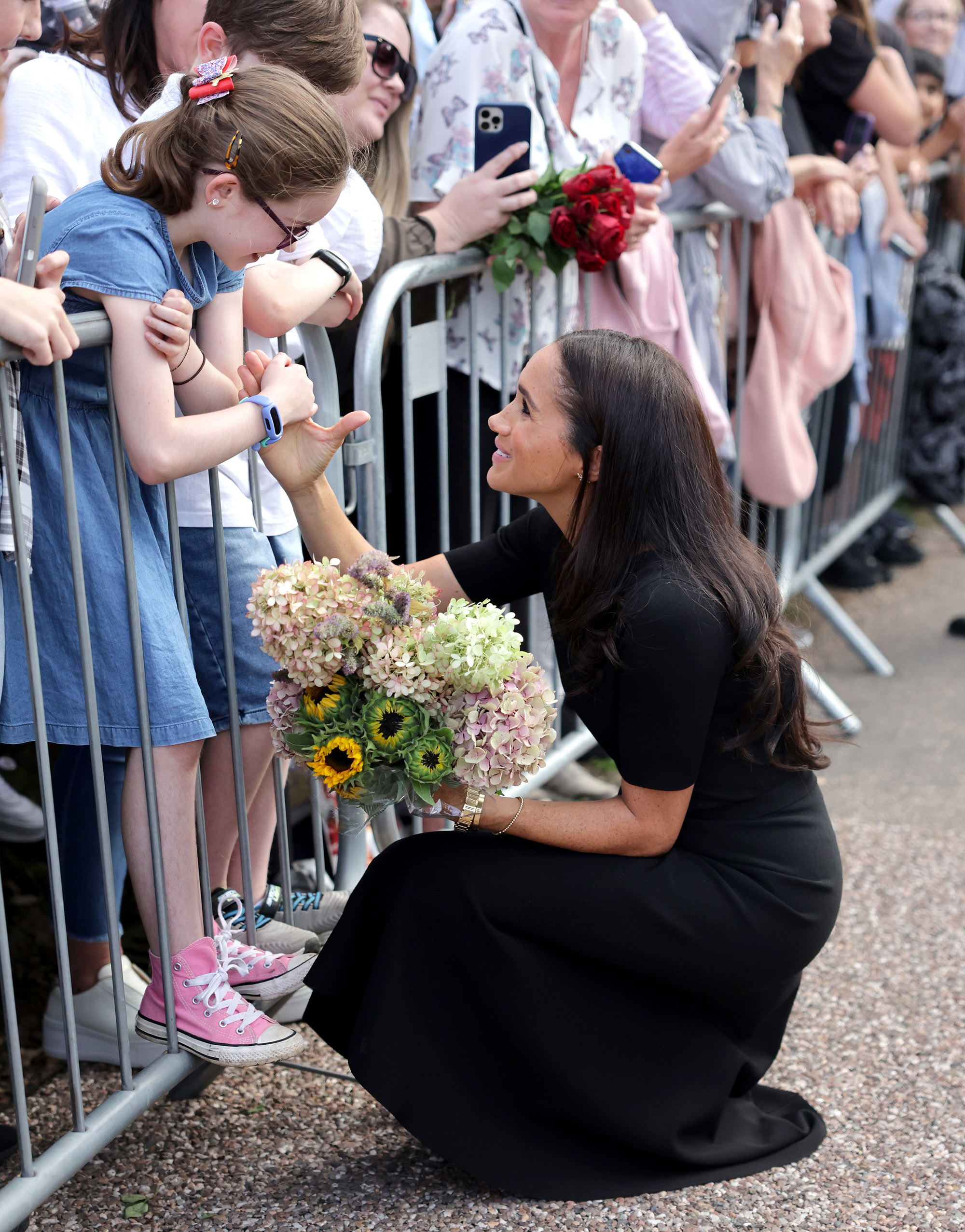 Markle, 41, and Harry, 37, joined William and Middleton, both 40, to lay flowers outside Windsor Castle to pay tribute to the late monarch.

The outing marched the first time the Duke and Duchess of Sussex appeared in public with the newly crowned Prince and Princess of Wales since Commonwealth Day in March 2020.

A royal source told Page Six that William extended the invitation to his estranged brother and sister-in-law, adding, “We are all very grateful — both sides putting all things aside for the Queen.” 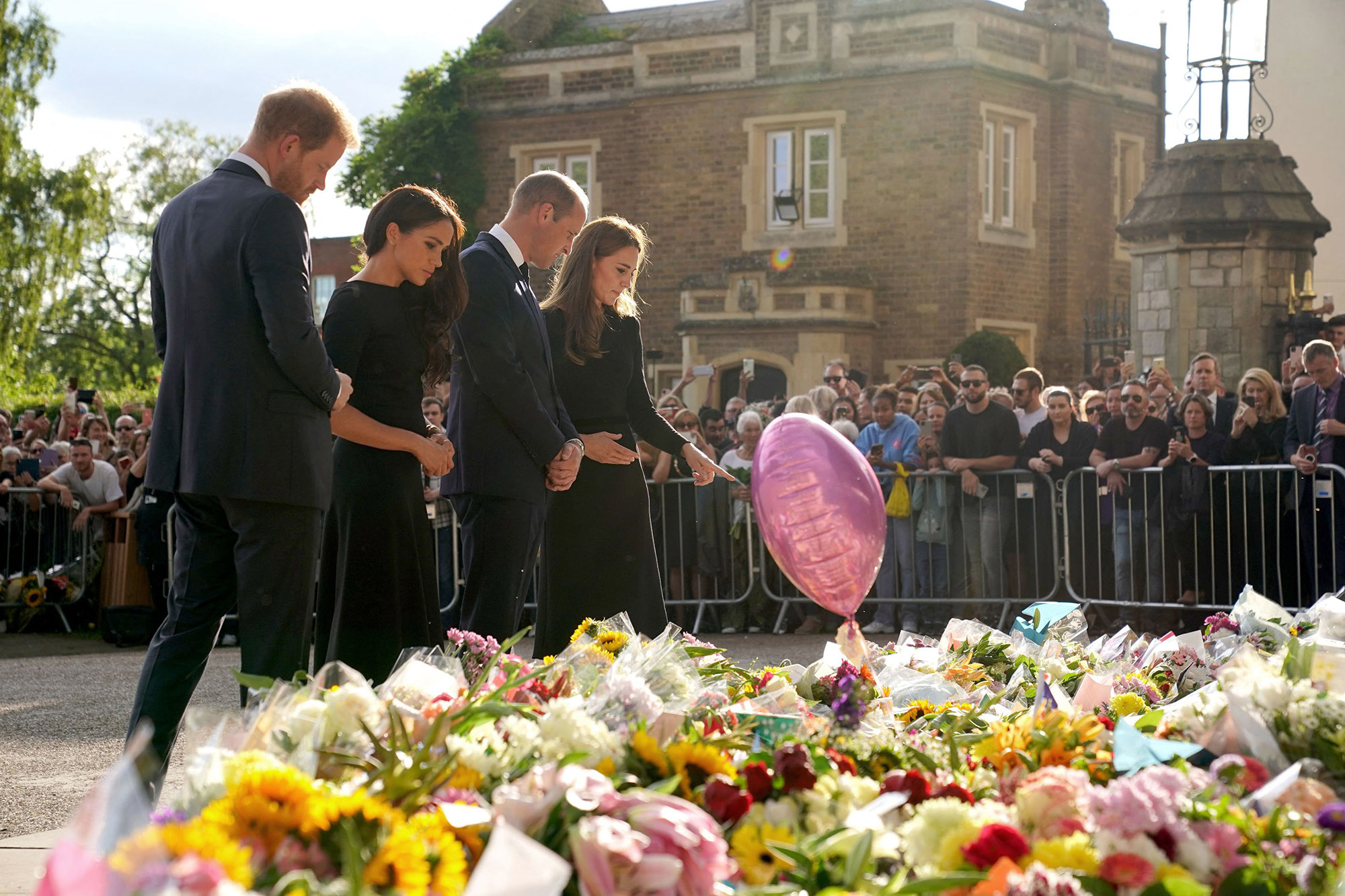 Harry rushed to be by the Queen’s side last Thursday morning when Buckingham Palace announced that her health was rapidly declining, but he arrived after his grandmother’s death — and without his wife, who reportedly feared she would not be warmly welcomed.

“Granny, while this final parting brings us great sadness, I am forever grateful for all of our first meetings — from my earliest childhood memories with you, to meeting you for the first time as my commander-in-chief, to the first moment you met my darling wife and hugged your beloved great-grandchildren,” he said.

Harry added, “I cherish these times shared with you, and the many other special moments in between. You are already sorely missed.”

Markle has yet to release a statement, though the pair mourned the Queen’s loss together by having the website of their Archewell organization go dark.