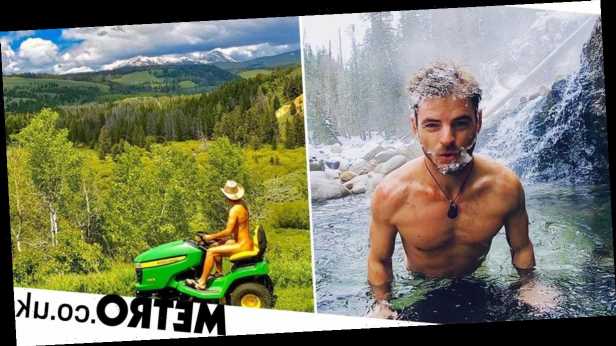 As his nickname suggests, he’s a man who likes to do his farm work completely naked.

Dick has become a bit of an online celeb by herding cattle, chopping wood, and fishing in his family’s 1,800 acres of land, and sharing photos of all his hard, nude work on the @thenakedrancher Instagram.

His love of being without clothes began when he skinny dipped in the hot springs around his ranch, which he has been helping to run since 2017.

‘Anything which involves a blade I avoid for safety reasons. I will chop wood with an axe, but that’s as far I will go – I don’t want to slice anything off!

‘I did once wear chaps and a helmet to use the chainsaw for an Instagram pic, but if I’m honest I regretted it.

‘All my posts tend to be organic and natural, while that one felt like it was mainly for my followers.’

Dick, who is now ranch manager, says his love of nature was awoken as a child growing up in Florida’s Everglades.

He went on to study geology, and found peace in the Rocky Mountains, which sat just a short drive away from his university’s campus.

Impressed by their son’s beautiful surroundings, at the start of 2009, Dick’s parents decided to leave Florida and relocate to the bordering state of Montana.

‘It was always a dream of my dad’s to move to the mountains and have his own ranch,’ Dick explained. ‘He’d been a businessman his whole life and it was his time to enjoy his golden years.’

After graduating in 2010, Dick spent three years working on an oil rig, clearing his student debt and saving.

Then in 2015, he funded a postgraduate degree studying renewable energy at the University of Montana, which was close enough to his parents’ ranch that he could spend weekends working on the farm.

When he graduated, he decided to work on the ranch full-time, then went on to become ranch manager.

His parents are glad he’s found a passion in working in nature, but don’t know that he does all this completely naked.

‘It’s a big old chunk of land for the old man to manage on his own,’ he said.

‘We have 200 cattle that need seeing to all year round, we have a huge hay operation and logging season requires a hell of a lot of man power.

‘Instead of using my post grad degree, I became quite the handy man and that eventually led to me taking over from my dad at the ranch.

‘It was here that I discovered the wonders of geothermal hot baths, as there are dozens of these incredible hot water holes dotted around The Rockies and most have signs saying clothing optional.

‘As kids we ran around naked, so I’ve never been shy and there’s nothing quite like taking a dip completely naked – you feel at one with the world.

‘Once you’ve experienced it, it’s hard to go back.’

Soon swimming in his birthday suit wasn’t enough for Dick.

He said: ‘In the summer heat, working the land can get incredibly hot.

‘One day I was in the field, working on a ditch for the irrigation system and thought, “Screw it – I’m going to get naked”.

‘So I took most of my clothes off apart from my underwear and worked the field.

‘After a few days, I thought, “Damn, I have got to get rid of these tan lines” – so I got butt naked.

‘It might sound funny, but it’s the honest truth.’

Now, Dick does everything on the ranch in the buff, from mowing grass on his tractor to irrigating fields.

In May last year, he took up his friend’s suggestion and started posing pictures of himself working in the buff on Instagram under the alias, The Naked Rancher.

‘It turns out she has a lot of gay buddies and they all went wild for it.

‘They all liked the photo and shared it and before I knew it I had hundreds of followers.

‘I’m straight, but I find it very sweet and very flattering. There are occasions when people, mainly men, will message or comment asking me out on a date.

‘I’m not intimidated by that thought, as I have a lot of gay friends.

‘I might live in a conservative area, but I have an overwhelming desire to be myself no matter what the environment dictates.

‘I’ve never liked being a stereotype.

Dick is keen to emphasise that his job is more than just posing naked – ranch work is tough.

‘I’ll usually wake up about 6am and have a coffee before going to the barn and seeing what work needs to be done,’ he said.

‘It always involves getting on the tractor and chasing some loose cows.

‘I’ll have a short lunch break and work into the evening, before enjoying some down time with my folks – who have no idea about my nudity.

‘I head out fully dressed every morning, then take off my clothes when I arrive at whatever work needs doing.

‘I’ve never been caught, but if and when they find out they’ll probably blush at first, before making fun of me.

‘We’re a very close family and I know it wouldn’t bother them deep down.

‘It’s just not something I’ve ever felt the need to bring up and share with them.’

In the future, Dick hopes to expand his naked ranching repertoire by offering guided tours of the area.

Yes, he would like to be naked for said tours.

He added: ‘It’s incredible part of the world and all these beautiful places are literally in my backyard.

‘I’d love to show people the best things the area has to offer, with guided tours to hot springs, wooded trails and that sort of thing.

‘At first I would probably do it in clothes, but who knows, down the line I can see this place making a beautiful naturist retreat.’