Joe Kennedy III is the most prominent modern Kennedy in politics. 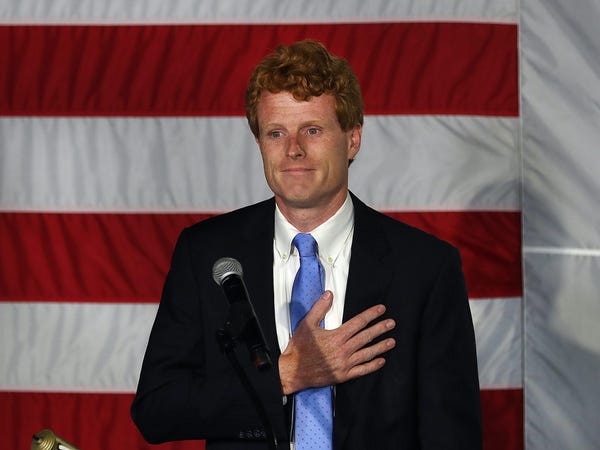 Joe Kennedy III, a grandson of Robert F. Kennedy, has been a United States representative since 2013. His twin brother, Matthew Rauch Kennedy, has stayed more out of the public eye, opting to study business instead, CNN reports.

Joe represents Massachusetts's 4th congressional district and is a member of the House Energy and Commerce Committee. Per his official website, Joe supports the Green New Deal and protection for Dreamers and immigrants under the Temporary Protected Status (TPS) program.

He's also spoken out in favor of gun control. After the mass shooting at Marjory Stoneman Douglas High School in Parkland, Florida, in 2018, Joe said, "We're not doing enough … I can't even tell you how many times we have uttered our thoughts and prayers to the victims and survivors of gun violence and thoughts aren't doing it," during an appearance on The View.

Joe first came to national attention in 2018, when he gave the Democratic party's response to Trump's State of the Union address.

Most recently, Joe lost a senate primary against Ed Markey, becoming the first Kennedy to lose an election in Massachusetts history. Joe is not seeking re-election for his house seat in 2020 and endorsed Jake Auchincloss as his successor in a September 16 tweet.

He attended Stanford University for his undergrad and Harvard Law School. He married Lauren Birchfield, a fellow Harvard-educated lawyer, in December 2012. The pair met in a Harvard Law School class taught by Sen. Elizabeth Warren, and they now live in Newton, Massachusetts, with their two young children.

With an estimated net worth of $46.55 million, per Open Secrets, Joe is one of the richest members of Congress. 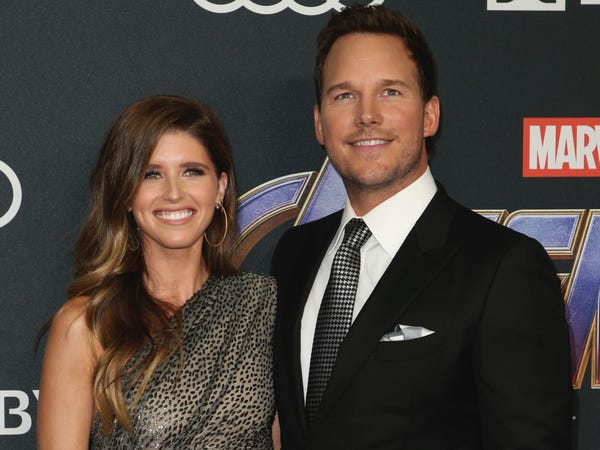 Katherine has written a number of self-help books, including "Rock What You've Got" and "Just Graduated … Now What?". Her most recent title, "The Gift of Forgiveness," was released in March. She interviewed 22 people for the book, from kidnapping survivor Elizabeth Smart to Sue Klebold, the mother of one of the perpetrators of the Columbine school shooting.

In addition to writing, the 30-year-old has been involved in animal rights advocacy, including rescue and adoption, for years. She's a dog mom to a rescue named Maverick, who's also the inspiration for Katherine's first children's book.

Katherine's private life has also been a topic of interest in the press. She's married to actor Chris Pratt, and their first child, daughter Lyla Maria, was born in August. 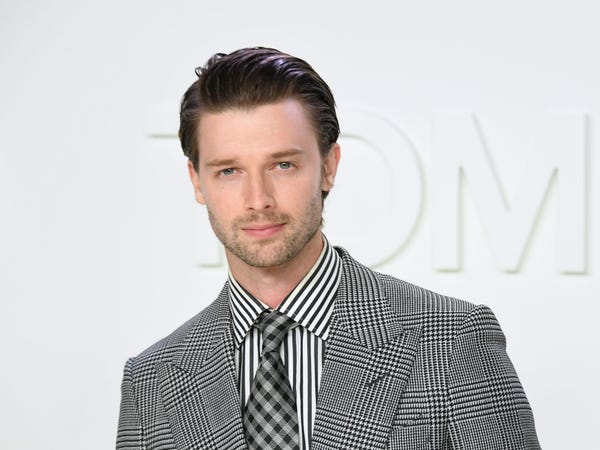 Patrick is a model and actor who has appeared in movies, TV shows, and music videos. He's also known for his brief relationship with Miley Cyrus.

His most recent silver screen appearance was in the psychological horror film "Daniel Isn't Real," coproduced by Elijah Wood. The movie premiered at the South By Southwest festival in 2019 and also stars Miles Robbins, Susan Sarandon's son.

Jack Schlossberg made a splash with his appearance at the virtual 2020 Democratic National Convention. 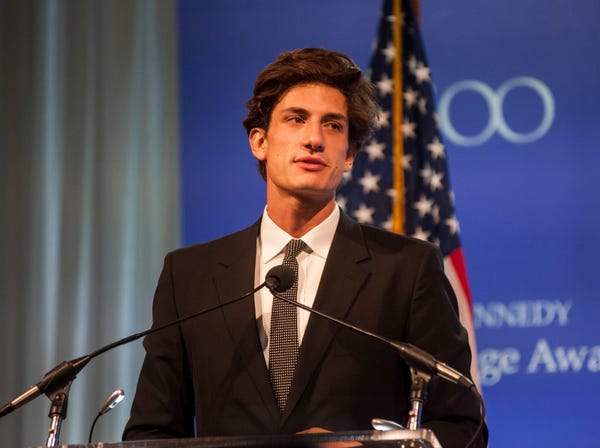 Jack Schlossberg is the youngest son of Caroline Kennedy, who is the former US ambassador to Japan and the only surviving child of former US president John F. Kennedy and former first lady Jacqueline Bouvier Kennedy Onassis. He attended Yale University for undergrad and started studying law and business at Harvard in 2017, Esquire reports.

Jack makes frequent media appearances, sometimes solo and sometimes with his mother, and has written for prestige publications a number of times, with op-eds in the New York Times and Washington Post. In the latter, Jack urged fellow young people to vote for Democratic candidate Hillary Clinton days ahead of the 2016 presidential election.

He made an appearance at the virtual 2020 Democratic National Convention and talked about climate change, health care, and racial justice. He subsequently scored quite a few fans and many, many thirst tweets and has become known for his decidedly quirky social media presence.

Jack's older sister Tatiana Schlossberg is a writer with a focus on environmental issues. 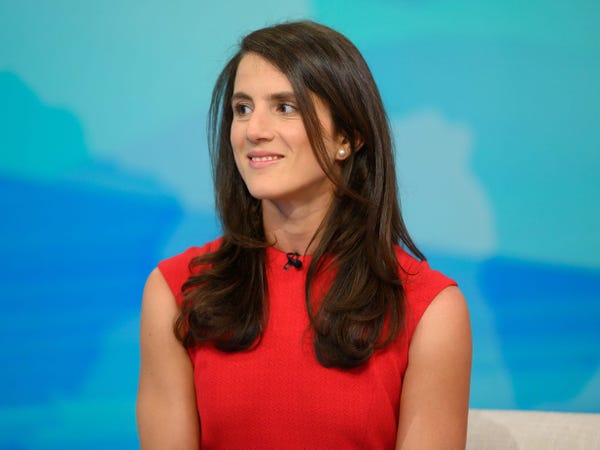 Tatiana is a journalist and has covered climate change for the New York Times Science desk. She earned a master's degree in US history from the University of Oxford in England.

She released a book titled "Inconspicuous Consumption" in August 2019 that Vogue called "a plucky exploration of the myriad ways our casual lifestyle choices come at the expense of the planet and our fellow human beings."

Tatiana married her college boyfriend George Moran, a medical student, in 2017 at her family's estate on Martha's Vineyard.

Jack and Tatiana also have a sister, Rose, who is an actress and has been described as a lookalike of their grandmother, Jackie O. 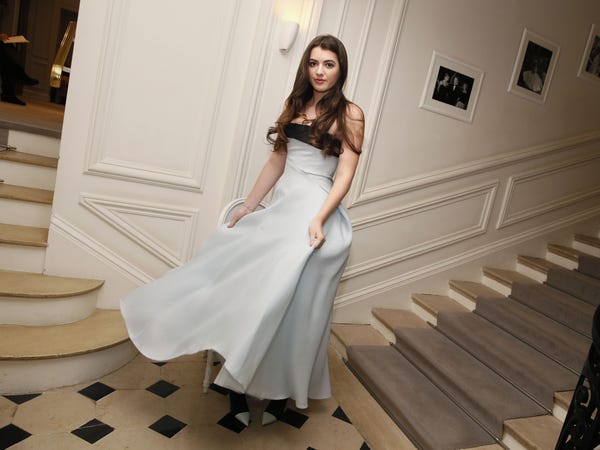 Kyra Kennedy, whose father is environmental lawyer and well-known vaccine skeptic Robert F. Kennedy Jr., was long set to be a major force on the social circuit. She made her formal debut at age 18, at a 2013 debutante ball in Paris.

In 2016, Harper's Bazaar wrote that then 21-year-old Kyra was "the latest Kennedy making headlines" for her partying lifestyle. The New York Times also profiled her social circle that year, dubbing Kyra "a statuesque beauty." The so-called "Snap Pack," named for their frequent use of Snapchat to document nights out on the town, included people like Gaia Matisse, the great-granddaughter of artist Henri Matisse, and Tiffany Trump.

Page Six reported in November 2016 that, according to unconfirmed sources, Kyra's father had enrolled her "a very strict therapeutic [boarding] school" in Italy in an effort to remove her from the limelight. A few months earlier, in April, Us Magazine reported that RFK Jr. had banned his daughter from social media for cyberbullying. She returned to Instagram in September 2019, after an over two-year absence from the app.

Kyra studied at the Fashion Institute of Technology and dabbled in modeling, posing for her friend and fellow Snap Pack member Andrew Warren's clothing line during New York Fashion Week in May 2016. 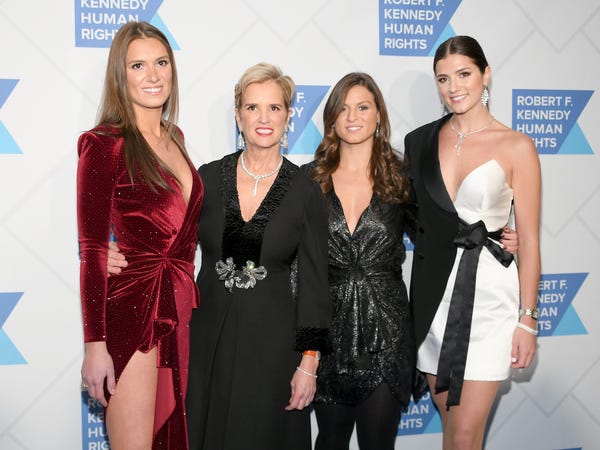 Cara went to Harvard for her undergraduate studies and is currently a partner at Sahar Global Summits in New York City. She also works with the Robert F. Kennedy Human Rights foundation.

Cara's twin, Mariah, studied history at Brown University and works at a consulting and advisory firm.

Michaela, the youngest of the three sisters, graduated from Brown earlier this year and made an appearance at a coronavirus press conference with her father in March.