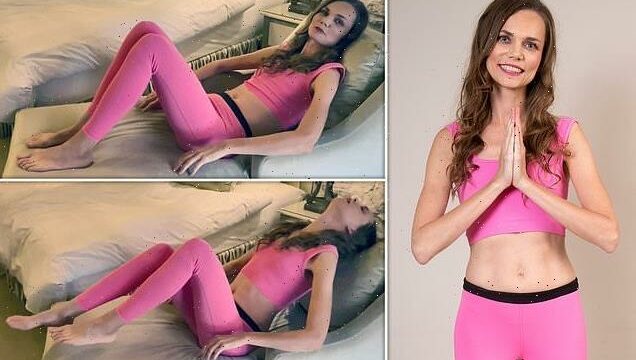 Meet the (ecstatic) diplomat’s daughter who says she can orgasm using only her mind: Tantric guru brushes off scepticism over her wild party trick… and offers advice that could give YOUR love life a boost

Yoga teacher and sex guru Karolin Tsarski has quite the party trick. And the party doesn’t even have to be a wild one for her to show it off.

She could do it in the queue for the post office, she tells me, if she wanted to.

‘I haven’t, not in the post office, but I have done it in public, in a restaurant or walking along the street,’ she says.

‘That’s a more controlled version, where I can direct the energy within.’ The ‘it’ we are discussing is having an orgasm.

Readers with a prudish disposition might want to stop reading now but Karolin, the daughter of a diplomat who wanted her to fly high — ‘but ideally by working for the United Nations’ — believes she has reached nirvana.

Her achievement? Teaching herself to orgasm spontaneously, with no sexual partner, no touching required (not even DIY).

Yoga teacher and sex guru Karolin Tsarski (pictured) has quite the party trick. And the party doesn’t even have to be a wild one for her to show it off

She doesn’t even need to get in the mood. She can just decide she wants to have an orgasm, and — voila! — the magic happens.

Karolin, 33, can even decide which ‘type’ of orgasm to have — an ‘over in a minute’ quickie, or a full-blown chandelier-rattler. What a life skill for a woman to have!

And yes, before you ask, she has been tested and her claims are backed up by science.

She’s not faking it, Meg Ryan in When Harry Met Sally style. Still, it’s hard to witness this party trick in action — Karolin is more than happy to oblige — without raising an eyebrow.

It’s the speed that makes it implausible. One minute we are chatting about why women should wear socks during sex (more on that later); the next she is ecstasy-bound. ‘I can show you now, if you like,’ she says and lies down on the sofa and she’s off, like a rocket.

She has returned to earth, slightly dishevelled, in the time it takes me to put the lid on my pen. Blimey. ‘I can make it last for as long as I want — one minute, two minutes, an hour,’ she clarifies, lest I think her pleasure is always this fleeting.

It’s a strangely unerotic spectacle. All the flailing limbs and jerky movements remind me more of watching one of those crash test dummy videos.

And if she did try this one in the post office queue, I fear someone would assume she was having a fit. Technically, what she’s demonstrating is known in tantra circles as an ‘energy orgasm’, regarded as the Holy Grail to devotees.

It’s not about sex, per se, but about reaching a higher state of consciousness. She first went to tantric yoga classes aged 22 and studying social anthropology in London. She went on to do a master’s degree in sex therapy. Her thesis was on, you guessed it, orgasms.

She seemed to do a lot of homework, and you know what they say about practice making perfect. In yoga circles she is considered an expert. Word of her talents reached the mainstream. She has been on TV in her native Estonia, showing off her skill, but the reaction has been mixed. ‘One TV channel got into trouble I think. They forgot to give the warning about maybe sending children out of the room.’

In January, her pleas to be taken seriously were boosted when the medical journal Sexual Medicine published a paper about her when she offered herself (and, more importantly, her orgasms) up for scientific scrutiny. The findings were extraordinary — because they backed up her claims. Blood tests showed after her orgasmic sessions her levels of prolactin were increased, effectively proving her look-no-hands orgasms were real. 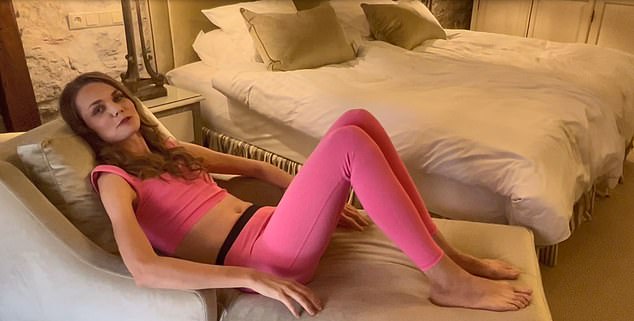 Karolin, 33, can even decide which ‘type’ of orgasm to have — an ‘over in a minute’ quickie, or a full-blown chandelier-rattler. What a life skill for a woman to have! 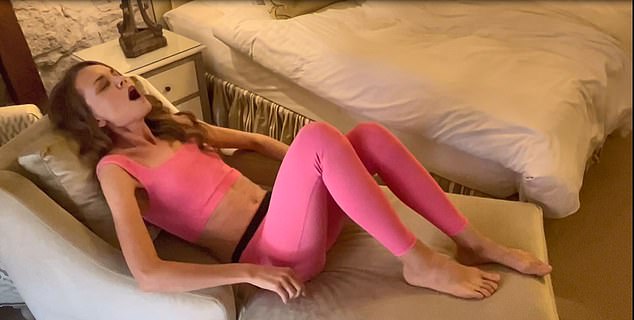 She’s not faking it, Meg Ryan in When Harry Met Sally style. Still, it’s hard to witness this party trick in action — Karolin is more than happy to oblige — without raising an eyebrow 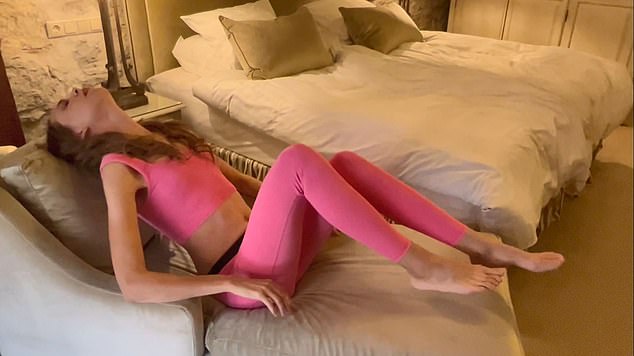 It’s a strangely unerotic spectacle. All the flailing limbs and jerky movements remind me more of watching one of those crash test dummy videos

The report’s co-author, neurologist James Pfaus from Charles University in Prague, says prolactin release is an unambiguous marker of orgasm unless the woman is lactating or has a certain type of tumour. Neither applied to her. ‘The idea here was to see if her orgasms were “real”, meaning that they would be accompanied by an increase in prolactin afterward because there is no way to fake that,’ he adds.

She even travelled to Italy to be hooked up to a brain scanner while she orgasmed too, but that wasn’t a huge success. ‘They told me I couldn’t move, which meant they didn’t get the full effect’.

There was more homework for this study. ‘I had to go home with a sheet to fill in, comparing the different types of orgasms (achieved in conventional ways, alone and in private) so I spent a full day timing and trying to describe them, choosing from a list of adjectives.

‘The hardest part was timing each orgasm. I had to do it with the stopwatch on my phone. It’s quite difficult to do that.’

Why the need for scientific validation, though? Tantra enthusiasts have been claiming to be able to reach higher states of consciousness — spiritual, sexual, emotional — for 5,000 years.

She says her sex therapy work has brought her into the mainstream. And now she thinks the backing of science gives her a certain gravitas in her work helping others, women in particular, achieve sexual fulfilment.

‘Did you know that 80 per cent of women across the globe report sexual dissatisfaction? Heterosexual women, anyway.’

Perhaps the most astonishing thing about Karolin, apart from the obvious, is that she was once one of those women. During her first experience of sex, when she was 17, the earth did not move. Her second experience wasn’t much better. ‘I was willing. I wanted it, but then everything shut down. It hurt.’

She tells me she spent much of her 20s telling men ‘please do not ask to have a relationship with me because I don’t even like sex’. She shakes her head now.

‘Most women think that when they don’t have an orgasm, it is their fault — but that’s because they have been conditioned to think that way.’

Maybe the problem was with the men? Maybe she just hadn’t met the right one? ‘Oh no. I have had wonderful sexual relationships since, but that has been part of the work.’

Karolin was born in Tallinn, Estonia, and has returned there, but she has also lived in London, Spain and Colombia. Her childhood was privileged but not conventional. When she was eight, her father was posted to Russia but she did not want to go so her parents left her behind.

‘They came back at weekends but during the week I went to school and would stay in different places at nights.’

She was a straight-A student and gifted athlete — but someone who was never going to embrace a ‘normal’ job. I did an internship with the UN, but my father was more thrilled about it than I was. I was interested in doing massage or being a social worker.’

After her disappointing first experiences of sex, she made it her mission to improve it — to have what she thought every other woman was having. In London, she went to a tantra library and devoured every book she could.

She consulted a therapist because of her inability to enjoy penetrative sex. ‘I was told I just needed to relax’. She credits one boyfriend, who was also into tantra, with helping her do that.

‘He was super helpful because he said, “I am not going to have sex with you. You are not ready”. I couldn’t believe it. I said, “I am, I’m ready!”. I thought I could get him into bed, but we didn’t have penetrative sex for two months.

‘We were intimate, but one of the things I learned in the workshops was about taking the pressure off.’ It worked! Can she share any tips this man taught her?

I start to wish I hadn’t asked . . . she goes into way too much detail about tantric teachings on the need to delay orgasm, and directing energy away from the genitals to facilitate a full-body orgasmic experience.

Any simple tips? ‘One amazing thing he did was throw me off the bed and make me do a headstand. It forces the blood away from the genitals . . . Oh, and socks.’ Pardon? ‘This is scientific fact. Women need to be warm to fully relax and let go — which is the key to everything.’

She learned a lot in workshops in her 20s. They sound quite . . . um . . . hardcore, and yes, some of them did involve having sex with other participants.

She now feels she went too far down the tantric sex workshop route. Some of the experiences she recalls, particularly in Colombia, are actually shocking.

Some practices — particularly involving male sex gurus ‘instructing’ women, to help them find enlightenment — sound like textbook abuse to me. And to her, it seems. Sort of. ‘I wouldn’t join the MeToo movement and I wouldn’t call myself a victim of sexual abuse, but I was very uncomfortable because I didn’t have the backbone to say no.’

Her other big breakthrough moment was when she first had an ‘energy orgasm’. That happened when she was in the hands, so to speak, of a teacher.

‘I gave him credit for it, but actually he wasn’t touching me, he was just guiding the energies. After that I realised, it was me doing this. It was all internal.’

She had cracked it: the ability to not only orgasm, but to orgasm with her mind, using meditation, deep breathing and this all-important ‘letting go’.

‘By this point it just seemed natural, but my friends would say, “you know most people can’t do that, Karolin”.’ So here we are. She has since written a book about sex. ‘I gave it to my parents for their anniversary,’ she says. Oh Lord. What do they think of her career path?

‘They are very supportive. I mean they do not entirely understand me, but they love me.’

‘And they have been married for 40 years so they are my role models. Although I don’t know what goes on in their bedroom.’

Which brings us to her own relationship history, where this story gets quite poignant.

While she has had ‘wonderful, meaningful relationships’, most have only lasted for a few years. She has been single now ‘for quite a while’. And sadly so.

‘Just because I teach sexuality, does not mean I am good at relationships. But yes I would like to be in a lasting relationship.’

Are men put off by her sexual independence? That’s complicated. What she has learned has ‘enhanced my relationships, and allowed me to be honest about my own needs’ but Karolin admits, with a little smile, that a woman can’t be too honest. ‘A man needs to feel he is contributing.’