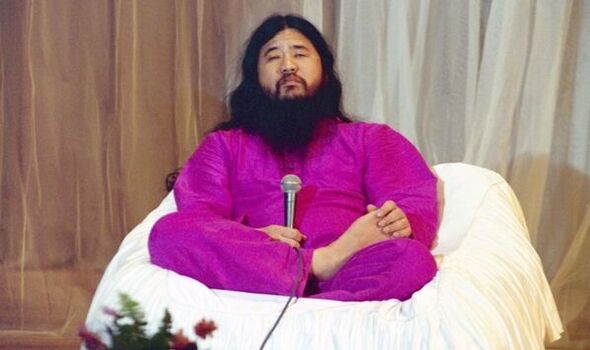 Those behind it were members of Aum Shinrikyo, a Japanese religious movement founded by Shoko Asahara. He predicted that humanity would end in 1997, save for the elite who had joined Aum, whose name means Supreme Truth. The ploy worked – by 1992 it had around 20,000 members and funds of more than $1billion.

But Asahara had plans beyond mere wealth and the group used the cash to produce chemical and biological weapons in state-of-the-art laboratories.

Nine months before the attack on the subway, sarin, one of the deadliest toxins ever to be created, was released from a truck in a quiet residential area of Matsumoto.

The targets were three judges who lived in the area and who Asahara suspected were about to rule against the cult in a property dispute.

The judges survived, but eight people lost their lives.

Despite receiving a tip saying Asahara was responsible, he remained at large.

Each had a plastic bag of sarin, wrapped in newspaper, which they punctured with sharpened umbrellas before fleeing in waiting getaway cars as their victims died.

This time Aum was firmly in the crosshairs.

Two days after the attack police raided its Tokyo offices and a laboratory headquarters, where they discovered raw material for manufacturing sarin.

In May Asahara was arrested, along with more than a dozen fellow cult members.

Eventually around 200 people were held, and the trials continued for years.

Asahara was convicted of masterminding the subway attack and was sentenced to death. He was executed, along with six other leading members of Aum, in 2018.

Also on this day…