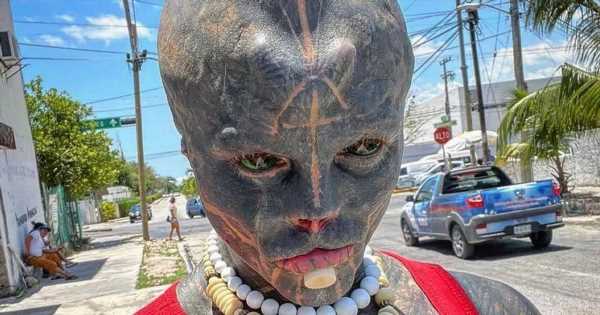 A Frenchman obsessed with altering his appearance to resemble a 'black alien' has freaked out his fans by posting a video of himself waggling a forked tongue through a hole in his face.

In the clip posted to his Instagram, extreme body modification fetishist Anthony Loffredo can be seen poking his surgically split tongue out of an 'extra mouth', a dissected opening just below his lower lip line.

The 33-year-old – who's already lopped off his own nose and ears and stained his teeth black – can then be seen rolling his eyes (which are tattooed green) into the back of his head.

The footage – uploaded to his Instagram account, the Black Alien Project – drew a very mixed reaction from his 700,000 plus followers.

Regarding the latest footage, one commented, "WTF?" while another added, " You need a psychiatrist."

A third also questioned his mental state with a post which simply said, "Pure coconut."

Meanwhile, others suggested Loffredo – who appears naked save for a skimpy red towel wrapped around his waist – should start up an OnlyFans account.

"I would TOTALLY buy a subscription to that," said one follower. "He is oddly attractive," concurred another.

The social media star's page currently states that he's 87% complete in his goal to become the most modified human in history.

He has has travelled the world and spent a fortune gradually transforming his physical appearance into something that is not of this Earth – a mission which has also seen him lop off some of his fingers to create a 'claw hand' and insert multiple implants under his skin to enhance his extra-terrestrial look.

And last month he even hinted that he's considering splitting his penis in two.

Probably his most drastic and eye-watering modification yet, he posted a sketch of two penises attached to the same scrotum, although one which only appears to contain a single testicle.

He previously described his obsession as helping him develop "inner peace."