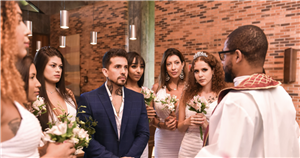 The wedding took place in a Catholic church in the city of São Paulo.

Arthur was previously only married to wife Luana Kazaki, with the pair already going on a honeymoon together.

However, they decided to formalise the marriage with nine other women to celebrate free love and protest against monogamy.

In their first marriage, Arthur and Luana gained notoriety by developing photos of their honeymoon in a liberal French town, in Cap D'Agde.

In the controversial French city, the wearing of clothes is prohibited, and both enjoyed the trip completely naked in various tourist spots in the city.

The pair, who are swingers, are known for their love of stripping off.

They've previously hit headlines for parading around naked in some of the 'most liberal places' in the world.

Speaking about their love of being nude, the duo said back in March: "We are going to travel around Europe and show the most liberal places in the world."

The pair also gained attention back in February this year as they revealed that they were earning £56,000 a month on OnlyFans by inspiring others to have sex.

To help during the pandemic, Arthur and Luana shared their sex tips with those in relationships who were struggling in the bedroom.

Speaking about their venture, the pair said: "We were able to inspire other couples to have sex in the pandemic.

"We teach everything through the platform, from different positions to even encouraging couples to go swinging.

"Many did not know or were afraid of the techniques, but our tips made couples get closer at home."