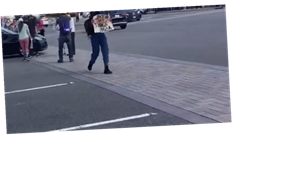 Dozens of people peacefully gathered in Diamond Bar, California, on Sunday to protest the ongoing surge of violence against Asian Americans in the U.S. But as they did so — in a city where more than half of residents identify as Asian — they were met with violence, as a man was seen on video driving his car through a crowd crossing an intersection.

The Los Angeles Sheriff’s Department said Tuesday it is investigating the incident as a hate crime.

Video of the incident posted on Instagram shows demonstrators legally crossing an intersection. After a few of the demonstrators were seen yelling at a car that was several feet over the stop bar in the road, the driver started to honk his horn. Seconds later, he drove through the group of protesters, made a U-turn just feet from oncoming traffic, rolled down his window, and yelled “f*** China.” The driver did not appear to hit any of the demonstrators.

Another video showed a man who appeared to be the driver again yelling “F*** China.” The individuals who took the videos have not returned CBS News’ request for comment.

In a news release, the sheriff’s office confirmed that a suspect, which it identified as a White man in his 50s, “drove through a red light at the intersection and antagonized [demonstrators] by yelling racial epithets.” The driver has not yet been identified, but the sheriff’s office said video footage captured his license plate.

Los Angeles Sheriff Alex Villanueva tweeted earlier this week that “Hateful acts like this are not welcome in Los Angeles County and must STOP!” Hours later, he announced that the situation is being investigated as a hate crime.

Los Angeles County Supervisor Janice Hahn tweeted that the incident happened “just a few minutes” after she left the rally and condemned the man’s actions at an otherwise peaceful protest.

“I am disgusted,” she said Monday. “This kind of racist vitriol happens far too often in our communities and is exactly why so many AAPI residents — and other residents of color — don’t feel safe in their own neighborhoods. This has to stop.”

Diamond Bar councilman Andrew Chou also attended the rally. On the day of the demonstration, he tweeted, “Together we are stronger, and together we will overcome.”

Proud to stand with hundreds of residents from Diamond Bar today to denounce hate and violence against the Asian American community. Together we are stronger, and together we will overcome. #StopAsianHate #diamondbar pic.twitter.com/k6JUvxwHgI

He told CBS Los Angeles that the incident serves as “an unfortunate reminder that hate incidents can happen anywhere.”

“We are a town with 57,000 people, 57% of which is Asian-American, and this literally happened in the middle of an anti-Asian hate rally,” he said, telling the affiliate that while incidents like these are rare in Diamond Bar, they are gaining traction in neighboring areas.

“I’m hearing a lot from my residents that they worry from their relative and friends who may be in other cities where incidents like these are happening more frequently,” he said.

More than 58% of Diamond Bar’s population identifies as Asian, according to the U.S. Census. Over the past year, nationwide crimes against Asian Americans have surged 150%.