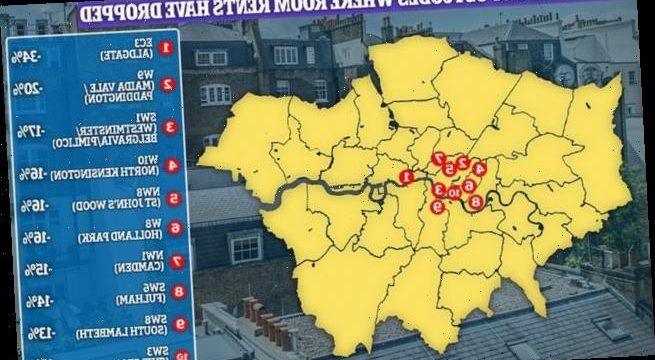 Revealed: London postcodes where rent has dropped by up to a THIRD in a year ‘as young professionals flee the city’ – and the suburban areas seeing the most growth

The London rental market has been rocked by the coronavirus crisis with prices dropping by up to a third the last 12 months, data reveals.

Properties in postcode EC3, which covers Aldgate in Zone 1, have been most affected, according to the price index by SpareRoom. Rooms are 34 per cent cheaper to rent compared to this time last year, dropping from £1,244 to £824.

The area is in the heart of east London and boasts good transport links to the City and other professional hubs which have become less desirable with the rise of remote working. 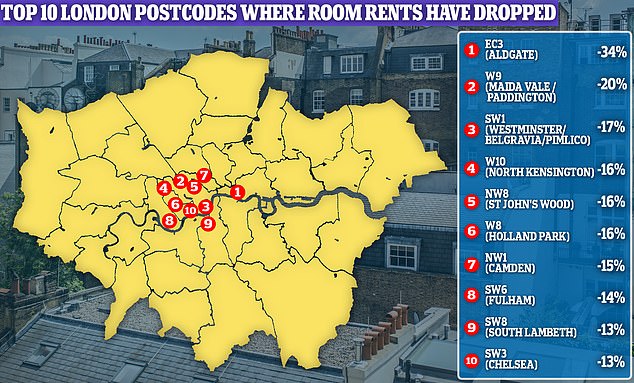 The London rental market has been rocked by the coronavirus crisis with prices dropping by up to a third the last 12 months, data reveals. Pictured, a map illustrating the postcodes that have seen the biggest decrease in rental prices since the third quarter of 2019

Postcode W9, which covers parts of Maida Vale and Paddington, has seen the second biggest rent price drop (20 per cent), followed by SW1 (17 per cent), which covers Westminster, Belgravia and Pimlico.

The reverse of the trend is seen at the other end of the index, with suburban parts of London seeing the biggest growth in rent.

Matt Hutchinson, director at SpareRoom, noted: ‘Once again, London dominates the headlines in terms of falling rents, and it’s generally the most expensive neighbourhoods that are worst affected.

‘With so many young renters leaving the Capital, either to find cheaper rents, to move with family, or to leave the UK altogether, it’s hard to know when, or even if, London will regain the appeal it had before the pandemic. 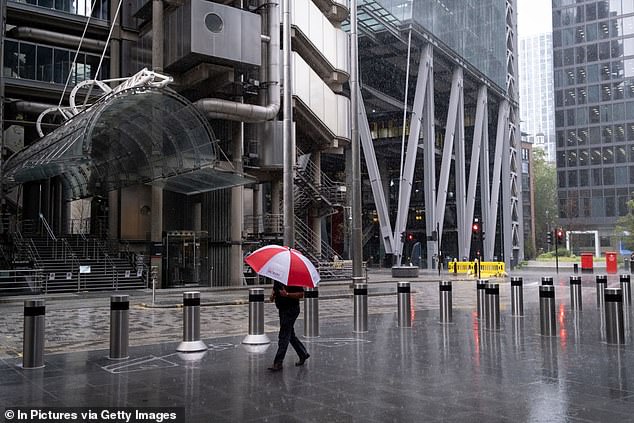 Properties in postcode EC3, which covers Aldgate in Zone 1, have been most affected, according to the price index by SpareRoom.

‘What we’re seeing might just be a temporary shift in the rental market, or it may be the start of the UK’s rental map being redrawn permanently.

‘Even if young renters do return to the capital in their previous numbers, affordability will be their absolute top priority, in a city that already had an affordability crisis coming into this.’

It incorporates data – includes average rents and supply – from over 500,000 room ads in shared accommodation across the UK.

Shifting fortunes: How the cost of renting in London has changed

LONDON POSTCODES WITH THE BIGGEST INCREASE IN RENTAL PRICES