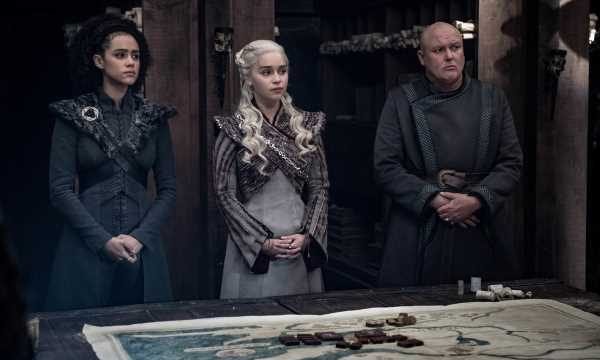 It seems to be the consensus that the military strategy for the Battle of Winterfell in Game of Thrones Episode 3 was…lacking. And now that Dany plans to attack King’s Landing, it’s reasonable to question how thought-out her plans are. After all, she was flying her dragons in broad daylight, which is when Euron took the opportunity to mow Rhaegal down (RIP). So what are Dany’s plans for taking King’s Landing, and will they prove to be more strategic than the last battle audiences saw in Episode 3?

The Dragon Queen is seriously pissed off that both her beloved Missandei and Rhaegal were murdered in Episode 4, so she may not be thinking too clearly right now. And since Missandei’s final words were "Dracarys," that may be just what Dany will do — burn the whole damn city to the ground. That said, Euron Greyjoy still wields the scorpion — that pesky crossbow that Qyburn designed directly for the purpose of killing dragons.

But first, let’s talk a bit about what a disaster the Battle of Winterfell was. In fact, Vox had military experts critique their strategy — Ryan Grauer, an associate professor of international affairs at the University of Pittsburgh, and an Australian combat veteran named Mick Cook. "The way you prepare for a siege is you don’t march your forces out into the middle of the open to fight a numerically superior enemy," Cook explained. "You let the enemy invest in trying to beat your defenses, and the defenses were all back to front from my point of view."

Furthermore, Cook pointed out that "they’ve got all this dragonglass, and they didn’t coat the top of the walls with it. That would stop [the wights] crawling over for a bit." And even though Dany’s dragons functioned as air support, Grauer said he wasn’t convinced that the creatures did anything notable during the battle.

"[E]specially when you’re fighting an adversary that has effectively unlimited bodies to throw at you, it’s not clear that burning up some reanimated fighters just so others can take their place is a good use of that particular resource, especially if you believe that dragonfire could destroy the White Walkers, and perhaps the Night King himself," the expert said.

It’s also surprising, seeing as Tyrion was supposedly a military mastermind and orchestrated much of the successful Battle of the Blackwater in Season 2, Episode 9. However, the Lannister seems to have forgotten his background in military strategy. Furthermore, SuspiciousJack tore apart Dany’s decision to fly straight at Euron’s ships — a scene which happened halfway through Episode 4.

For that reason, it’s unclear how much faith audiences should have in what’s about to go down at Cersei’s doorstep in Episode 5. That said, Game of Thrones actor Emilia Clark spoke animatedly about the upcoming battle on Jimmy Kimmel Tonight, advising audiences to "find the biggest TV you can."

As for what Dany’s game plan for King’s Landing, here’s what we know. During a strategy meeting with half of her war council, Grey Worm promised that they would "storm the city" and kill all of her enemies. Varys, however, advised Dany not to do so, pointing out that innocent people would die. Tyrion suggested that they should try and reason with Cersei, asking her to surrender.

Khaleesi responded, "They should know whom to blame when the sky falls down upon them." And all of this is before Missandei’s tragic death, so whatever strategy they may have had (which didn’t sound too fleshed out, to be honest) may have fallen by the wayside. My money is on Dany riding Drogon throughout the battle and just burning people to a crisp, left and right.

Furthermore, the showrunners appear to have moved King’s Landing away from the waterfront, since the capital is now land-locked (or lest we forget the aforementioned Battle of the Blackwater?). Or perhaps there’s a drought happening down south that we don’t know about Whatever the case, it appears as though the battle will have to take place on foot, rather than at sea. However, that would be a huge waste of Euron Greyjoy’s Iron Fleet, so perhaps there will still be a naval element to the battle.

But whatever Dany’s strategy is for the Battle of King’s Landing, audiences will soon find out how successful — or not — it will turn out to be. Dracarys!